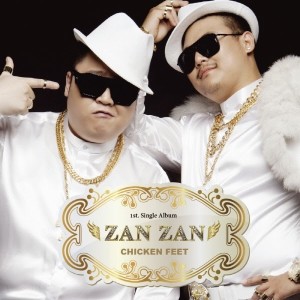 Before I get down to analyzing the intricacies of this video, let me just say it’s a tragicomedy. Not in the Shakespearean sense but rather the colloquial – like tragic and comedy, like a sad story which is actually funny, or a funny story which is actually sad, or a story gone weird… I don’t really know. What in the world do you expect from a video titled “Chicken Feet”?

Humour, I know but Zan Zan is not one to keep up with expectations; it exceeds it.

The music video by rookie ballad duo Zan Zan, comprising of members Yang Jung-mo and Park Min-goo, featuring Crayon Pop’s ChoA and Way takes post-structuralism to another level and rattles our way of looking at life. It picks up standard tropes and symbolism, tweaks it and pointedly questions whether only certain types of symbols qualify to be a trope in romance. Is there a hierarchy of analogies in the genre of romance and tragedy? Where does the privileging of certain signs come from? Which class of people decides the value of overused signs? Am I exaggerating or am I trying too hard to be sarcastic?

Complications don’t arise from grand issues; they crop from the simplest events. Here the simple event involves Park Min-goo lamenting his break-up with Way in a street side chicken stall while he gorges on chicken feet and reminisces the time gone by. ChoA, the owner of the stall, occasionally comforts him.

This is the basic premise. And now, let’s discuss the embellishments.

The duo is dressed in black and is singing from evening to dawn. Since there is no scene change one can’t really argue that they were moping over their lost love on different days. No – they were moping from evening to dawn with joggers as their audience. On top of that, they are wearing ridiculous hats and are decked in gold chains. Oh! And wearing sunglasses. At night. All this would have fit if I could say, for sure, that this video was only supposed to be funny. 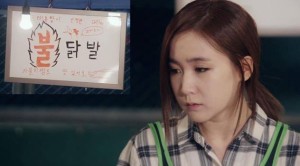 There is often a fear about music videos failing to deliver their intended message, of storylines being too ambiguous and open-ended. Zan Zan doesn’t allow that as their expression of grief puts veteran theatre actors to shame. It’s loud, it’s animated – their whole body is grieving. The Niagara Falls streaming down their faces has led to the speculation that they are not actually crying over a break-up but over the death of Way. Zan Zan is that convincingly dramatic.

In contrast to such brilliant acting, you have ChoA who really doesn’t give a damn about these annoying customers. The fact that she wants them off her turf is too visible when she half-heartedly comforts him. I guess some people just don’t understand pain and emotions.

This is one video where I could have done without translations because I thought that the video was rather self-explanatory but then came the lyrics and threw me in a whirlpool of doubt and distrust.

The lyrics actually make sense! They seem more like prose-poetry but they fit the mould of a tragic ballad, if not for the chicken feet that is. The song has the stock lines of “Looking at the pictures of you that I still can’t erase makes my heart ache” and “Yes I love you, I can’t forget you” but then you have the revolutionizing role of the chicken feet.

There is a specific term used to identify stock images of romance, tragedy etc. but since I fail to remember it, I’ll just explain it through vague descriptions and examples. Within the realm of art and literature, certain standard tropes have been used to such an extent that they cannot usually be meddled with i.e. while one can say “you are as beautiful as a star” one cannot say “you are as beautiful as a shiny doorknob.” 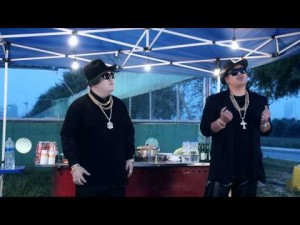 I guess that makes it a little sad.

To complicate matters further, Way and ChoA are twins and Min-goo doesn’t realize it till the very end of the music video despite her having comforted him 50 billion times. What kind of a lover is he if he is unaware of his ex-girlfriend’s twin sister?

The music video clearly appeals to our humorous sensibilities however, I feel like a bad person every time I laugh at it. I am assuming that this is the magic of the video, that it makes you feel bad for something which you think/speculate/conjecture to be quite hilarious. Or maybe it’s just me.

On a less dramatic and surer note, the duo has excellent and seasoned singers. The ballad, while nothing spectacular, does showcase their vocal skills splendidly and is actually quite a good listen — perfect as an OST — once you get over the lyrics. Together with the interesting music video, it manages to make for quite a memorable debut receiving a 3.25/5. The 0.25 is simply for “what the hell” element.