The district of Gangnam. A place of decadence, affluence, and……horses? 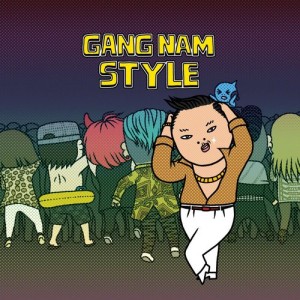 Psy, Berklee School of Music alum and resident purveyor of quirky and humorous social commentary, has returned with his latest album, Psy’s BEST Sixth. It’s been two years since Psy’s return to the music scene with Right Now, after becoming the latest addition to the YG Family. You can always count on Psy to produce crazy and off-kitler music with lyrics laden with insightful and offhand comments on anything, from the state of music to society in general. It’s guaranteed that Psy will be able to create amazing stages regardless of the quality music, with his boundless stamina and energy; it’s impossible for me to believe that Psy’s in his mid-thirties.

“Gangnam Style” is as wild and fun as his previous promotional track, “Right Now,” with a hook that’s bound to stuck in your head all day and have you saying “Oppan gangnam style” to any unsuspecting victim. It’s a fun, light-hearted song with heavy synths that don’t bog down the song. Psy’s rapping style makes the song sound playful and teasing, especially within the verses preceding the chorus. The chorus is accompanied by a smooth bass line that picks up every so often with a synth.

The only things that I know about Gangnam is that it is home to SM Entertainment and JYP Entertainment, but watching the MV for “Gangnam Style” made me wanted to visit Gangnam for other reasons than stalking EXO-K and Jinwoon.

The muse of Psy’s song, Gangnam, looks beautiful in Psy’s MV–Gangnam’s tourist agencies should replace their commercials with this MV–especially in the port scenes and the long shots of the city life. Psy is a busy man in this MV, going from his beach playground, to gallavanting near a horse stable, merry-go-round, the subway station, to a tour bus full of adorable ahjummas. By the looks of it, Psy seems to be spreading his “Gangnam Style” around town with his lasso dance. Judging by the lyrics, it’s either a metaphor for catching the girl’s of your dreams, or it’s a sexual inneundo. My money’s on the former. The MV is as nonsensical as you can get, but if you could apply a storyline–a very loose one–to the MV, it would be that Psy is on the hunt for his “sexy lady,” who appears in the form of Hyuna, during the subway scene. He then proceeds to convey his love for her through dance. Okay, there isn’t much of a storyline and coherency, but does that make it a bad MV? No, it’s an amazingly silly and fun MV, with cameos of Noh Hong-chul and his pelvic thrusts pelvic thrusts to Yoo Jae Suk looking like he stepped out of the 1970s mod scene to a flash mob that would put Wonder Girls’ flash mob in “Like This” to shame. The editing in this MV fits with the flow of the song seamlessly, even Psy jumps from place to place.

Definitely one of the highlights of the MV is the choreography. With the sexy lady dance and lasso dance, it’s not an overly complicated dance, but it fits in with the flow of 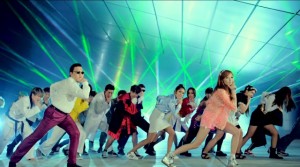 the song, reminscent of signature hook song dances, but nonetheless, Psy nails it. He even pulls the dancing off better than his back-up dancers. However I do think the star of the MV’s choreography was Little Psy, who easily out-dance several people much older than him, including myself. Psy’s energy and vivacous stage presence is at its’ all-time high, making the MV all the more entertaining to watch. Psy is an one-of-a-kind performer, and his long absences, although tedious, makes it worth the wait, especially with a splash of a song and MV like “Gangnam Style.”

Psy is what K-pop needs, and should always be like, a crazy and quirky personality that whose music is adrenaline to the ears and can easily have you dancing around without a care. Welcome back, Psy, we missed you.