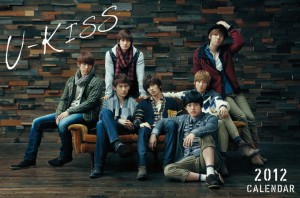 U-KISS has a history of having trouble standing out. Starting off on the wrong foot with a series of unspectacular Brave Brother tracks, U-KISS just seemed to fail at attracting attention to itself. And it wasn’t even a lack of talent that attributed to their lack of success; it was just that they were just so… generic. The music they promoted had no individuality at all to set it apart from all the other groups they competed with, and the multilingual concept they had was just not doing it. The electronic songs they had were for the most part, uninspired, and no individual member managed to garner much interest.

… And then came “Neverland.” This song was basic U-KISS electronic stuff, only better. U-KISS experienced a dramatic increase of quality, and the matter of whether that increase was due to the member changes that played out near that time or whether their company, NH Media, finally decided to give them worthy material is still arguable, but from there-on, U-KISS stopped being generic. They were able to get the attention they needed. However, many spectators expected this song and album to be U-KISS’ peak in their musical career. Spectators weren’t sure U-KISS would be able to grow artistically. Japanese promotions only further supported that thought as Japanese single “Tick-Tack” was basically a sequel to “Neverland.”

So with U-KISS’ most recent comeback with mini-album Doradora, was U-KISS able to move forward from their “Neverland” days?

1.“Doradora”
The album opens with its title track, a funky, interesting hook song with a lot of inspiration. As stated in Gil’s MV review, “Doradora” has U-KISS step out of their electronic little box and experiment with new sounds, namely dub-step and a (particularly epic) guitar riff through the chorus. One wouldn’t expect U-KISS, a group formerly criticized for playing it too safe, to be the group to experiment with new sounds, but they did and experienced a pretty good payoff with this song. The dub-step was a pleasant and fitting addition, and the guitar-infused chorus is definitely the highlight of the song. It would stand out from all the material other boy groups are promoting right now, a huge achievement for U-KISS, especially after considering their history. 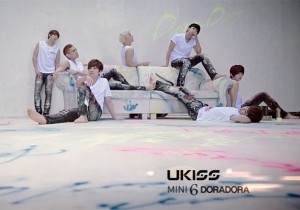 A little criticism is that the rap part (particularly Eli and AJ‘s joint rap) sounded a bit misplaced. U-KISS’ raps are usually handled pretty well, but this one felt a little contrived and forced. And also, that “I hate you!” Whoever had that part sounded a bit too shrill and almost whiny, and it’s unsettling in comparison with the rest of the song’s sensual feel. Basically, “Doradaora,” while not as attention-grabbing as previous hits “Tick-Tack” and “Neverland” serves its role as the promotional single and an opener to the entire album.

2. 4U
This track is composed by Jay Park, and his influence can be heard a bit throughout the song. There’s this dance, club-by feel of the song with a bit of Western influences, things very that are Jay. Jay Park usually brings about pretty commendable material, but this one fell a bit short and didn’t really meet up to expectations. While the back-and-forth rapping/singing was pleasant to the ear, the transitions weren’t the best and the song as a whole is just pretty forgettable. The light synths and the 90’s feel help it create a sweet sound, but that’s all it is: sweet with little substance.

3. When Love Stops
U-KISS is capable of handling ballads, as shown by previous single “0330.” The group definitely didn’t disappoint with this song. The piano intro was a very nice touch before the song picks up with its signature U-KISS synths. Every member is showcased well in this song, showing what U-KISS can actually do, and the emotion was delivered successfully. It’s just this song doesn’t really fit into the overall album, an album full of high-paced dance songs, and would instead make a pretty glorious OST track. I know that ballads are usually placed as ways to showcase members’ singing capabilities, but this song is better off alone.

4. Amazing
This playful electro-pop song was, surprisingly, a favorite. Composed by AJ, the song is ironically the most similar to U-KISS’ old material in terms of sound. However, this song is so quirky and fun, it manages to stand out and get attention. It’s fast paced and full of funny little background events, making it likely to be a fan-favorite, and the verses are exceptional. But while the verses in this song is particularly strong, the chorus is a bit weak in comparison, but that’s a flaw that can be overlooked. Overall, this song matches “Doradora” well and helps provide another strong track to round out the album.
5.Tick-Tock (Korean Version)
When an artist re-releases a song in a different language, comparisons are to be expected. Compared to the original Japanese version, this song is a bit lackluster. Originally a dark, haunting song about saying good-bye, it turned into a song about partying, such an overused topic in K-pop; and in that transition, the song lost a bit of its edge. Another criticism I have of this version is that this song adds more English to the already English-abundant original song — a common case in song translations. While U-KISS’ language skills are exceptional, all the English could get to be distracting. But “Tick-Tock” is still “Tick-Tack” and that means it’s still a horribly catchy song. The vocals and execution were done as well as the original, and while it’s basically Neverland 2.0, “Tick-Tock” is a strong track that’s pretty fitting for the album. If U-KISS has a second promotional single, this would definitely be it.
Overall, while Doradora didn’t show the improvements one would have expected, it showed enough to get rid of any doubt one would have had about U-KISS’ ability to move forward from their “Neverland” days. The album shows that U-KISS can successfully experiment with new sounds yet still keep its trademark attributes that make a U-KISS song, well, a U-KISS song. It’s been four years since U-KISS’ debut, and while they didn’t reach the level of growth or success that other groups that debuted at the same time achieved, if Doradora is any indication, it looks like U-KISS may eventually reach someplace near that level. Doradora is a solid work overall; It’s not at all perfect, but it’s evidence that U-KISS can move forward and keep on growing as artists, something crucial for an idol group aiming for longevity.

Ultimately, I give this album a solid 3.9/5. What do you think, Seoulmates? Did you like Doradora overall?

Recommended: “Amazing”
Worth a listen: “Doradora”, “Tick-Tock”, “When the Love Stops” (by itself)
Weakest Link: “4U”