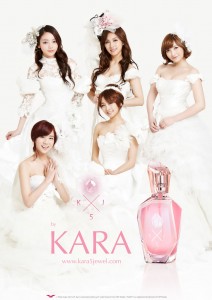 When it comes to the wide world of Korean advertisements, it isn’t difficult to find idols endorsing various cosmetics and cosmetic brands.  When I first visited Seoul back in 2009, walking down a street was an exercise in celebrity bombardment; look, Bae Yong-joon wants you to buy some lovely lotions from the Face Shop!  Oh, but Yoona thinks you should really buy your face wash from InnisFree.  Hmm, that tangerine-colored lipstick from Etude House looks spectacular on Sandara — but wait, is that a life-size JYJ cutout enticing me to enter Nature Republic for some organic foundation?  Sold.

But interestingly, while celebrities have been content to stamp their names and faces all over every cosmetic product imaginable, none have actually worked to engineer and market a cosmetic brand or product unique to them — until now, that is.  KARA has done what I was almost certain SNSD would do first and launched their own perfume, KARA 5 Jewel (K5J).  The fragrance, which is manufactured in the United Kingdom and currently being marketed by the Singapore-based company Three Cups Yard, is said to reflect the beauty and enthusiasm of the five members and to have fruity, floral, and woody undertones. 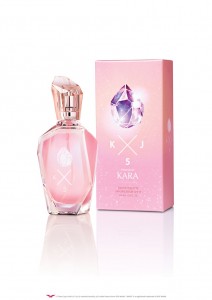 Why is this news-worthy, you ask?  It is true that celebrity-created perfumes are ubiquitous in the United States, to the point where it almost seems that marketing one’s own fragrance is something of a celebrity rite-of-passage — when I was younger, I could hardly watch an hour of television without some female celebrity trying to tell me how I should smell.  However, this trend hasn’t yet garnered much of a foothold in Asia; indeed, K5J is actually the first fragrance designed and marketed by an Asian celebrity (or in this case, celebrities), making it a trendsetter and potential precedent-maker.  Given their immense popularity in both Japan and South Korea, KARA is in a unique position to successfully market K5J across Asia.  I probably don’t even have to say that this first step will likely inspire imitation, especially because so many Korean idol groups are striving not only for domestic, but pan-Asian and even global popularity.  And of course, female fans will do just about anything if it means that we’re one step closer to looking or smelling like our favorite idols — or maybe that’s just me.

But seriously, think about it — marketing perfume is probably the most brilliant idea that anyone has had in K-pop in years.  Advertising for local or domestic brands is all well and good (and it is true that some of these brands are making their way across Asia and Southeast Asia), but let’s face it — everyone is doing it, and as much as it might improve your image to have your name (or your group’s name) affixed to a a popular name brand, having your own personalized cosmetic that can and likely will be marketed in multiple countries is a real feather in one’s cap.  Remember that this perfume is being manufactured and marketed outside of the auspices of a Korean company, which means that it will have greater mass appeal and can likely make its way into a variety of department stores worldwide that offer luxury goods.  Additionally, any female (or even male, for that matter) that has been to an airport knows that duty-free cosmetics are a girl’s best friend, and perfume is often one of the most popular and available items at the make-up stores that line the terminal.  And I probably don’t need to remind you how many airports there are in the world, or how often women and men patronize the duty-free shops in order to avoid paying outrageous taxes on expensive make-up and clothing. 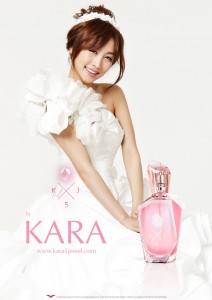 Moreover, any way you look at it, KARA’s attachment to the perfume is a boon for the group and for the Korean entertainment industry in general.  Quite obviously, the fact that the perfume is exclusively and uniquely a KARA product will make it appealing to both Korean and international fans of KARA, but the beauty of perfume is that people don’t necessarily have to be KARA fans to like and purchase it.  At the same time, people who purchase the perfume simply because they like it may become curious about KARA or encouraged to look up the group, which may have the effect of enlarging KARA’s fan base and introducing more individuals to K-pop.  Either way you look at it, it’s a win-win, and for that reason, I’m almost sure that K5J will immediately spawn a number of new celebrity perfumes from the K-pop world.  Is it too much to wish for every SNSD member to release their own individual fragrance?  But of course, I’m sure I don’t need to tell you all which one I would buy were that to actually occur (coughareyoulisteningSMcough).

KARA’s perfume will debut in stores across Japan on April 14, but will extend its market to Korea, Hong Kong, Singapore, Indonesia, and Taiwan over the course of the summer.  If the perfume does well, I can definitely see it entering markets in Europe and possibly even the United States.  International fans who might not have the opportunity to purchase it in stores can also preorder it at www.kara5jewel.com.

What do you say, Seoulmates?  Would you buy K5J?  What K-pop-inspired perfumes would you like to see?