The Best Womances in K-pop

I’m all about fairness and equal opportunity, so after I wrote my Bromances article, I realized it’d only be fair for me to dedicate an article to the best female friendships in K-pop. Actually, I’m lying. I didn’t really give much thought to a womances article until Ree was all like, “You need to write an article about womances! They’re just as important as bromances!” So I decided to sit down and do a little investigating into K-pop’s womances, which I really didn’t know much about because I’ve always been more of a follower of boy groups than girl groups.  After some research, below are my picks for the cutest K-pop womances. 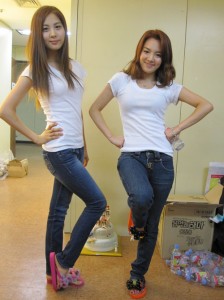 It may amuse our readers to know that it was either this friendship or Jessica and Tiffany’s. To decide, I asked Salima, Dana, and Gaya which would be better, because I only wanted one friendship from SNSD. Dana was like, “JeTi!” and Gaya was pulling for HyoSeo, but mine and Salima’s agreed dislike of Jessica let HyoSeo win in the end, much to poor Dana’s dismay. Someone give Dana a cookie. But enough about us, back to the womances. It may surprise some people to know that Hyoyeon and Seohyun have a good relationship especially because they’re so dissimilar. Uptight Seohyun is hardly anything like laid-back Hyoyeon. But the two share a room and it was once admitted that Seohyun is closest to Hyoyeon out of all the SNSD members. Hyoyeon and Seohyun have always been two of my favorite members so I’ve always enjoyed watching them interact. 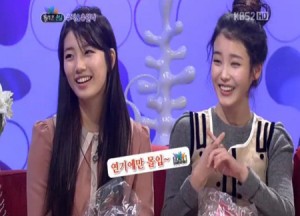 Maybe it’s because I’m biased and find whatever is associated with IU to be adorable, but miss A’s Suzy and IU’s friendship is cute. The two were on Dream High together and have since been seen together on shows and out-and-about. On KBS’s Win Win, they spoke of their friendship, along with another friend, actress  Yoo In-na. Also during the show, IU mentioned having tried to convince Suzy to come on a show with her for awhile, showing that they frequently keep in touch. And, of course, IU patted Suzy’s butt, which made headlines months ago and made me laugh. 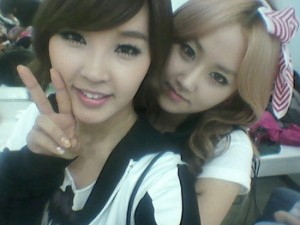 The friendship between 4minute’s Gayoon and Jiyoon is perhaps one of the strongest in K-pop. Most of us know that the whole “sisterhood” and “brotherhood” facade K-pop groups put up is just that–a facade. SHINee’s Key once broke the hearts of millions of Shawols by revealing that he sees his group mates as co-workers more than anything, and chances are other K-pop groups are no different. But there are true friendships in K-pop and Jiyoon and Gayoon are around to prove that. They have lots upon lots of sel-cas together and this little jewel. 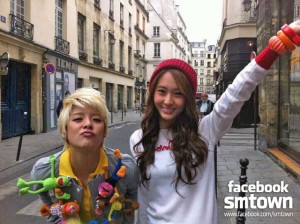 Those are my favorite womances in K-pop. What are yours?