Bromance goes hand-in-hand with K-pop, largely due to K-pop’s odd shipping culture and Asia’s penchant for skinship. It’s not uncommon to see friends in Asia show PDA, or public displays of affection, simply because that’s just how many Asian cultures are. South Korean culture is no different and this is reflected in the skinship, or displays of affection, between stars. Whether you’re a hardcore shipper that takes K-pop pairings very seriously, a casual shipper that does not, or someone who doesn’t believe in shipping or bromance at all, you can’t deny that several K-pop stars have adorable relationships. This isn’t to say that these stars are romantically involved — in all likelihood they’re not — but it’s still endearing to see them goof off, playfully flirt, or comfort each other. And because K-pop is so filled with bromance, I’ve decided to list my top five favorite K-pop bromances, in no specific order.

No bromance list in the world would ever be complete without Super Junior’s Eunhyuk and Donghae. These two may as well be the kings of fan service and skinship, seeing how much they love to titillate ELFs. However, Eunhyuk and Donghae’s friendship is more than simple show-boating, as they two really do care for each other, especially if this list is to be believed. The boys are direct and obvious with their affection, showing the incredible closeness of their friendship. Because of this, they’re my first bromance pick. 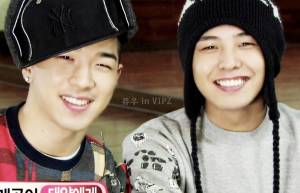 It isn’t easy to pick out a best bromance in a group like Big Bang. Despite it having been admitted that Big Bang weren’t always on the best of terms, they’re still comfortable enough with each other to publicly admit personal information that would make most men squirm. Popularity dictates that I should pick GTOP or G-Ri for Best Bromance, but I personally prefer the close friendship G-Dragon and Taeyang have shared since their trainee days. True, T.O.P and GD are also childhood friends, but I see Taeyang and G-Dragon as being a little more close. They’re very frank about their bond, Taeyang even saying:

As a friend it was a shame to see what happened to G-Dragon. However, no matter what, G-Dragon is a closer friend than family. Even if G-Dragon gets himself into a worse situation I won’t let go of his hand. I know that G-Dragon feels the same about me, our friendship will go on forever

Unfortunately, Big Bang isn’t the heaviest on fanservice, with the exception of Seungri, so I don’t have a sugary-sweet  video dedicated to this ship. But it’s alright — GD and Taeyang don’t need videos to prove that they’re best friends for life.

Next on my list is A+’s favorite couple, Joon and Mir. Joon and Mir made my list mostly because of how affectionate they are with each other, pretty much rivalling EunHae in skinship. They quite literally cannot keep their hands off each other. They’ve hugged, kissed, groped — you name it. Normally, it’s mischievous Mir inciting the fan service, for which I honestly cannot blame him. I’d have a really hard time keeping my hands off Joon, too.

Though not as famous or popular as the other pairings listed in this article, Woogyu holds a special place in every Inspirit’s heart. Woohyun and Sunggyu are the “It” couple of Infinite, outdoing Yadong (Dongwoo and Hoya) and Myungyeol (Myungsoo and Sungyeol) in popularity. Don’t misunderstand me — Yadong and Myungyeol have equally adorable bromances but because I only want to list one ship from each group, I’m picking Woogyu. Woogyu is the fluffiest ship in Infinite, partly due to Namgrease and his never-ending fan service. Their interactions are always cute to watch and it’s apparent that they’re the closest in Infinite, Sunggyu having once revealed that he trusts Woo-hyun more than anyone else on Sesame Player.

Now here comes the part where I break the hearts of all the Cassies that read this article and pull the heartstrings of every other K-pop fan. I’m choosing YunJae, being Yunho and Jaejoong from DBSK pre-breakup, because even though they’re no longer in the same group and probably haven’t spoken in a long time, they’re still one of K-pop’s best bromances ever. Their bromance became so popular that they even parodied it on Dangerous Love. There’s no denying that Yunho and Jaejoong were once extremely close. Watching their past interactions is bittersweet — sweet because of the lovableness of it and bitter because of the current reality. Sad but true, YunJae is no more,  but let’s always keep the faith regardless. Maybe one day, DBSK will be reunited again, and Yunho and Jaejoong will repair their bromance. Maybe.

These are my favorite bromances in K-pop. What are yours? Do you like these relationships or do you find them overrated?