I'm Lovin' Love Rain (For the Most Part) 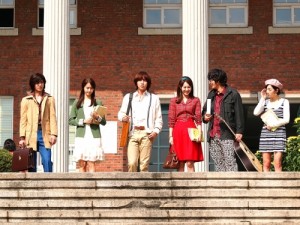 So far, my Spring Break this year has consisted mostly of too much sleep, a sinful amount of junk food, way too many shopping trips for prom, and… what else? K-drama marathoning. I started King 2 Hearts a few days ago because Gil recommended it and loved its dark, but wacky humor as well as Lee Seung-gi‘s convincing portrayal as a spoiled brat for the bajillionth time, so when a friend told me that I should add Love Rain, KBS‘s romantic drama with a soft, vintage feel starring SNSD‘s Yoona and Jang Geun-suk, to my Spring Break K-drama list, I balked. Firstly, I wasn’t a Jang Geun-suk fan, or a Yoona fan. Weren’t those the only two reasons why this drama was even getting attention? And come on, I’d pick Ha Ji-won‘s badassness as a North Korean officer over Yoona’s sweet and innocent portrayal of a college student in the 1970s any day. After a little coaxing, however, I figured that I had nothing to lose and pulled up the first episode. 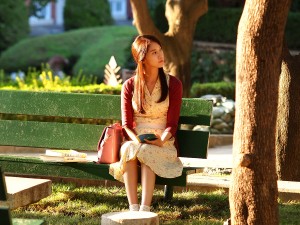 The first thing that pleasantly surprised me was how gorgeous the drama was. Because it picks up in the 1970s, the drama was filmed in a very vintage-y fashion, with soft, washed-out colors and old-fashioned costumes for the cast. The university campus our main characters, In-ha and Yoon-hee, attended had stone walls covered with ivy, beautiful red brick buildings complete with marble columns, and flowerbeds everywhere. The angles were shot very artistically and made the drama very easy on the eyes. I found myself focusing more on the background than the actual characters during some slow scenes (causing me to have to rewind multiple times to catch an important snippet of conversation). The costumes that the actors and actresses wore were very nicely assembled as well. Yoona’s simple beauty shone through her character (if only I could look like that while wearing Mary Janes and socks…) and even though I had problems with Jang Geun-suk’s hair during the first few episodes, I have to admit that he embodied his character masterfully as well. Love Rain really nailed it with aesthetics. 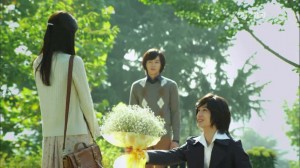 The basic gist of Love Rain is the pure and touching love between In-ha and Yoon-hee. In-ha sees Yoon-hee (within the first minute of the drama or so, actually) and immediately falls in love after just three seconds. Damn, can I be Yoona? In-ha spends the next few days unable to stop thinking about her and comes across her a few more times, even sketching her from his art studio. He’s not quite brave enough to go up to her and make a move, and his hesitation quickly backfires on him when his best friend, Dong-wook, notices Yoon-hee as well. He, however, has the guts to make a move on her and quickly forces In-ha into an awkward situation where he has to choose between trying to win the love of the girl of his dreams or keeping Dong-wook’s friendship. Being the good “bro” he is, In-ha chooses to ignore his feelings for Yoon-hee. But after all, this is a K-drama, and In-ha quickly finds out that it’s not so easy after all watching his bestie go after his girl. He’s just not brave enough to admit his feelings though, even when it becomes clear that Yoon-hee feels the same way. It’s a pretty cookie-cutter story that none of us K-drama fans haven’t seen before, but it is presented very prettily, which makes up for the lack of originality somewhat, in my opinion. 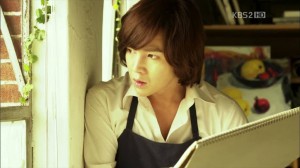 I’m not a Jang Geun-suk fan. You’re Beautiful was the second K-drama I watched and it’s not one of my favorites, even though I watched it to the end for Yong-hwa and Park Shin-hye‘s cuteness as a boy. I didn’t really understand Jang Geun-suk’s character very well in that drama and it may just be the fact that I had been a K-drama newbie while watching it, but I came into Love Rain very wary of him. I knew that he was a decent actor, but I just couldn’t warm up to him. Jang Geun Suk surprised me, however, with his convincing portrayal of the sensitive artist with a sweet side. Granted, I wanted to yell at his character a few times for being a coward about his love for Yoon-hee, but then I realized afterwards that the fact that I had felt frustration with In-ha meant that Jang Geun-suk was conveying his character properly to the audience and grudgingly admitted that although I will never be his fan, I didn’t dislike his performance in Love Rain. Really though, the hair has got to go. I looked up a few pictures of In-ha’s son (still JGS) after the time jump and his hair isn’t much better. K-dramatic sigh–I guess I’ll have to deal. 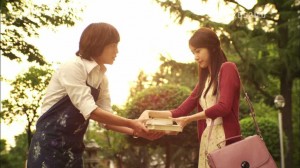 If I’m not a Jang Geun-suk fan, I’m even less of a Yoona fan. To me, she was always just the pretty face in SNSD who was the ideal girl of all my future husbands (I’m not bitter, I promise). I was even more wary about her acting skills than Jang Geun-suk’s because well… y’know, SNSD doesn’t have a great track record in terms of promising actresses. But a clever thing that the director of this drama did was to write Yoona into her character, Yoon-hee, so that she wouldn’t be required to take on challenging amounts of acting. Most of the time, she just stands around and looks gorgeous in her vintage clothes that would look like grandma clothing on me. But during the scenes when she is required to act, she doesn’t do too shabbily either. I mean, I’m not wincing in pain while watching her act, like I was during Dream High when Suzy came on, so that’s definitely promising. 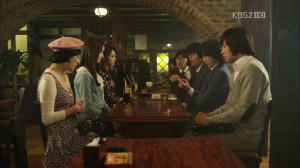 The supporting cast isn’t doing badly as well. I can’t stand it when the balance between the two main characters and the supporting cast is off in a drama, so I definitely appreciate that fact. The “other guy,” Dong-wook, is played by Kim Si-hoo. He’s a clueless cutie who grates on my nerves because he totally messed up In-ha/Yoon-hee, but he can’t be blamed because In-ha was such an idiot about not making a move when he should have. Dong-wook is a relatively one-dimensional character right now, but he’s doing his job in the plotline, so I have no complaints. He’s also going to be one of the characters who sticks around after the time jump, so I’m excited to see Dong-wook’s son in a few episodes. My favorite character, however, has to be Chang Mo, played by Seo In-guk. He’s adorably dorky and his loyalty as a friend totally makes me laugh. He’s definitely providing some comic relief for this otherwise serious melodrama. The girls, Hye-jung and In-sook, played by Son Eun-seo and Hwang Bo-ra respectively, are holding their own as well.

One of the best things about Love Rain is the music used in it. The producers seemed to have stuck mostly with simple, romantic melodies, very fitting for the 1970s portion of the drama, for the first few episodes. I’m not sure what music will be added to the soundtrack as the drama progresses, but I really like how the music isn’t overwhelming yet still noticeable in the background. It gives the drama a very comfortable feel overall. Here’s my personal favorite, “Love Rain” by Jang Geun-suk. It features soft acoustics and smooth vocals that made me melt on the inside.

Overall, I was pleasantly surprised by the watchability of Love Rain. It’s easy on the eyes, the acting is fairly solid, and the plot isn’t too convoluted. It’s predictable, granted, but the character development and writing isn’t terrible so I can probably stomach this drama without too much emotional or mental pain. I’m waiting impatiently for the time jump to take place, mostly to see if it’ll start sucking afterwards, but Love Rain looks promising so far!

Have you been following this drama? What are your thoughts?