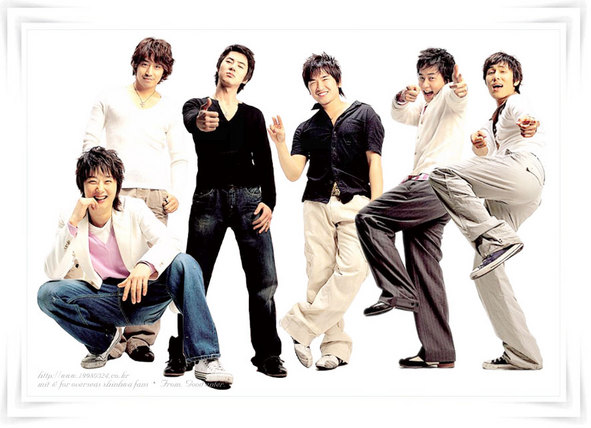 With no disrespect to Super Junior with the song “Superman,” but I think the “Last Man (or in this case men) Standing” title actually belongs to Shinhwa. I have a deep respect for Shinhwa for managing to stick together for 14 years. That is a hard task to do, and in fact Shinhwa is the longest running Korean idol boyband group to still be together. I’ve been following their activities since “Perfect Man” came out in 2002, and I’m glad to call myself a fan of their music. Recently they made a comeback with their latest album “The Return,” so I thought it would be great time to give a breakdown of who Shinhwa is, what they did, and why they are awesome.

Before I dive into their music, it is important to get to know the members first. Shinhwa is a six member group that consists of: Eric (the leader and main rapper), Lee Min-Woo (vocalist and main dancer), Kim Dong-wan (vocalist),  Shin Hye-sung (main vocalist), Jun Jin (rapper and vocalist), and Andy (the maknae and rapper).  Each of the members are distinct and are known for other things outside of Shinhwa. Min-Woo goes by the name M and has been releasing solo albums. Jun Jin and Andy are known for being in the variety shows X-Man, Banjun Dramas, and Love Letter (for all of the old K-pop fans, don’t pretend that you didn’t watch any of these shows!). They, as well as Dong-wan and Hye-sung, have also released solo albums. Eric has been going the actor route and has been in several dramas and movies with the most recent one being Spy Myung Wol.

Shinhwa originally debuted as a group under SM Entertainment up until 2003, when they switched to a fairly new company (at the time), Good Entertainment. Moving on from Good Entertainment, several members left to establish their own entertainment company (i.e. Min-Woo with M Rising Entertainment and Eric with Top Class Entertainment). In July of 2011,  the Shinhwa members became the first K-pop group to own their entertainment company. Even though the individual members had their own prospective  companies, this joint-venture company would deal with Shinhwa’s activities as a whole. As for music, they have released 10 studio albums including this most recent album along with numerous compilation albums, a Japanese single and album, and digital singles. 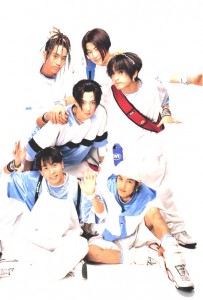 Shinhwa first came onto the K-pop scene on March 24, 1998 with their debut song “The Solver” off their album Resolver. To be honest, I don’t think a lot of people know of this song from Shinhwa. Quickly following “The Solver,” Shinhwa promoted with the more well-known “Eusha Eusha,” a remake of Manfred Mann’s “Doo Wa Diddy.” “Eusha Eusha” is a lightheared bubblegum pop song that contrasts with the seriousness of “The Solver.” The song follows the standard cute SM boyband formula: bright colors, cute poses, and plenty of bromance. The group’s third single “Chun Il Yoo Hon” was not as successful as the first two singles, but it is definitely worth listening to.

As a whole, this album was not a big success and Shinhwa could have potentially disbanded, but fortunately SM decided to give the group another try with a second album.

Shinhwa released their second album T.O.P (which stands for “Twinkling of Paradise”) on April 19, 1999. Their title track “T.O.P.” was edgier than their previous cute boy image. “T.O.P.” was/is successful to say the least, and you can still see the ripple of its success when idols cover this song (especially SM artists at award shows). As for the album, Shinhwa sold around 377,500 copies while peaking at #3 on the Korean monthly chart. “T.O.P.” also managed to stay in the charts for 24 weeks which was Shinhwa’s first big accomplishment as a group. The follow-up to “T.O.P.” was “YO!”  which follows another SM boyband formula which is to release an angry song to switch up the group’s image. You can see this formula with H.O.T.’S “Iyah,” DBSK’s “Tri-angle” and Super Junior’s “Don’t Don.”

Continuing the success of “T.O.P.,” Shinhwa released Only One on May 27, 2000.  The title track “Only One” sounds basically like the music that was popular at the time, but the music video was interesting and distinctive to say the least. The music video features the members dancing half naked in a dark warehouse. If I didn’t know any better this could have been mistaken for a potential soft-core adult movie, but then again they also released a photo album that had pictures like these: 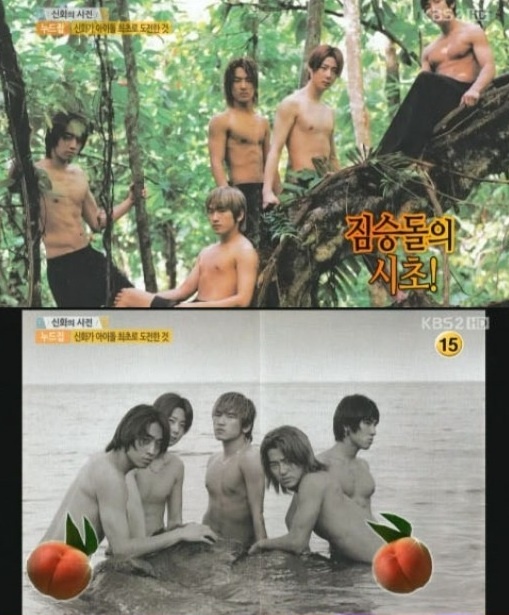 Shinhwa promoted two other songs off the album including “All Your Dreams” and “First Love.” Only One sold 433,823 copies and was Shinhwa’s first #1 album. The success of Only One allowed Shinhwa to win three awards that year: the SBS Gayo “Popularity Award,” the KMTV song “Bonsang Award,” and the “Popular Singers Award.”

Hey, Come On! was released June 8 2001 and  in total they sold 430,706 copies. The music videos for this album had a futuristic sci-fi theme. “Hey, Come On!” was their lead single, and “Wild Eyes” was their followup 2nd single. Because “Wild Eyes” uses chairs as dance props and it’s a generally famous song and another staple Shinhwa song that is still covered a lot to this day, alongside “T.O.P.”  This album was controversial because during this time, Andy was absent from the group because he had to take care of personal issues, and many were wondering about the real reason as to why he was not included in this album. Many suspected at the time that he left the group or was suffering major depression.

Fortunately, Andy came back for Shinhwa’s 5th album Perfect Man on March 29, 2002. “Perfect Man” is one of my favorite songs of all time from Shinhwa to this day. The energy and coolness of this song is astounding. In fact, I loved this song so much that it was one of the first songs that I tried to make a cover of in my awkward teenage years. Shinhwa had a second single “I Pray 4 U” which is another one of my favorites. “Perfect Man” is also Shinhwa’s second #1 album. In the same year, Shinhwa released their 6th studio album, Wedding, on December 6, 2002, and marked Shinhwa as the longest-running Korean boyband. The group promoted with “Wedding” and “Deep Sorrow” during this promotional period. An interesting thing to note is that Shinhwa has even performed “Wedding” in North Korea in the past. 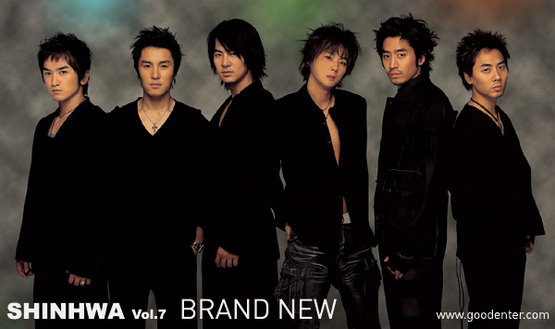 After Wedding, Shinhwa moved from SM to Good Entertainment. They released their first studio album (excluding their winter album) away from SM cleverly named Brand New on August 27, 2004.  Shinhwa promoted with 4 tracks including “Brand New,” “Angel,” “Crazy” and “Oh.” I personally own this album, and I can safely tell you that it was a worthwhile investment. In this album, the members are more involved behind the scenes with Eric and Min-woo writing some of the lyrics to the songs. This year was the year of Shinhwa as this album won numerous of other awards along with one of the most prestigious awards, the SBS and Seoul Music Award Daesangs.

Their 8th album State of the Art was released on May 6, 2006 (conveniently before the World Cup Madness). The boys promoted the album with “Once in a Lifetime” and “Throw My Fist.” “Once in a Lifetime” was definitely supposed to target the “fighting spirit” that Koreans get during the World Cup. Both singles hit number 1 on the Hottracks Sales Chart. Their 9th album was released on April 3 2008 with “One More Time” and “Run.” This album marked Shinhwa’s 10th year anniversary along with being the last album that they would make together before each member (with the exception of Hye-sung) would go into mandatory military service. Instead of going on music shows to promote, Shinhwa opted to have a mega-concert that could seat 22,000 people. Since this was the last concert for Shinhwa (at least for a while), all of the seats were filled. 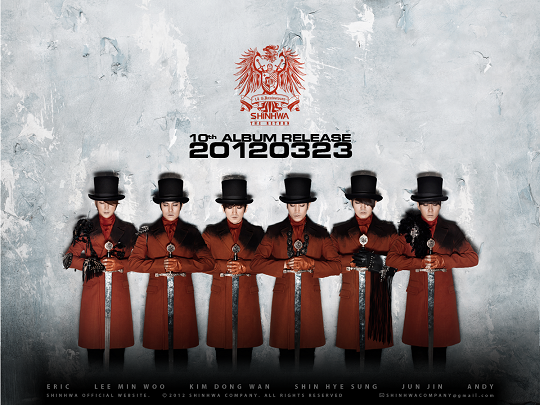 After 4 years of waiting, the members are back from the military and have released their latest album The Return. I only listened to some of their tracks so far, and I can safely say that I am glad that Shinhwa is back together. Lets hope they will continue to make awesome music for many more years to come. Shinhwa, welcome back to the world of K-pop.

Stay tuned to Seoulbeats for an upcoming album review!