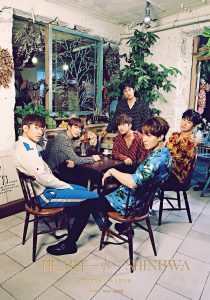 K-pop veterans Shinhwa are back with their latest mini-album, “Heart”, in celebration of their 20th anniversary. The longest-running K-pop boy band in existence, Shinhwa have continually defied expectations of disbandment, in an industry where five years is considered a long career. Refusing to let the times and newer generations leave them behind, “Heart” is a trendy and competent pop album consisting of 6 songs, including their title track “Kiss Me Like That”.

The album opens with the spacey and mellow future bass track “In The Air”, featuring esteemed female rapper Yoon Mirae. With sentimental piano chords, fluttering synths and echoing vocal chops, the song is a gentle yet upbeat introduction to the album. Yoon Mirae’s vocals are a great addition, though at times they overshadow the male vocals beneath. While nothing special, the song is pleasant and introduces the relaxed, melodic pop sound that comes to define the album as a whole. 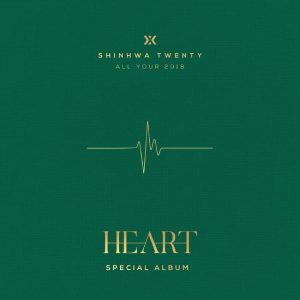 An interesting and welcome choice of title track, “Kiss Me Like That” is a minimalist pop song centered around an acoustic guitar riff, simple groove, and catchy melodic hook. The song makes the most of Shinhwa’s status as an idol group consisting of mature grown men, with lyrics that are a lot more sexual and direct than you’d expect from most idol groups:

When you touch me like that, touch you right back
All up in your body I’m a kiss you like that
From your lips to your neck, whips and cream
Melting vanilla ice cream
Girl what you wanna do, just tell me, we can go to bed
We can ride till the sunrise, ok we gon have a good time
Dreams turn into reality, it’s a dangerous adventure

Quiet but by no means lacking in energy, the song is impeccably arranged, allowing the vocals to take center stage and filling the remaining space without ever overcrowding. With mostly live instrumentation (the highlight of which is the brass), the song is refreshingly different from what most other pop title tracks sound like nowadays. The simplicity of line distribution also works in their favour – each singer or rapper has a whole verse to themselves, making each section more cohesive, the song simpler to follow and each member more memorable. All in all, it’s one of the better and more original songs on the album, and as such is a title track deserving of its place. 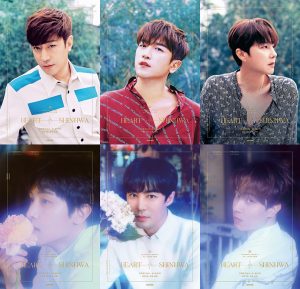 The album then brings us more of an upbeat disco vibe, with a song that would not sound out of place on a SHINee record. “LEVEL” is a mid-tempo disco-funk track showing off Shinhwa’s vocals, with jangling guitars, rumbling basslines, and retro synths. However, while perfectly competent, placed in the middle of the album the song is somewhat forgettable and is not quite catchy or groovy enough to make a strong impression.

Opening with an intriguing guitar intro is “HERE I COME,” creating a more mysterious and suspenseful atmosphere that has been shown so far. However, the song soon changes to a mid-tempo disco-funk song that is a little too similar to the previous song to make much of an impact. Still, “HERE I COME” has a little more dynamic variation, interspersing the choruses with quiet sections where the drums fade out and the introductory guitar riff comes back in. Overall, the song has potential but fails to really pull all of its elements together to make it the cohesive and powerful song it could be. 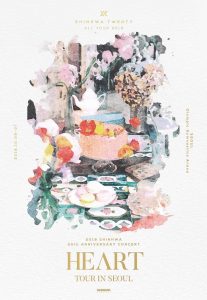 “L.U.V” marks another high point on the album. A melancholy pop ballad, the song particularly suits Shinhwa’s vocals and they perform it well, falsettos and all. A vocal chop breakdown keeps the song sounding modern, adding an interesting instrumental element to what might become a typical ballad otherwise. Relaxing and tastefully arranged, “L.U.V” contrasts with the previous two songs nicely and brings the album towards a gentler and more pensive close.

The final song, “Don’t Leave Me”, follows the melancholic vibe set out by “L.U.V” with a more traditional pop ballad, furnished with pianos and acoustic guitars. At least, it seems like that until the song bursts into a more contemporary, electronic sound, replacing pianos with synths and guitars with vocal chops. While it balances the two styles well, this song also feels forgettable; the ballad writing is quite typical, and the future bass style production begins to lose its novelty, having already been used several times on the album. Still, as the final song, it’s perfectly listenable and pleasant enough to round the album off well. 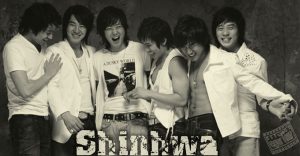 Overall, Shinhwa have returned with a surprisingly on-trend collection of songs. “Heart” could easily compete with younger K-pop groups’ releases, and in fact outshines many by opting for more mature and understated production that doesn’t bombard the listener with noise and unnecessary details.

That said, it’s questionable whether Shinhwa even need to be competing on the same level as these newer generations; as a group with 20 years’ worth of history and musical artistry, some of the songs on this album are almost too trendy. It would have been nice to hear a more unique sound that takes more musical risks, but “Heart” is still a perfectly competent K-pop album – one that may yet gain Shinhwa new fans, 20 years into their career.