Side B: Shinhwa's Early Years On Top 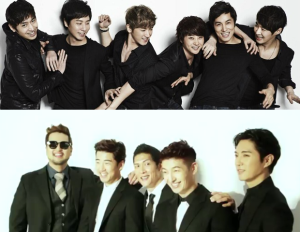 Twenty years is a long time. That’s true in general, but it gets longer when placed in the context of K-pop. We’re used to groups disbanding after five years. Ten years is an event rarer than hen’s teeth. Twenty is unthinkable — unless you’re Shinhwa. They’ve lasted longer– with a single line-up– than some of their contemporaries have been alive. As they’re releasing their twentieth anniversary special Heart this week, we at Seoulbeats are taking this opportunity to look back at their earlier works. And yes, we have done this before, but when a group enters its second decade, you need more than one chance to examine their discography.

Normally, when I do Side B’s, I take care to select tracks from a group’s entire body of work. Here, though, that’s not an option. They’ve been releasing music for literally longer than I can remember. While our previous excursion looked at Shinhwa’s first two albums and rise to stardom, I limited myself to their third and fourth, to peruse their music after they made it to the top.

Only One, Shinhwa’s third release, saw them continue in the darker vein that propelled them to stardom. “Jam #1” is a variation on that theme, mixing aggressive drum beats with some serious guitar shredding. It’s not dark but it feels dangerous, especially when combined with the arrogant vocals that Shinhwa serves. It’s bitingly sarcastic, a false reassurance as Shinhwa shows just how little they think of you.

Full confession– the first CDs I ever listened to were my sisters *NSYNC albums I stole. I feel that explains my instant love of “White Night”. It is a spectacularly lame turn-of-the-millennium power ballad that hits all the right notes. Overblown vocals as Shinhwa desperately pleads with you to stay with them? Check. Dramatic synth tones slowed way down to showcase the emotional sincerity? Yep. Mid-song saxophone breakdown to remove any ambiguity about what staying the night means? Oh, yeah. “White Night” is pure, unrelenting cheese, but it’s my cheese, and I’m here for it.

The release of Shinhwa’s fourth album, Hey, Come On!, saw their sound shift from the more rock-influenced sound of Only One to a sleeker, more synth-driven style. “Just 2 Be With U” showcases this shift perfectly, balancing the sweet love-struck lyrics against futuristic production. The vocals are the primary method of blunting the harsh tones; with creates an interesting dynamic. On the one hand, you have gentle-sounding men promising you the world, but on the other, the brutal production provides an edge of fear about what they’ll do for you or even to you.

“Reminiscence” is a track best described as deceptively pretty. The backbone of the song is a very lovely violin track, intrinsically poignant and providing a solid foundation for the delicate production. Everything else– the snare, the synths, and especially the vocals– are soft and melodious, crafting an aura that is gently bittersweet. The lyrics, on the other hand, are obsessive, as Shinhwa tries and fails to cope with a break-up, something that only worsens as their ex does so without issue.

“Never Can Rewind”, on the other hand, lays the lingering resentments after a failed relationship bare. The productions is extremely early 2000s, from the drum lines to the dramatic, almost punticated deliver of “you never can rewind”, but it works as Shinhwa tries to banish the lingering thoughts and memories of an ex from their minds, complete with a warning that she is not getting them back anytime soon. It’s the kind of high-key drama that is tricky to pull off, but it magnificent when it’s done well.

These are only a handful of Shinhwa’s excellent b-sides, as one might imagine from a group with as much longevity as them. Any deep cuts that you adore? Leave them in the comments.