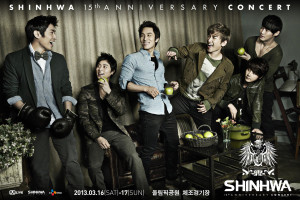 Longevity is an elusive formula for the K-pop idol, with many groups struggling to stay afloat in an overpopulated industry. And while some groups have beaten the “five-year curse” and many more appear geared to do the same; but in the grand scheme of things, there are many who regard just getting through five years as a tremendous accomplishment.

And then there’s Shinhwa.

When this article is published, it will be the 24th of March, 2013, in Seoul; exactly fifteen (fifteen!) years to the day the sextet debuted under SM Entertainment with “The Solver.” Ten albums, three entertainment agencies and four years of military duty-induced hiatus later, Shinhwa stands as the longest active  group in K-pop; and the “legends” plan to continue their reign, with both the release of an eleventh studio album and return of a new-look Shinhwa Broadcast planned for April.

But while Eric, Min-woo, Jun Jin, Andy, Dong-wan and Hye-sung are looking to the future, I’d like to focus instead on their beginnings for this Side B, with their first two albums: Resolver and T.O.P. 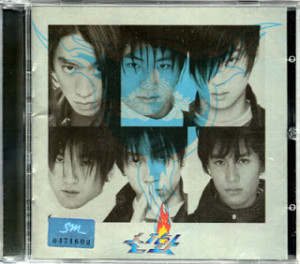 “The Solver” wasn’t the only title track for Shinhwa’s début album. Resolver also had R&B hybrid “Sharing Forever” and aegyo classic “Eusha Eusha!” Resolver provided a varied sound, but the following three tracks off the album, which are equally upbeat, are what caught my attention. “I Grew Up In Height” sounds like a cute song thanks to its twinkling instrumental and sweetly benign-sounding chorus replete with falsetto. but its English rap (which, thanks to a lack of translations, is the only part of the song I understand) tells a different story:

The rap-heavy track “Emergency Exit” is most memorable for its instrumental, which features electric bass guitars, vocal samples and bouncing synths create a funky retro sound, with the rousing chorus creating a palatable contrast. The song drags a bit more than it should have towards the end, but overall it’s a fun listen (though I still have little idea about what they’re singing).

The last song on Resolver, “Silkworm” is also my favourite track. The the sinister synths that make up the instrumental places the feel of “Silkworm” within the same realm as that of “The Solver,” but “Silkworm” comes across as more contemplative than the aggressive title track, the softer instrumental and female backing vocals contributing to this contrast — even the guitar solo fits in seamlessly and utilised in a non-obnoxious way. “Silkworm” is easily one of the best songs on the album, if not the best.

The title track for second album T.O.P was a tremendous success for the group, and is most likely the most-performed song by SM artists after H.O.T.’s “Hope.” But while the album didn’t reach the same heights of success as its title track; but if I had to play favourites, T.O.P would be my favoured album of the two featured in this Side B. It must be mentioned that “Grief,” “Breakin’ The Silence” and “My G.” were very close to making the below list, but in the end I chose the following songs to feature:

“Cycle” involves one of SM’s first forays into the world of screamo, though it is, thankfully, tempered here; yes, it’s tame compared to real heavy metal, but this watered-down version works best for the SMP style seen here. In any case, it suited the song in conveying the message that society is a never-ending cycle wherein what goes around comes around (yay for subtitles!)

“Nothing” is a romantic tune that leisurely meanders through the layered instrumental; though the rap break itself feels out-of-place, it is transitioned into seamlessly, and the bridge immediately following it was just perfect.

Even as someone who has only listened to one Shinhwa album in her life, the group’s style was easily identifiable to me in these first two albums. Having an established sound so early on, and being able to carry it through ten albums of different sounds, music trends and general growth and improvement would give some insight into how Shinhwa has been able to stay active for so long and still release music.

I hope you enjoyed this blast from the past — I, for one, am definitely looking forward to the group’s 11th album next month after completing this Side B; how about you? And what are some of your favourite Shinhwa B-sides? Share your thoughts and more in the comments below!