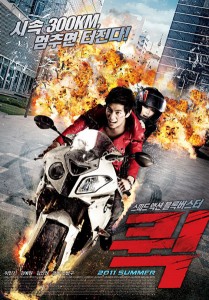 Take a motorcycle gang, terrorist bombings, and the Korean AND Japanese mob. Then add in a girl-group member, a carrier, and a stocker. And don’t forget some bantering cops, bad CGI action scenes, and an old flame that may or may not be an OTP. Remember to add Lee Min-ki’s face, and that’s director Jo Beom-Gu’s Quick (2011).

Now you may be thinking that this mixing of genres can’t work no matter how (arguably) pretty Min-ki’s face is. Thankfully, it can. Quick brings more than enough action to justify its promotional poster, while piling on a decent amount of humour and romance. It’s a very well-rounded, yet simple, yet fresh film. I’m so happy Min-ki picked up the lead role, because I need eye-candy to get interested in a plot.

So Lee Min-ki stopped acting in dramas (excluding his cameo in Shut Up Flower Boy Rock Band ) since 2007. Sadly this was just about the time I feel in love with gems like Dalja’s Spring and the less sparkly Love Truly. It wasn’t until mid-2010 that I realised one of my top 20-something bias (this is before Sungkyunkwan Scandal and its cast came along) hadn’t gone off to the army (and/or died).  Instead, Lee-Min-ki has had a slew of hit films from Romance Island to A Million to Haeundae. Though I would go crazy over him having a new drama, I’m happy to say I’ve enjoyed every Min-ki movie I’ve watched (so like 4-ish…).

What Quick lacks is the seriousness and über-sexiness (a.k.a sex scenes) that Hollywood has taught me to expect of action movies.  Instead of Bin Laden, Special Forces, and Bond girls, the film gives us a random compilation of the various stereotypical Korean bad guys, cops who seem totally unwilling and undertrained to do their job, and a shower scene that ends with suicide (don’t worry, that wasn’t a really big spoiler).  All of which make a great comedy, yet Quick is supposed to be an action film.

So I brought my standards down to the budget of the Korean film industry, and Quick transforms into an amazing film with tons of tricks and flips to keep boys and girls happy. It has the beautiful love interest/sidekick (Kang Hye-won), a psychopath mad-genius, and a hero with a cool ride. There are lots of explosions, romantic flashbacks, and quirky characters packed into a 115 minute long joyride.

For Your Viewing Pleasure: Profile Pictures

Finding the Extraordinary in a “Very Ordinary Couple”