Will Tasha and Tiger JK Get Lost In the Mix?

Tasha (T, or Yoon Mi Rae) has always been a continual source of fascination for me – her background as a multiracial youth and the difficulties she faced are well known – but she has never turned away from talking about or referencing it in her music (‘Black Happiness’).

Tiger JK similarly drew on his own experiences with racism and discrimination during his time in the U.S.  during the 1992 L.A. Riots as inspiration for his music, drawing on important social issues and diverse musical styles to change the hip-hop scene as Korea knew it.

It’s been four years since T’s last album and it’s great to see these two inspiring artists putting in so much passion and world-consciousness into T’s upcoming album.  According to reports, these two even worked in the studio during Chosuk, demonstrating their dedication to their music. 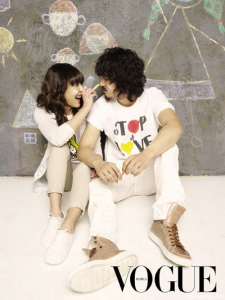 My only concern is that, despite their unopposed labels as “Legends”, they don’t have million-member fan groups and endless calendars, posters and stickers of themselves, like the rest of the idol groups scheduled to return this fall.  I sincerely hope they delay their comeback by a few months. It would kill me to see them to belost under the glut of hot pants and dyed hair as a stampede of girl groups take the stage.  I suppose their songs and albums will do well even without the super-commercial marketing push but there is a part of me that believes they merit just as much attention as groups like Super Junior have earned and perhaps are more deserving of it.

The breadth and scope of their music is socially conscious, carefully crafted and created with a greater purpose in mind- bringing people together as being one. While everyone is screaming over G-Dragon’s new haircut, I’ll be sitting patiently with my homemade “T & Tiger JK” sign in hand.  Do think the couple is worthy of my boot-licking manifesto? Do they deserve to come back with all the hype of a typical k-pop act or does that undermine them as artists? What do you think of their reputation as the “King and Queen of Hip-hop?”