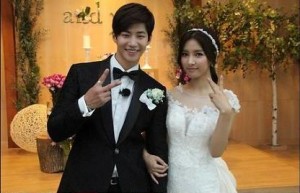 The last week in K-pop included virtual weddings with love that lasts more than 24 hours, the MAMAs in Hong Kong, MacNut Gate, Luhan back on the radar, comebacks and debuts and anticipation for all the end of year festivities.

The following are my picks for the top 5 Things that happened in K-pop for the week of 12/1 through 12/7.  If you are not up-to-date with your K-pop and don’t like spoilers, turn back now.

It was a sleepless night for those of us not quite in the right time zone to watch the MAMAs live last week.  And while the awards were predictible, the performances were worth the panda eyes the next morning. My favorite of the night was the ‘Fight of the Century’ pitting Block B against BTS.

Tomorrow’s Cantabile, aka Naeil’s Cantabile, which starred  Joo Won and Shim Eun-kyung had it’s final curtain call last week.  The drama was a bit off tempo in the beginning, but eventually found its rhythm. It didn’t do great in the ratings, maybe many thought you had to be really into classical music to enjoy the drama, but that wasn’t the case at all. I, for one, will miss its crazy love story and have already missed its presence this week.

Infinite Challenge has been successful so long because it understands  its audience and the issues that are important to them.  So along with the laughs, every now and then the show tackles real life issues–like the hardships of those with extreme jobs.  The cast tried various extreme part-time jobs like window washing on the 63 building, shucking 10 kg of oysters, loading and unloading boxes at a delivery company, telemarketing, and mining. The cast experienced the hardships that people in these hard jobs do in order to survive and to provide a service to others. It’s a great reminder that we should appreciate the jobs we have, and to appreciate and respect those that work in extreme jobs for the service they provide us.

Yoon Mirae,  Tiger JK, and Bizzy released their latest collaboration “Angel” on December 7th.  The song speaks of the trials the three experienced in 2014 that lead to the formation of their new label and how things like family, love, friends can be an angel in your life to pull you through the darkness. It’s a beautiful song.

I seriously have never appreciated my job more than I do now after watching the struggles of the rookies in Misaeng.  This concept of appreciating the job you have was even more so apparent as a former colleague visited with Director Oh and told him that although life within the company is a battlefield, life outside of it is hell.

This scene of the episode shows Geu-rae getting sent out on the 100,000 won mission: to buy and sell a product trying to make the most money possible out of the initial 100,000 won investment. Geu-rae gets sucked into the misconception that buying anything cheap will be easy to sell for a profit and almost fails his mission until he finds the perfect market for his product.  Baek-ki gets sent along by Assistant Manager Kang to learn that in spite of his ‘specs,’ there is still  a lot for him to learn, even from the likes of Jang Geu-rae.

Those were the top 5 Things I LOVED in K-pop. What were yours?