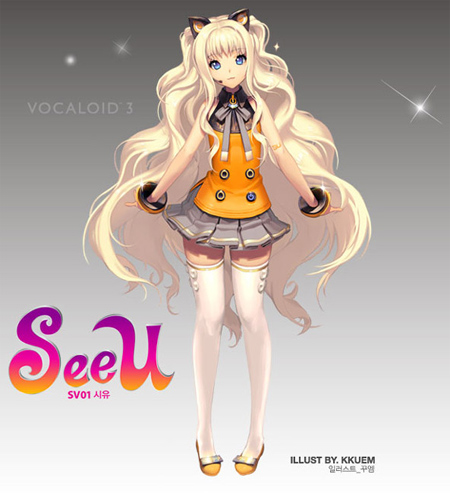 As recently announced, Big Hit Entertainment is going to take the leap of faith with their exposition of Vocaloid SeeU. Her debut song will be “I=Fantasy”, a rather fitting title for a pseudo singer. BHE recently released a demo of the song, and so far, there’s been a promising response.

Within the past decade, there has been an increase in the use of digitalized music. As time has shown us, synthesizers and autotune have brought us both good and bad, but it is without doubt that they have found niches in the pop music industry of today. Perhaps the most shocking aspect of digital music comes with the recent appearances of Vocaloids. For those of us who don’t know, Vocaloid is a music synthesizer program used in Japan to craft digital popstars—computer created holograms—to accompany their high pitched and fast paced music. These synthetic superstars have fantasized proportions and abnormally colored eyes and hair; in truth, they are another manifestation of anime characters, just set to music and choreography.

I guess what concerns me the most are not the vocaloids themselves, but the fact that they are designed to be appealing and functional. A vocaloid has a tiny waist, long legs, and big eyes: a package deal that doesn’t need any maintenance. You don’t need to feed a vocaloid, they require no sleep, they can work endlessly without ever needing an IV and they can’t sue for slave contracts or sexual harassment.

I don’t think that Vocaloids could ever fully replace the appeal of human idols and, to some degree, I think they are just an exercise of the capability of advancing technology (though in my opinion, those capabilities would be better used for real world problems) but it also makes me ask “why?” In all honestly, I don’t see another reason as to why you need a vocaloid other than profit (and besides the fact that people make them because they can).

To think that this idea may be catching on, especially in one of the largest music industries in the world, actually kind of scares me. Idols these days already work themselves into their graves (some by their own hands) to achieve popularity, but to think that perhaps, one day in the future, they will have to compete with computerized idols that have no human vulnerabilities—I mean really, what will become of the Asian music industry? Instead of encouraging the ingenuity and integrity of human people, will be companies simply be assigning a flawless face to their techno autotune? Will we one day have to say ‘human idol’ or ‘digital idol’ in conversation with our friends because we may just not know who is who?