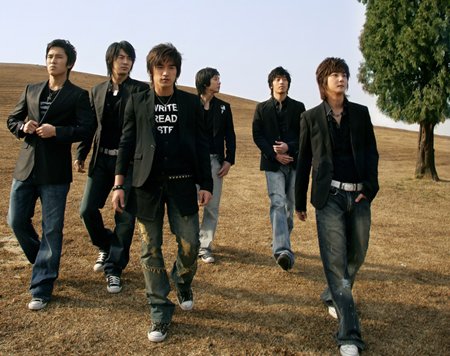 Is Shinhwa the example of the boy band that could?  Kpop’s longest lasting Kpop boy band announced their comeback in March 2012 and the formation of their own entertainment company, Shinhwa Company.

Shinhwa was SM Entertainment‘s premiere boy band after experimenting with their formula with H.O.T..  The band made up of members Eric Mun, Lee Min-woo, Kim Dong-wan, Shin Hye-sung, Jun Jin, and Andy Lee debuted on March 24, 1998.  Shinhwa was able to work their way to the top of the charts  in the early 2000s and were well on their way to Kpop domination when the all-to-fatal 5 year mark struck in 2003.  The group stuck together although they did leave SME, and signed with Good Entertainment with which they stayed with for several years.  During this time the member pursued solo careers in music, acting, and producing as well as continuing with their group activities.  Their last group effort occurred in 2008 to celebrate their 10th anniversary and 9th album and would be the last time fans would see the group together for years as 2008 marked the beginning of the members entering into the military to perform their two years of service (except for Hye-sung who was exempt due to a bad knee).

Shinhwa’s comeback in March 2012, which coincides with Min-woo’s release from the military, will mark the group’s 14th year together.  To celebrate, they are planning to release their 10th album, will be actively promoting the album on the various show, and are planning a concert tour of Asia.  What is it about Shinhwa that has let them stay together all this time where most groups last only one-third of the time?  There are no doubt several factors including their group dynamic, timing, the breaks they were able to take to pursue their various individual activities, and their relationships with each other.

They are like most other boy bands- a group of good looking and talented guys that got put together by their company, but in between the hard work Shinhwa was known to play hard also.  Due to the fact that they were amongst the forerunners of the boy band movement in Kpop, I’m sure the boys of Shinhwa led their company and managers a merry chase resulting in the implementation of much of the rules and contract implementations that present idols must live by today.  Kim Dong-wan had once said in an interview that back in the day they were able to get away with a lot of things because there weren’t things like camera phones, etc. where people could have easily have gotten proof of their, umm… ‘play?’  Which made their idol life back then a little less stressful than that of our current idols.  When looking at their history the most notable occurrence is that no matter what happened they always would come back together to regroup after being on hiatus or completing their solo efforts.  I think having those times when they are able to pursue other things away from the group really helped them stay together by giving everyone some breathing room.  Whether this ability stems from their close relationship or business savvy in knowing that by their always being ‘together even though seperate’ they placate their fans, only Shinhwa knows.

Their ability to stay together through 14 years is something to admire, as I am sure there have been disagreements and fights, but they have been able to overcome those obstacles.  Being able to work, play, and grow as artists together while controlling their own destiny must be a dream of all artists, and being able to do it with your friends by your side makes it so much sweeter.  Currently SS501 seems to be following the Shinhwa formula (in a way) and we’ll see if they are able to keep up as a group of individual artists.   As a fan of Kpop, I hope that more groups will be able to do the same, my fingers will forever be crossed for Big Bang.