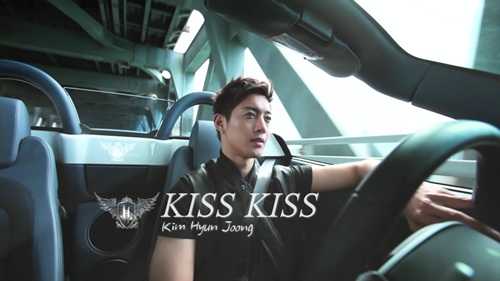 After announcing the end to his promotional activities for “Break Down,” it was reported that Kim Hyun-joong would next be promoting the song “Kiss Kiss” and I couldn’t have been happier.  Although I know that the more mature and manly image he was portraying with “Break Down” was the image he wanted to move forward in his career with, I just didn’t think that “Break Down” was a solid debut single.  The upbeat and sweet “Kiss Kiss” is a much better song in my opinion and my favorite off of his solo album.

He released the MV for the song on the 13th to kick off its promotions.  The MV is a montage of scenes from Hyun-joong’s last fan meeting, behind-the-scenes footage, private videos, and Hyun-joong driving in a white Lamborghini (I think, what is it with boys and their cars?).  It’s said that the MV is a compilation of some of Hyun-joong’s happiest moments recently with the success of his solo album and the great support of his fans and that this MV was a way of preserving those memories.  Check out the MV.

The MV is cute and full of great scenes of Hyun-joong. I will say again that he looks the healthiest and happiest he’s been since before the phenomenom that was Boys Over Flowers. I’m thinking the move to KeyEast was a good one for him.  While I am glad that we do get an MV for “Kiss Kiss,” I am disappointed in the MV for not being something more original.  In my head when listening to the song, I thought a semi animated MV would have matched the song perfectly- something along the lines of G-Dragon‘s “Butterfly” MV in looks, but with a different story line of course.  That would have cost a lot of money though and the fact that “Kiss Kiss” is only a follow up promotion and not the title track of his album in most cases wouldn’t warrant an expensive MV.

Kim Hyun-joong’s promotions for “Kiss Kiss” will continue with his debut performance of the song on Mnet’s M! Countdown on the 14th.