Jonghyun and Shin Se-kyung are dunzo 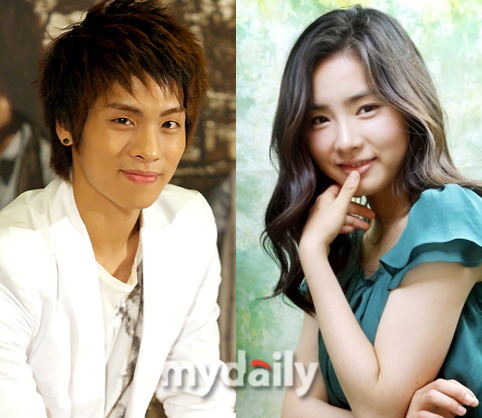 K-pop’s resident pair of star-crossed lovers recently announced that they are no longer seeing each other and have decided to stay ‘just friends.’ Jonghyun and Shin Se-kyung’s respective agencies explained that the two have been too busy with their respective activities to see each other as often as they would have liked – ergo, breakup. Personally, I find it a tad bit creepy when entertainment agencies report on behalf of a couple’s romantic status – but then again, it’s not as if Jonghyun himself is gonna jump on stage and announce that he’s single and ready to mingle, right?

The Shin Se-kyung and Jonghyun relationship was definitely a landmark in the K-pop idol world, as Shin Se-kyung and Jonghyun are two of the youngest Korean celebs to ever reveal their romantic relationship – and at the heights of their careers, no less. But regardless, did anyone actually believe that these two were going to last forever? Most normal young adult relationships don’t last more than a year or two, anyway, so who’s to believe that two high-profile celebrities with stressful careers would last any longer?

I think this the primary reason why entertainment companies don’t allow idols to reveal their romantic lives to the public. Of course, the fear of jealous fangirls is part of it, but why get a crowd worked up over something that might not last? When news broke of Jonghyun and Shin Se-kyung’s relationships, all hell broke loose – fan cafes were shut down, hate messages flew back and forth across the internet, fangirls across the world were screaming and crying into their pillows. Most importantly, Shin Se-kyung gained a ton of anti-fans, and Jonghyun probably lost a good chunk of his own fans. All that for a relationship that, ultimately, didn’t last for more than nine months.

Of course, it’s also wrong of the fans to go nuts over the fact that their favorite oppa is now dating. A good number of fans have this mentality about their idols that says, “If I can’t have him, no one can.” This statement (and derivations of it) is the reason why K-pop fandom can be so possessive and harmful, and it needs to be changed – for the sake of both the fans and the idols in question. But you don’t do it by revealing every idol relationship to the public and run the risk of innumerable losses and the risk of turning these romantic relationships into topics for public scrutiny and criticism, a la American tabloid culture.

Rather, let’s start with laying off the interview questions about ‘ideal types’ and ‘first kisses.’ Let’s quit it with the video messages to future wives. These things have practically defined idol culture for far too long, and if we want a K-pop world where celebs can date openly without the fear of fan backlash, then the fan-hormone fodder should be given the chop. Otherwise, there will never be a happy ending for any idol romance.

So best of luck to these two – and to the fangirls shouting hallelujah to the high heavens and changing their Facebook names back to “Mrs. Kim Jonghyun”…Think about your life. Think about your choices.