The members of SS501 left DSP Entertainment last year following the expiration of their contracts, and only recently have some of the members returned to the K-pop scene through individual activities. Park Jung-min released his solo mini-album, Not Alone in January. Now, it’s maknae Kim Hyung-jun‘s turn. His first solo mini-album, Girl, was released on March 9th.

I usually split my album reviews into four parts, each part focusing on a different aspect of an album’s promotional effort: styling, music video, live performances, and music. However, I was really tempted to lump everything all into one spiel because the overarching theme in Girl is fairly simple and nondescript. And boring. 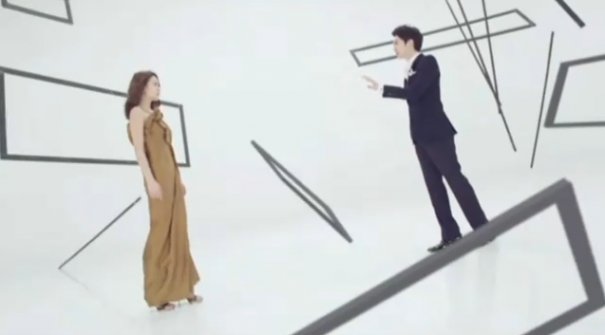 Clean. But not necessarily the good kind of clean.

Initially, I had a ton of good things to say about this album, because it was everything I liked: clean lines, crisp-sounding music, handsome men in handsome clothing. But there was just something about it that just didn’t sit right with me.

I’ve said before that an artist’s music video oftentimes serves as a good representation for the entire album project. Most decently-made music videos capture the essences of everything that goes into a promotional effort: the music, the styling, the choreography, the performance mood, et cetera. The video for “Girl” was pretty minimalist as far as K-pop videos go – which, in this day and age, is oftentimes a good thing. Brightly lit sets and clean lines are especially befitting for electronic, mid-tempo dance tracks like “Girl.” Everyone was appropriately dressed (excluding Hyung-jun’s kilt…seriously, wtf), the videography was acceptable, and the choreography was pretty good. So what went wrong?

The idea behind the concept certainly looked like it was supposed to be “clean,” but for whatever reason, the end product looked a bit sloppy and cheap. Which is a shame, but let’s face it: S Plus Entertainment – Hyung-jun’s current label – is no DSP Entertainment. The budget was probably lower, the staff less talented, the resources less bountiful – and in the end, you’ve got an inferior product. Doesn’t matter that the artist you signed was a member of one of the biggest boybands in Korea. It’s just how it works.

But what’s weird about “Girl” is that it promotes an image that is usually associated with all things shiny, clean, and expensive. It usually takes quite a bit of money to pull off a minimalist futuristic look – just look at Seungri’s “What Can I Do” MV. Most smaller companies usually just settle for what their budget can handle – which oftentimes means tacky sets, ugly costumes, awful songs….but what can you do. It’s really, really difficult to try to pull off an expensive look with very little money. It’s like trying building a sports car with tin foil. So it kinda kills me to see Kim Hyung-jun coming out with a product that is essentially an expensive MV wannabe, but I can sort of understand why S Plus decided to go with this concept despite not having the moneiz to pull it off.

In my review for DBSK’s Why? (Keep Your Head Down) album, I talked a lot about marking a divide between sunbae artists and hoobae artists. There needs to be a clear distinction in quality between the artists that have already made it in the K-pop industry and the artists that are still fighting their way to the top. For example, BoA shouldn’t promote and compete with material that’s of SHINee caliber because she’s been around for a decade longer than SHINee, and she deserves material that’s a decade better.

But you can’t just magically produce “better” material for a sunbae artist whenever you want to. That’s when image marketing comes in. Returning to my previous example, BoA showed up to promote “Hurricane Venus” in some of the fugliest outfits I’ve ever seen. But aside from being horrifyingly unflattering, those outfits also made BoA look like she could’ve fit in with any other rookie girl group that was promoting at the same time as her. For “Hurricane Venus,” BoA simultaneously promoted an image that did not support her status as a sunbae artist. And when you’re a ~K-pop Legend~ that has been out of the scene for a few years, sometimes the only thing that can get you back in the running is solely by promoting your status as a ~K-pop legend~. And what does that entail?

SM didn’t seem to get this whole idea when they designed BoA and DBSK’s comebacks, but for some reason, S Plus Entertainment did. The basic ideas behind Hyung-jun’s material are very grown-up and clean, and to some extent, I think S Plus Entertainment really did succeed in conveying the fact that Hyung-jun is kind of a big deal and that he’s too good to compete with all these other sorry noobs so he’s just gonna sing his song and be cool about it, ’cause that’s what grown-ups do. I watched Hyung-jun perform “oH! aH!” for the first time during last week’s Music Bank, and the performance seemed to exude classiness. Or it was trying to, at least.

The same goes for the music – which was surprisingly good. I didn’t follow SS501 all that closely while they were still active, and I don’t know Kim Hyung-jun’s strengths and weaknesses all that well. But I was pretty impressed, judging from what I heard on this mini album alone. Like the music video and the live performances, the music exudes a more mature feel and a very open, clean sound. Unlike the MV, though, the music wasn’t cheap-sounding at all – not unless you went and listened to the album on repeat for, like, four hours and attempted to pick apart every musical inconsistency and mixing error in the tracks. And who in their right mind would subject themselves to that? 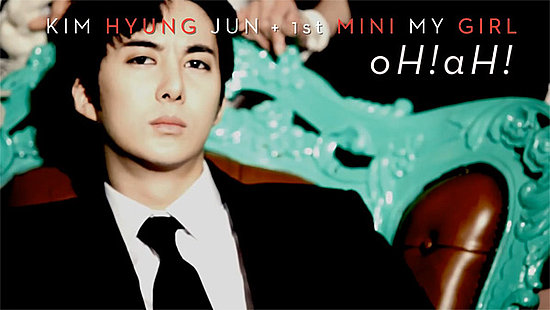 I often find album intros to be boring and pointless, and it’s not as if “Angel” was really anything special for its 46 second-long worth. But what really impressed me was that it segues really smoothly into “oH! aH!’ And what impressed me even more was that E-Tribe didn’t compose “oH! aH!” In fact, E-Tribe didn’t contribute anything else to this album apart from the intro – and yet, the intro is able to express the mood of the album perfectly while seamlessly leading the listener into the punchiness of “oH! aH!” I’ve never really liked E-Tribe’s songs, but definite props for their work here.

Can we please kill the stylization for this title?

“Girl” seems to be the song of choice for most listeners, but “oH! aH!” is my personal favorite track off the album. It’s probably mostly a personal taste thing, but I just love how clean and light “oH! aH!” sounds while also maintaining a crisp, dance-friendly beat. More importantly, this song instantly tipped me off to Hyung-jun’s whole “I’m-the-sunbae-around-here-and-I’m-too-cool-for-you” vibe. And that is a very, very good thing.

Kinda glad he’s promoting “oH! aH!” instead of this song, because there’s a lot about “Girl” that wanders into dangerous K-pop cliche territory. It’s not a bad song at all – I personally like it a lot – but it doesn’t convey that same clean, grown-up feel that “oH! aH!” conveyed so well. “oH! aH!” serves as such a great vehicle for the whole “sunbae agenda,” and I don’t think “Girl” would’ve been nearly as effective.

Not quite as jarring as the other two tracks, but it’s a pretty decent medium tempo song that’s just a little too heavy on the synthesized sounds. I’m also not a huge fan of DOK2’s performance here – his parts weren’t well integrated into the rest of the song and it seemed a little too reminiscent of the American pop trend where they’ll just stick a random, ill-fitting rap break into a perfectly okay song just for the sake of having a guest rapper. (Um, Drake in Rihanna’s “What’s My Name,” anyone? Severe DNW.)

Like I said before, I didn’t really pay much attention to SS501 while they were still active, and I wasn’t too familiar with Kim Hyung-jun’s voice until I listened to this album. And I’ll be honest: I’m not the biggest fan of his voice. To be honest, this probably shouldn’t be anything new to me – I’m a big fan of Kibum (formerly ;_;) of U-Kiss, and seeing as he’s Hyung-jun’s brother and all, the two have very similar-sounding voices. They’ve got that nasally-sounding thing going on – which really isn’t their fault, but it does get a little difficult to listen to at times, especially if they’re alone. And especially if they’re singing a ballad. The more I listen to K-pop, the more I realize that not every voice can do a good ballad. You’ve gotta have a certain vocal quality and timbre for a ballad to be a ballad, not just a slow song. Of course, this completely contradicts the current trend demanding that every freakin’ single, mini album, or album must have a ballad on it. It totally kills me, but I’ll learn to deal.

I’m really quite torn about this album, because the idea and concept behind it is completely on-target with everything I’ve ever said regarding sunbae artists making “comebacks” and competing with the rookie artists that are currently flooding the market. But the sloppiness of the “Girl” MV is really throwing me for a loop. Granted, it’s not as if S Plus Entertainment could help it if they didn’t have the budget to pull off the MV that they wanted. And, I mean, is it really fair to discount a promotional effort simply because there wasn’t enough cash to support the awesome ideas that were clearly at work?

But at the end of the day, I guess I’m mostly reviewing this album for the sake of y’all: the readers. So is Girl worth a listen, just for the fun of it? Most definitely. Do I recommend watching every single live performance of “oH! aH!” from here on in? Probably not. The music on the album alone gets a solid 3.5 out of 5, which is a fairly acceptable score if you’re looking for a few more tracks to add to your workout playlist. But if you start looking into Kim Hyung-jun’s promotional efforts on a deeper level, you’ll realize that there’s a lot happening behind the scenes that may change your view on the album entirely. It certainly changed mine, and now I’m stuck in a horrible state of confusion in which I will agonize over this album ceaselessly for months – or until I have to write my next review for next week.

Speaking of next week: which album do you want me to review next? I guess I’m going to make this whole “request-a-review” thing a regular occurrence now – mostly because a) y’all usually come up with good ideas, and b) I’m bad at making up my mind. Let me know in the comments section below, and I’ll see you next week.