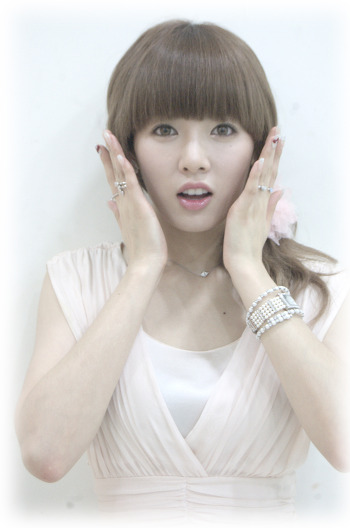 Do you sense that feeling in the air? It’s a new Music Core for a glorious new month! A Music Core that will likely go down in the books as the most insignificant episode ever, considering what this week’s Inkigayo has to offer. But you know what? I didn’t want to recap stupid old Inkigayo anyway. The live streams will be overloaded with people, and regardless of what I wrote I’d have commenters damning me to the bottom of the Han river. Whatevah, I don’t even want it! So there. Unfortunately there’s not a lot going on with this episode, though we do have super special awesome guest MCs HyunAh, Secret’s SunHwa and Lee Hongki.

Hongki looks a little dopey and confused (I think it’s the hat), SunHwa looks lovely, and HyunAh also looks pretty, though it didn’t escape me that her MC dress is probably the most clothes I’ve seen her wear.

So, all right, I’m just going to get this out of the way: HyunAh, what the hell? I know people have different personas on and off stage but we all know that doesn’t really apply to kpop idols, does it? Was this your decision? Your manager’s decision? Maybe a chance to screw around and not have to be sexy-lolita-HyunAh for one day? Which ok, you’re completely entitled to that, but just to let you know; that super high cutesy chipette voice and aegyo act freaked me the “f” out. Kudos if you were just letting your natural personality shine through, but just a suggestion; it’s a little hard to pull off a personality transplant after things like this. It’s hard to go back. It’s really really hard to go back.

So, getting that out of the way, let’s get on to the performances shall we (I know you could care less, but humor me here).

Dalmation: They make me smile. The whole image, it is almost too precious to live. I can image Will Smith (Fresh Prince Will Smith, Not multi-million dollar blockbuster movie actor Will Smith) and his homeboy DJ Jazzy Jeff forming this protege group if indeed they had a protege group. Go back a couple of decades, this song would have been the sh.t.

Which kind of makes me sad that these guys are going to look back on this in several years and experience that slow uncomfortable feeling where you start analyzing your life and thinking, “was it all worth it? What the hell did I do?” But for now, so cute! I vote they do Chow Chows next.

‘O-IWI-O’ – from my understanding, the male response to ‘Gee?’ First off, thanks for coming to the party a few years late. Y’all could’ve made bank on this a couple of years ago. Also, the idea of this being a response song…..doesn’t quite fit. Everyone knows the cutesy, repetitive ‘Gee’, young girls first stirrings of love underscored by infectiously choreographed dance moves. ‘O-IWI-O’ is like the response you get from that guy at the party, the one that’s always looking at you, and you think he’s kinda cute but also a bit of a creeper, and every week he’s going out with someone different, oh and by the way, all his girlfriends bear an uncanny resemblance to you.

Moon Ji-eun: Don’t know a lot about her and the song, but one of the painful performances I’ve ever experienced. And on Music Core that’s a hell of a feat. There’s nothing to poke fun at, it’s just…bad. Maybe she saves her half-ass performances for Music Core (like most other artists)?

Poor JQT. I actually like their song, it’s a catchy little diddy. But man, did they promote at the worst possible time. They’ve got two rappers and even their own Amber! But no one will notice. They sure as hell won’t after tomorrow.

Oh, yay! We get U-Kiss’s suicide inducing “no smoking” song. A little cheerful for a public service announcement no? It would be a lot easier to follow the U.S.’s lead on this campaign – take a graphic picture of a diseased lung, blow it up to billboard size, and place in areas people are most likely to see it, particularly restaurants. That should do it.

Gavy NJ: It’s clear ballad season has come back into bloom, which is good, because a little diversity is always nice. That doesn’t mean I’m going to listen to them, but you know, good that they’re here.

Infinite has their goodbye stage. I haven’t had the opportunity to talk about them very much, but ‘She’s Back?’ My jam. It makes me happy ok? Suddenly I’m back on the playground in my hammer pants and I don’t have to worry about twenty-page papers, learning foreign languages, and finding my way around a city with the worst street design ever.

Personally, I hope Tablo wasn’t really punking us and Infinite lives to see another day. Sellout my ass, the man is a genius of the James Cameron variety. SHE’s BAAAAAAAAAACK……………………….

Sistar: Well I guess we’re just going to pretend those ‘Push Push’ days never happened? I don’t blame them really. Their song is catchy and pleasant to listen to, but their concept fills me with rage. The green dress-polka dot combo is not helping. The frick? They couldn’t find HyoRin a green shirt?

I don’t why I should be surprised, but it figures that Sistar would finally get fan chants with this cute ass song.

*Watch for Dasom’s mike sailing off into the wilderness. That was unexpected, but nice save.

G.Na’s last song was catchy, is that why it seems she’s not getting as many fan chants as before? C’mon ladies, this is the screw-my-ex-I’m-sexy-as-hell song!

FT Island: There is always something in the back of my mind that places them in the kpop coterie and think, “the hell are they there?” They don’t fit somehow. And I mean that in a good way.

Rainbow: I will admit that I do like this song. When I can listen to it on my iPod without the visuals. Rainbow has no identity, they are doing SNSD worse than SNSD themselves and it is sad. But if I have to choose between them and Nine Muses, I’d rather not have to place my head inside my oven for the evening.

MaMaMaMa Madonnna Donna!!! I will freely admit my biases here because I love not necessarily just the song, but Secret’s performances. So high energy, though maybe too much because they sound a bit out of breath this time. I think they are going for Beyonce-lite, but I’m feeling the Destiny’s Child vibe and, sorry guys, I’m thirteen right now.

SHINee have an outdoors pre-taped performance lauding the soul possessing powers of Lucifer. Don’t believe me? All right here, my friend. Don’t be swayed by those ruby lips and horrible haircuts. It’s all a conspiracy. A conspiracy!

Homme: I don’t quite understand the overwhelming popularity of the song, but it sure is purty to listen to. Just two guys, shooting the breeze, being guys, singing passionately to one another. Good song.

We close out with Taeyang and the YG interpretive dance group, with Taeyang’s copied inspired choreography to ‘Thriller.’ I do think the choreography is interesting and inventive, and if there is one artist that could make it in the States, I put my money on Taeyang. His admiration of Usher, Omarion, Michael Jackson et.al serves him well in exhibiting a Westernized sensibility. Yeah, he’s Asian, but there are some things that trump prejudices and cultural lines, and that is well-muscled biceps my friend.

To the one or two people who bothered to read this, I hope you enjoyed and everyone, brace yourselves for cataclysmic destruction that is sure to rain down upon us after Inkigayo.