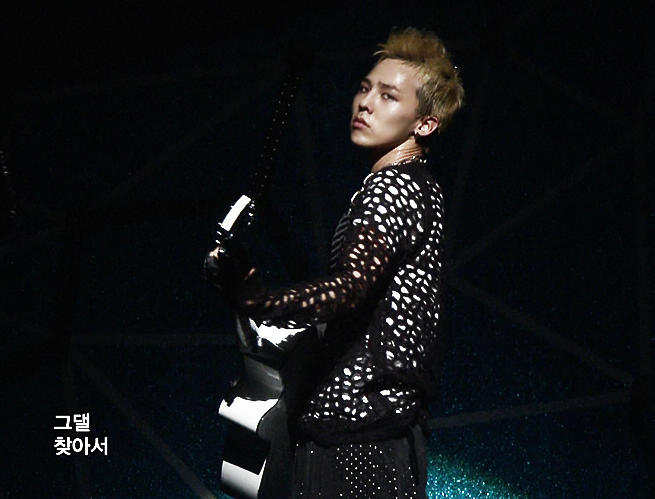 And Big Bang! Ah, alliteration! But seriously, I’d say 70% of today’s performances had our idols and their backup in monochromatic pattern (not Big Bang though, what rebels!)

Still, there is a lot of crazy going on in the world right now, and sometimes we just need some forced lip-synching and bad production values to get by. Let’s begin, shall we?

With a performer named Ye-Ara, and I can see why she is first, as I have no idea who she is. She has kind of a weird little song about ‘Drinking Americano’ , which yes, I advocate every now and then (in moderation), but did a vocal in the track just encourage everyone to get high? Which the language barrier, you can never tell, but regardless of the syntax, you guys may want to remove that if it is a line.  Real Americanos don’t get high (where people can see them).

(the M!Countdown Performance for now)

What can I say? Dalmation and that damn couch. It is nice to see male idols do more on stage than dance in V-formation like they’re flying south for the winter.

Sori, has a “Dancing Heart” which is really a just polite-in-company manner of saying she’s a two-timing floozy. But the violins are nice.

It’s the 5dolls that sound like ABBA. Uh, whoa, and looks somebody tried to sex them up except whoops – how did that middle school student get in there? Though Eun Kyo is cute (and flexible), she’s unique looking. Still, would have been nice to have some cohesiveness with the wardrobe.

Some commentators on this site have mentioned that Song Ji Eun’s ‘Going Crazy’ is a Korean version of Eminem and Rhianna’s ‘Love the Way You Lie.’ I would beg to differ, though it’s not a bad song. Something about it just doesn’t connect with me, but you can’t really win over a song by two international artists whose turbulent love lives spread implications all over the song.

Dal★shabet is here to confuse the hell out of me or make me go deaf, one or the other or both. Honestly. I can’t tell if this is genius or just annoying. On their mini-album they have this whole, “we are aliens” theme going on, so I could give them points for being quirky but…..ah, next song please.

It’s K.Will’s comeback, and he sounds pleasant with black/white dancer troupe. Watch him sing so hard confetti falls from the ceiling.

Jewelry’s got dancers and a remixed song, someone’s stepping up today – my eyyyyyyes. Lord, why? They had a good black and white thing going.

Yeah, Tok Tok! Love how Soya -who has a good voice by the way – is up there for the catchy-dance move-eye candy, and Sangchu and Shorry J just take the chance to do whatever the hell they want.

Kim Hyung Jun is finally going solo from SS501, with a very kpop-friendly song. Perhaps they shared pointers  because I can totally see Seungri singing this.

Kahi’s performance has some weird red carpet on the floor and is obviously recorded, though I think they could have picked a better place than a warehouse. I know MBC is preparing for their big concert in Thailand, but man throw some won their way why don’t ya?

Now we get to watch MBLAQ go onstage and try. We all know what’s coming next, and it always kind of sucks to be essentially the opening act for the steamrolling comeback group. Is that a hint of mustache on G.O.?

Finally Big Bang on MBC! Despite my criticisms of the mini-album, ‘Tonight’ was definitely the best choice for a comeback single. It’s just a shame Music Core’s production values such so hard. Which, ok they aren’t usually that great to begin with but everything on their account just seems thrown together and lazy. They did try to compensate by giving the guys lots of slo-mo and tons of special camera angles. Ha, ever since that ‘Night After Night’ episode I can’t stop noticing how hilariously stiff T.O.P is on stage. It works in its own special way.

G-Dragon on *cough* guitar with superseriousartistface – oh wait, don’t smash the thing luv! You’ll never learn that way. I wonder how many guitars he’ll go through before this promotion’s over.

Well, that was….fine? It was a nice diversion for a kpop fan, as always. Also, don’t forget, if you want to give some of your time and support to those affected by the Japan’s recent earthquake and tsunami, there are countless ways to help.

Earthquake and tsunami: How to help