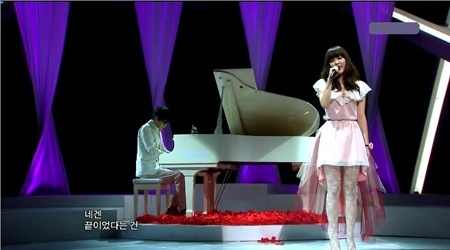 Okeydokes, not that anyone cares but to be honest have not been having the best month, or year shall we say –thus, I will try in vain not to bring down the mood in the room too much but hey,nobody’s really fretting over it, it’s Music Core! Ah, I feel better already.

I would blast this joint out my car windows, but the mimes. That ruins like 60% of  this for me. I don’t like mimes.

안녕하세요! – welcome to Music Core with our young nubile hosts and a harsh reminder that conversational Korean is a BITCH.

LPG
This isn’t the clip from this show, but you get the gist.

LPG are geniuses. They’ve got the trot thing but then they totally look like every other girl group out there which does nothing but cause mass confusion. Are they trot trying to do contemporary? Contemporary trot? WE DON’T KNOW. All we know is that they’re sorry they’re older and sexier than you.

My girls, the Piggy Dolls –I’ve come to terms with the name now. I’m happy to see the poor ladies have some flattering stage wear this time around. Love that these chicks dance better than 90% of groups half their size.

More convo from the hosts – god, I really got to start going to Korean class.

I wasn’t sure about San E in the beginning but this is just crazy enough to jolt me out of last night’s hangover. At that note, Park Hye Kyung more from you and your little bowler hat, please.

5dolls – well they’ve been a hot topic as of late though to be honest, they lose some of the sparkle without THE JAY. And ok, I like the choreography. Happy? They are kinda like KARA with more attitude….?

Oh and…what the hell is this? Honestly, I had to rewind this twice…I’m still not sure what I’m looking at – I’m blaming the guy with the blue hair- he is majorly throwing me off.

And now we have  Teen Top with the same mind f*** pink hair. Is this a new thing? Candy-colored hair? Though I don’t have much to say about the other hairstyles going on here. The ladies love it….though if you’re  young, cute and below the legal drinking age there’s not much  they won’t love.

I’m almost positive Britney Spears has “sung” this song in the last few years or so. Besides, aren’t the paps in Korea pretty tame? It’s the netizens they have to watch out for. Though I suppose that wouldn’t make as infectious a chorus.

Ballad. Stars. Lots of pointing. Next.

Back after so long –  though the new girls kind of blend in well. When you think about it, they’ve been around for quite a while, at least in idol years.  They better watch it though, the song is encroaching on Secret territory

I have to say though, on my side of town  “backing it up” has a totally different meaning.

One day at work I was doing…well actual work for once, and listened to Mighty Mouth’s entire album – I think I love them now. Seriously, if you haven’t done so,  give the album a listen now.

Kahi’s  debut  – we can expect good dancing at least. I’m surprised it took her this long to get a solo debut, freaking Orange Caramel went before her. The song doesn’t hit me particularly hard but something about her concept I like so in my completely unqualified opinion it stays.

Every dance club in my nightmares – I’m really sensitive to strobe lights lately.

I must be really letting this month effect me because….I listened to all of Infinite’s album too. Don’t laugh. It’s one of of those inexplicable unanswered life questions. Plus do you really watch those guys perform? Beneath their pretty floppy bangs, they WANT this.

Yo, I love me some Secret, but I think I’m ready to move past this pseudo-Grease thing. Zinger continues to rule the world.

Well, I suppose this one is for all the ladies on Black Day.

I really miss Debut G.NA – just saying I’m a little less likely to sing this song  in the shower.

We end with 2/5 of Dong Bang Shin Ki – you know, it would make the world explode but I would like them to replace the other three just to screw with everyone. For some reason it bothers to me to see only two people performing in a five-person group. I’m weird about numbers I guess.