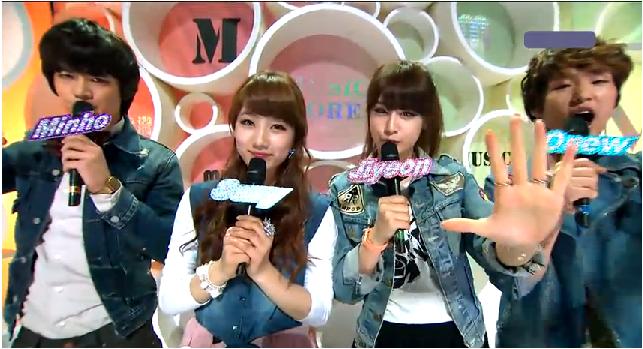 Hey hey everyone *insert aegyo here*- it’s Nadiyah subbing as a guest recapper for the one-and-only Ashe! To be honest, I’m more of an Inkigayo gal myself *“boo”s echo in my make-believe studio* -I think it’s my competitive spirit?!, but while Ashe is busy hitting the books this weekend, I’ll do my best to convey pithy, and more importantly, witty remarks to recap all of our fabulous Mu-Core performances today!

First off, here are the cuts of my co-hosts today-I mean, the Music Core idol MCs, Onew, Minho, Suzy and JiYeon:

JiYeon has a great reporter voice. These kids are also on crack. Or Red Bull. Mental note: looks like I have a lot of dance moves and aegyo that I need to perfect before hitting the big leagues. *Pout* Ah well! Onto our performances!!

Oopsie! Camera direction fail at 0:53. Over-the-knee white pleather boots don’t look good (or classy) on anyone, but I can see someone’s working hard to give Miss “Honey Thighs” a run for her money! Go G.Na!

IU- The Story Only I Didn’t Know

Sad IU is sad. *Tear* Where is my bubbly cheery PilSook-ah?! And her Jason doll?!

From sad IU to my favorite over-emotive boys:

As much as I like this song, seeing it live I am wholly distracted by the boys’ clothes (all from Rain’s line, I’m sure)-from Joon’s shirt trying to eat him up to Seungho and Mir’s pleather leggings. Although, when was the last time we saw a male idol on stage in a t-shirt. G.O.’s shirt I don’t mind. His pants? *Facepalm*

This, I didn’t hate. Great use of the WHOLE studio (arena?!-geeze they do it big in the ROK…), Soya, and their throng of back-up Rockettes! I loved the energy and the use of color for the wardrobe and stage. Also, parents in the audience?? *I got my eyes on you“, Mighty Mouth!*

He reminds me of a mix of Taeyang and JYP, but sadly, without the vocal ability or dance skills. Or soul. Not impressed. *Sorry!!* Not-so-rhetorical question: perhaps it was just this performance?

Next, a fierce female, please!

Kahi- Come Back You Bad Person

This is a sick dance beat made sicker by Kahi’s strong dancing and singing (and RIDIC body). *I totally have a girl crush on her.* But, I hate those boots too. Can’t have it all, I guess. (I just hate shiny leather!! Sue me.)

So she looks great. But did she seriously get on that stage and not sing for like a FULL MINUTE? *Eyebrow raised, disapproving “are you for real?” face* The dancing was good, not great, and obviously going to be the next “GEE” craze, but she didn’t even try to lip-sing to the chorus. Not worth the stage time. NEXT.

So, I’ve given this song a lot of flack for not being that interesting. Live, it’s a lot better, actually. AND I finally get why they wear the fanny packs- to hold their plastic toddler CELL PHONES! Why they have those, I have no clue. They’ll gain more recognition, I think, when they have a better, more cohesive, concept. *FIGHTING! Slash, good luck.*

Everyone’s wearing mini-skirts and at least knee-high pleather boots today, aren’t they? Note to self: obtain pleather knee-high boots for future Mu-Core recaps. She has a sultry, soulful, and jazzy voice. I think she should stick with that and not try to “popify” it.

These boys are a lot cuter after brawling on stage! *Cue make-believe studio audience laughter* As cute as they are though, this song bores me. On a brighter note, if they ever gave up KPOP I think they’d all be great musical actors.

So saccharine sweet I got a toothache just watching and listening to them. If there was a Korean version of “Kidz Bop” I imagine this would be on it. I’m not seeing or hearing anything “Supa Dupa” or “Diva” about this performance.

Now, just what we need to break up all that bubbly pop:

Lee Hyun- You Are The Best Of My Life

SUCH a great voice. Such a boring stage. My advice: black-out the stage save for one overhead light on him and dim low-lighting around the stage. Killer print on that jacket, though. Me like.

Aaannnd back to Club KPOP it is:

For a change, Music Core’s stage is PERFECT for something. LOVE LOVE LOVE Teen Top, but this song doesn’t showcase them enough. And they are still so young they haven’t learned to command the stage just yet. But them fangirls are loving it, judging by the screams. I hope the parents in the audience are all given ear plugs…

Infinite – BTD (Before The Dawn) Remix

Aww Inpinitu you will be missed. Though I am not a big fan (don’t have anything against them-just don’t listen to them), I can definitely see why they are so popular. These boys can definitely command a stage with their performances whereas their contemporaries such as Teen Top, are more lacking in charisma and confidence. Side note: this song would be spot-on for some futuristic, post-apocalyptic movie

Secret is cute, and the cut to the dancing MCs was adorable. But, I’m more interested to see what Secret will come back with next. I liked their stronger images with “Magic” and “Madonna”, but the fans obviously responded to their cuter image with “Shy Boy”.

To Infinite and Secret, I say *waves* Annyeong!! *waves*

Speaking of goodbye, we end the show with the DBSK duo: 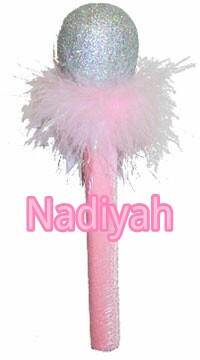 Can I have my be-glittered, name-emblazoned mic for hosting-whoops!-writing the recap now?? Alrighty, until next week (when hopefully Ashe will be back!), here’s Nadiyah signing out! *Wink*

Other artists on the show but I didn’t find vids for: Piggy Dollsand Ye Ara