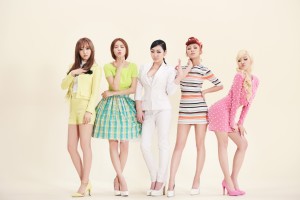 Since their solid debut in 2014, Mamamoo has graced us with two rounds of energy-filled promotions, and three drama OSTs and Immortal Song 2 performances. In light of the release of their very first full-length album, Melting, I thought it would be interesting to delve deeper into what has made them so successful, and to comment on the direction that they are moving towards.

There is no doubt that Mamamoo’s vocal prowess is a crucial factor. None of the members play a filler role—all of them are either incredibly good at singing (Solar and Whee-in), rapping (Moon-byul), or both singing and rapping (Hwasa). This even distribution of vocal skills within a K-pop group is probably only paralleled by SPICA. Unlike SPICA, however, Mamamoo has enjoyed a strong repertoire of songs that are consistent yet versatile in showcasing their R&B style of singing.

Aesthetically and musically, Mamamoo has been sticking largely to a retro concept. This concept is not unique to Mamamoo: Wonder Girls has been promoting retro pop songs since debut, and Secret once carved it out as a conceptual niche before more recent releases saw them stuck in between the girl group clichés of cute or sexy. Numerous other girl groups have experimented with the retro look and sound as well, although in many cases they usually assume and shed it one or two promotional cycles later.

What Mamamoo has done differently is to mix and match old school visuals and sounds with some contemporary touches; their MVs are often lively postmodern pastiches. In “Don’t Be Happy” and “Peppermint Chocolate”, the girls’ white shirts, black pants, and fedoras are combined with music hall accessories—furs, fishnet stockings, and gloves. “Mr. Ambiguous” follows in the vein of alternating monochrome scenes with fun pops of colour in the 1960s mod-style shift dresses, while “Piano Man” mixes a black and white film noir look with select colours of red and gold. “Ahh Oop!”, my personal favourite, switches between a square aspect ratio and videos placed within still images of retro newspapers. “Um Oh Ah Yeh” is the most modern-looking of the lot, but Mamamoo’s denim-on-denim outfits have a 1990s vibe.

The strength of Mamamoo’s retro-meets-modern strategy lies in how it doesn’t rely on the concept alone—especially the visual aspect—to promote or hold the songs together. The songs are a tour-de-force on their own, and the visuals are just there to support Mamamoo’s distinct singing style and their powerful delivery. Mamamoo’s vocals have a recognisable Urban R&B quality, at times leaning more towards jazz and swing. Even their more pop-infused tracks have a Motown vibe in their fusion of an upbeat sound with a soulful delivery. Their signature style gives their songs a classy, glamorous feel, and Moon-byul and Hwasa’s raps add an edge.

Above all, Mamamoo’s MVs and songs seem to have been crafted with one priority in mind: performance. Their image and music doesn’t just bring back retro looks and sounds. More importantly, they bring back the quality and experience of live performances of the past: the sheer vitality of live singing that reigned in a time before elaborate stage lighting, effects, and sets. Mamamoo’s MVs are always performance-oriented, with the members breaking out assorted 1960s-inspired dance moves to create a fun, wonderfully infectious mood (for instance, the Soongguridangdang dance in “Mr. Ambiguous”, a wacky take on the “mashed potato” move).

Mamamoo brings their retro niche beyond their own songs and into their live performances. We previously covered their fantastic mashup of “Uptown Funk” and “Um Oh Ah Yeh” at the 2015 SBS Gayo Daejun, for which they donned vibrantly-coloured suits that completed the Motown vibe of the performance. Their Immortal Song 2 performances haven’t disappointed either. They jazzed up Lee Moon-sae’s upbeat ballad “Flying, Deep in the Night” with harmonisations and shimmies, dropping can-can and salsa moves before surprising the audience by switching to a Latin-inspired instrumental backing energetic rapping and powerful R&B vocals. The mishmash of styles could have been disconcerting, but somehow Mamamoo pulls it off.

The promotional strategy for Melting is similar to that of Mamamoo’s debut mini-album, Hello: two singles, “I Miss You” and “1cm Taller Than You”, have been pre-released a month and two weeks in advance respectively, the latter accompanied by a quirky MV. The title release “You’re the Best” picks up from where “Um Oh Ah Yeh” left us fashion-wise—the 1990s—bringing back boot cut jeans, cropped sweaters and raglan tees, and pleated plaid skirts with Cher Horowitz vibes. Likewise, the album takes Mamamoo’s niche in R&B singing and presents it anew by experimenting with different genres. Do stay tuned for more analysis in our upcoming MV and album review! 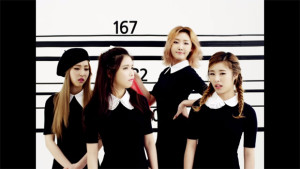 With each new release, Mamamoo has been building on their retro concept, remaining anchored in their signature sound while at the same time pushing their aesthetics and music in new directions. It is this balance between stylistic consistency and flexibility, paired with their incredible vocals and stage presence, that has led to Mamamoo’s steady rise towards a top class act in K-pop.