The Wonder Girls 'Reboot' Right Back to 1987 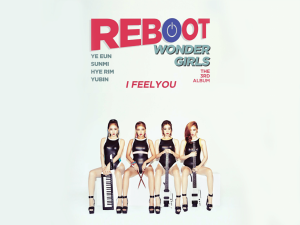 The Wonder Girls have a long and respected history in K-pop. They were the original second-generation queens, scoring a trifecta of hits with “Tell Me”, “So Hot”, and “Nobody”, but repeated departures to America left the quintet in the dust of their competitors.

The marriage of Sunye and her choice to pursue missionary work and the departure of Sohee from JYP, plus the solo debut of Yeeun as Ha:tfelt left Wonderfuls in the position of assuming that their group was gone; it was just that the words hadn’t been said.

So when it was announced that Yeeun, Yubin, and Hyelim would be making a comeback, with Sunmi returning as well, the internet almost exploded. The reveal that their latest concept would be a 4-piece band composing their own music drove the anticipation for Reboot through the roof. The reveal that said the band would be an ’80s throwback then drove it into the stratosphere.

Reboot opens with “Baby, Don’t Play”, a song that sets the tone for the album straight off the bat. “Baby, Don’t Play” is synth-pop that is so utterly ’80s it defies logic. From the opening note, everything about this screams “1987” in the most wonderful way. The synths, the keytar, the almost-funky bass line, the warped lyrical cold open and the gentle pleading for a guy to treat the Wonder Girls right combine for a solid opening and a killer throwback.

“Candle” takes its direction from one of the biggest icons of the ’80s — Madonna, specifically Like A Prayer. It is a darker take on sugary synth-pop, using gentle vocals to conceal the adult desires those voices are conveying. “Candle” is soft, desperate, pleading for sex, all interwoven with edgy keyboards, and notes drawn out just a hair too long. Guest star Paloalto isn’t bad, but compared to the emotionally rich performances of the Wonder Girls, he pales. As should any man when Madonna is invoked.

Title track “I Feel You” brings the pop-rock far more into balance, pepping up a bit from the prior two tracks, while highlighting the bass and guitar in the mix a little more, as well as giving Yubin a more driving role on drums. The performances are top-notch here, seduction oozing over every aspect of the song. The highlight, though, is the breathy repetition of ‘I feel you’ sprinkled throughout the chorus that stays just shy of not safe for radio.

“Rewind” slows Reboot down for the first ballad, albeit a mid-tempo one. “Rewind” really lets the band concept shine, abandoning much of the prior synth in favor of playing up the genuine instruments. The lyrics also really stand out. The laments for the good parts of a relationship are par for the course, but the metaphor of rewinding back to those times speaks to the illusion of memory much more. We all want love stories like movies — passionate, and perfect, with a guaranteed happily ever after. But life doesn’t go that smooth, no matter how much mental editing we do. The magic of a movie will never exist in real life, and fixating on it just makes reality harder to deal with. 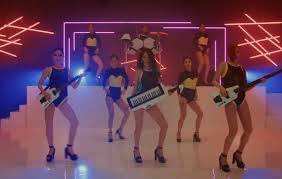 “Loved” moves the Wonder Girls into the  semi-robotic funk that gained ground in the late ’80s. It has a harsher, staccato sound that really contrasts with the gentle, drawn out sounds that have so far dominated Reboot. Sadly, it falls prey to one of the common issues of ’80s funk in that it is crowded musically. The instrumentation is cluttered with unneeded effects that drown out the vocals and melody, less music and more straight noise. It’s accurate to the sound they’re emulating, but that doesn’t make it good.

“John Doe” is, surprisingly, the first track on Reboot to contain one of the most elemental aspects of ’80s music: bombast. “John Doe” has sass; it has groove; it has horns. The twinkling keyboard meshed with the reverberating bass are a heady combo. The lyrics are both fun and clever, with the ladies trying to seduce John Doe; i.e. any man they see. The confidence they have is unshakable and admirable.

“One Black Night” is the perfect follow-up to “John Doe”. While the first half of Reboot was fairly bright, hiding the allusions to sex behind wordplay and coy smiles, “One Black Night” is easily the darkest song on the album. The fist-pumping energy is almost enough to distract from the fact that “One Black Night” is about getting lost in a bottle and whoever’s nearby. It’s desperate and ugly as Sunmi and Yeeun croon about the release of going wild, capable of remembering it’s a bad idea, but too far gone to remember why.

One of the things that’s easy to forget about the 1980s, is that the same year Rick Astley and Belinda Carlisle were lighting up the charts, NWA was coming straight outta Compton. So, it’s not actually odd to hear a call-back to the dawn of hip-hop alongside Madonna-inspired pop fluff. “Back” is a duet for rappers Yubin and Hyelim, a chance for them to step up out of the shadows and up to the mic. This is what Wonder Girls fans were waiting for: a scathing take-down of everyone who said they were over, all over a beat that’s both basic and invigorating. The only downside is that my brain stopped registering ‘back’ as an actual word by the second chorus.

“Oppa” is a New Romantics’ ode about going out and partying all night– a fitting topic all things considered. More importantly, it’s a rebellion against the ideal of having a protective oppa to watch over his girlfriend. It’s not charming to tell your (adult) girlfriend she can’t go out, it’s controlling, and the Wonder Girls have no plans to let any guy tell them what to do. If he can’t trust his girlfriend because she likes to dance, well, that’s a ‘him’ problem. You can practically here the uncaring shrug as Hyelim realizes her boy hung up on her before going out with her girls.

“When Love Tries To Leave” is a haunting song about trying to piece together what went wrong. When relationships end explosively, it’s easy to pinpoint when it imploded. But when it faded, that’s harder to deal with, as there’s one thing that can be marked as the beginning of the end. And the Wonder Girls try to do just that, caught in a web of eerie music and echoing vocals, lost in the haze of the past. But it feels empty, like there’s no emotion behind it. It’s a puzzle rather than a problem. 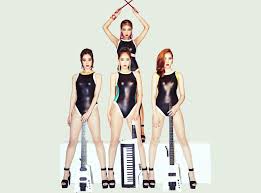 “Gone”, on the other hand feels extremely personal. The pain of liking someone, but knowing they’re just using you as a band-aid for the girl they really love is brought to the forefront and put on display in a brutal show of force of emotion. The instrumentation is almost other worldly, with rising and falling keyboards, slightly off guitar and some almost shiny synths. Yet the lyrics feel so raw, the delivery so visceral that “Gone” is almost forced to be considered as based in reality.

“This Moment” closes out Reboot, a choice that is both logical and painful. On the one hand, “This Moment” is a heart-lifting ballad, about focusing on the good parts of  a relationship but not lingering on something that’s ended. It also pulls back on the production to allow all four girls to harmonize beautifully and let Reboot end on a hopeful note. On the other hand, it’s a cheesy ’80s ballad back from the musical grave. True appreciation for “This Moment” requires an astronomical tolerance for narm.

Reboot is a love letter to the 1980s, a feelgood throwback that should put the Wonder Girls right back on top. More than that, it’s an amazing body of work. Every song, minus “I Feel You”, was written by Sunmi, Yeeun, Yubin, or Hyelim, and while many of the songs are simple, none are rip-offs. I can pick out inspirations here and there — Madonna, Cameo, Adam and The Ants — but they always sound like one cohesive band, not 12 imitators. This Reboot is one that needs to stick.