Counterpoint: The Deal With Airport Fashion 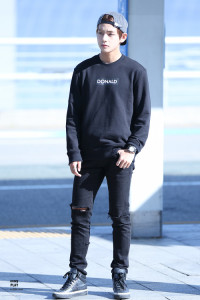 The truth hurts: idols are public figures. No matter which aspect of their lives, they are expected to keep up a front. Be it in terms of how they look or what they say, idols are being held up to certain standards as long as they are out in public, even if they are on personal time. The age-old debate then ensues: exactly how much privacy should idols have? How much privacy are they even capable of preserving? And to what extent do they have to present a put-together front?

One area that comes to mind in this respect is the idea of airport fashion. While it is a topic that has been a source of great frustration for many, it has nevertheless developed, in the recent decade, into a phenomenon very much integral to K-pop. And while it can sometimes become unnecessarily stressful particularly when netizens compare idols and pit them against one another to ‘see who wore it better’, it is undeniable that airport fashion provides for yet another avenue for fans to learn more about their idols. It is also a convenient platform idols to express themselves in the otherwise highly-regulated industry of K-pop.

A common gripe about the airport fashion phenomenon is that it exists because the demand for it exists. With fans willing to camp outside airports with their enormous lenses, it is not surprising that idols are increasingly pressured into keeping up with the perfect image even when off official cameras. While this is true, it must also be acknowledged, however, that the issue lies not in the fact that fans are being obsessive, but rather that fashion is so very much intrinsic to K-pop as a genre and, in fact, as culture even. Commonly used as a form of self-expression, fashion is very much integral to one’s personality and if being an idol is about being a celebrity personality, there should be no concessions given regarding their fashion choices. 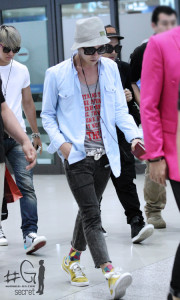 At the same time, parallels can also be drawn from various other cultures: Duchess of Cambridge, Kate Middleton, has been hailed as a fashion icon and every appearance of hers in public has resulted in numerous fashion analyses across magazines and newspapers alike. In the U.S., celebrities are similarly subject to critique and praise in regards to their daily fashion choices.

So why does the culture of airport fashion in South Korea seem like such a big deal? At the end of the day, the choice to become an idol is the recognition of and preparation to be under intense scrutiny; and what is more apparent than appearance?

Another point worthy of consideration is that airport fashion can be used as yet another medium for publicity and influence and as an idol, publicity and influence are everything. How many times have we seen G-dragon cement his status as a fashion icon with evidences from his airport fashion? How many tumblr blogs are there out there that are dedicated to adapting idols’ fashion choices for us laypeople – because, you know, not everybody can afford that Givenchy backpack or that Acne Studio jacket. So really, is airport fashion all that detrimental? 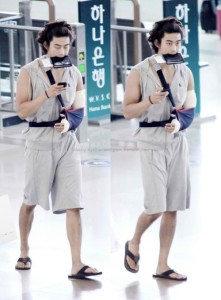 Which brings us to the final and most important point: it is all about perspective. To reiterate, idols are public figures and public scrutiny is inevitable — it is not a phenomenon unique to Korea. What this also means, then, is that sometimes it is all a matter of perspective.

Fans will always want to see their idols – no matter what they are wearing; so it is up to idols themselves in how they deal with this. It is not uncommon to see idols taking the mickey out of the practice: Super Junior cosplaying, Kim Jang Hoon’s deliberate decision to wear an apron, or even Taecyeon just simply not giving a damn, choosing to dress in some really comfortable-looking clothes and flip-flops.

Granted, it is often difficult to ignore what people say about you, especially when so many K-pop idols today are still painfully young. Furthermore, with fashion being very much an extension and an expression of the self, criticism can sometimes have a compounded effect on an idol’s self-confidence. But at the end of the day, if idols are able to overcome this mental barrier, the culture of airport fashion has more benefits to offer than it is often credited for.