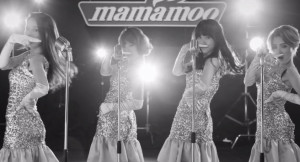 I know it’s only June, but I’m just going to go out on a limb and say it — Mamamoo’s debut is my favourite of the year. Rookie? What rookie! These girls give off the airs of well-worn veterans who’ve been workin’ at it for years.

Maybe it’s the retro edge to everything they’re doing that hits the right chords with me — the sleek, classy styling, the jazz-rock fusion melody, the throwback choreography. Or maybe it’s the sheer number of impressive cameos in this music video — Wheesung (“Director”), Baek Ji-young and K.Will, just to name a few — whose approving glances are subliminally colouring positive my opinion of the girls. Or better yet, it may be that they’re (gasp) more than a bunch of pretty faces, and that they may possess some noteworthy pipes as well?

Mamamoo has released a selection of impressive pre-debut tracks, but “Mr. Ambiguous” is their official debut single. From its solid throwback musicality and delivery, the song doesn’t stray too far from the image Mamamoo has created for themselves. 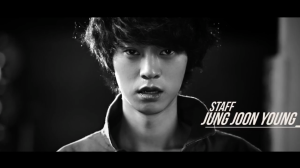 The MV opens with a sort of meta touch — you see the girls getting ready for a video filming, and the song is played out with the monochromatic scenes of preparation, interspersed with more colourful scenes of edited footage. It’s basically an MV within an MV, a concept that allows for all kinds of fun cameos — Bumkey as songwriter, Jung Joon-young as an adorkably smitten staff member. and CNBLUE‘s Jonghyun as a session musician (wow).

It really is a smart move to have all these established figures in the music industry — and from so many different genres as well — featured in the music video. Beyond lending the girls advertising weight and stamps of approval from respected musicians, it could very well entice fans of these much more popular artistes to check them out, out of curiosity (and to see oppa/unni). It works because the girls have shown their abilities to deliver and impress — they only needed the right bait to bring in the audiences, and I’m pretty sure a CNBLUE guitarist is… well, a pretty good catch.

Baek Ji-young’s cameo in particular was an especially effective insertion — she was involved in a hidden camera trick on Mamamoo, which revealed a certain emotional vulnerability to the girls. By her addition, the girls are now not only talented and attractive performers, they’re also sensitive human beings. Always useful for public perception, that.

The lyrics of the song itself are in line with the image of the coolly loving woman that Mamamoo has been relentlessly pushing forth since their pre-debut releases. The boy in question is an ambiguous suitor, and the girls ask, with a touch of quirk, why he is “not being straight, like a beret”. While this could’ve easily turned into a sad, sad song about heartbreak and unreciprocated affection — as songs of this ilk tend to dwindle to — the combination of upbeat jazz melody and sassy performance has kept it from becoming a drag.

An especial favourite is the fabulous repeated line of “Shh! Oh, ladies and gentlemen, let’s get on with the show.” Rather than going with the whole oh-he-no-love-me-my-life-is-over rigmarole, the girls cheekily remind us that despite some vague confusion in the love-life arena, the show — life — must go on. Life’s too short, yo.

Thanks for the dose of awesome, girls. Mamamoo has definitely delivered the goods in this most impressive debut, and they’re definitely a group to keep an eye out for.