Lee Sung-hwa — better known as Gray — is someone who has, in the past few years, made a mark for himself in the world of music production. He’s a part of the VV:D crew and he’s also signed to the AOMG label fronted by CEOs Jay Park and Simon D. His self-described music interests span neo-soul, R&B, and hip-hop; Gray strives to create and perform quality music in these genres. Seoulbeats has covered a slew of popular hit-makers in the past, but Gray is a producer who has a more defined musical brand. Earlier this month, we covered a few of the top composers of 2014, and Gray is listed among the top ten. He was ranked number 8 for having his produced songs stay in the top ten of the charts for a total of 6 weeks.

Better known as a producer, Gray has worked with many hip-hop and R&B artists. He shares his music interests with people he collaborates or produces for – including Dok2, Swings, P-Type, etc. Because of this shared passion for hip-hop and R&B music, he and a few other artists, Zion.T, Crush, ELO, and Loco, have formed the collective known as VV:D — which is pronounced vivid. They frequently collaborate in production, arrangement, and song features, and they also perform together. It’s quite exciting to see a group coming together based off their mutual interests in music and culture. This is probably what sets Gray apart from several other producers – he veers towards genres that interest him, and he’s aligned himself with a group of like-minded individuals — as a group, they push one another to make great material.

As a child, he listened to hip hop from the likes of Tupac, Coolio, and artists from YG Entertainment (circa 1999), but he only started to seriously pursue music in high school. He was a computer engineering major in college, but put his education on hold after enlisting in the military. When he returned, he tried to go back to school but eventually dropped out to pursue his passion in music. The most striking aspect of Gray’s nature is his devotion to hip hop – hip hop for him is not just the music but also something engrained in his lifestyle. This is why his lyrics come off as personal — they’re drawn from his life stories. From the underground circuit, he’s moved on to production roles that have allowed him to reach a broader public scope. He’s worked on the arrangement in Infinite H’s “Without You” with Zion.T and Primary; he’s helped produce Zion.T’s “Click Me;” and via a song arrangement engineered for Jay Park, he’s also been featured on KBS Immortal Song 2.

It was through some of their shared friends (Crush and Dok2) that Gray first came into contact with Jay Park. After working together on Immortal Song 2, Jay Park came to recognize some of Gray’s capabilities, and he later offered to sign him to his AOMG label. Gray became the first person from the label to put out an album — Call Me Gray — in October 2013. The album contains four tracks featuring artists such as Swings, Crush, and Dok2. The title track “Dangerous” features Jay Park and it’s peaked at number 67 on the Gaon Digital Chart.

Stepping aside from Gray as an artist and circling back to his production prowess, some of his produced tracks have been finding their way to the top of the charts this year. He’s worked with Gary from Leessang on “Shower Later,” which topped the digital charts earlier in January, and he’s produced “Metronome” for Jay Park. Even with these successes, he’s continued to work relentlessly on honing his craft. He’s been studying different parts of the production process — such as mastering and mixing — and longs to be able to “produce his own songs completely, from start to finish.” It’s with this sense of improvement that I find his work absolutely compelling. This self-awareness and motivation to perfect his art is laudable. Right now, Gray is hoping to grow his abilities so that his next album will be even better. He’s definitely someone to look out for. If his recent chart success and self-improving mindset are any indication, Gray will only continue to grow as a force in the Korean hip hop and R&B music scene. 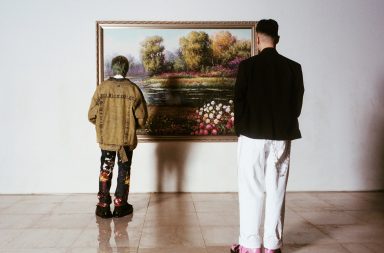 Elo and Penomeco Bring Gray Along for an Exhibition on “Love?”