Food, Anime and Beyond: The 2015 Halloween Costume Round-up 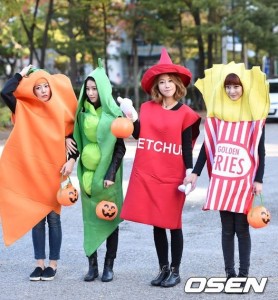 Halloween may be officially over, but there is so much dressing-up to pore over! So much, in fact, that there is no way I’m going to be able to cover every single costume in a single post. But I know I’m going to try, anyway, because I like my dress-ups.

In addition to SM’s annual Halloween bash — which was titled Wonderland for 2015 — there was also BTS’ Halloween party held in conjunction with Naver‘s V app, as well as Seventeen‘s fanmeet, among other events. Other groups used their arrival at Music Bank to show off their Halloween spirit.

There are so many ways to collate the collection of outfits from this year: by idol group, by location, by quality of costume, etc. But, considering the amount of overlap that went on this year, I’ve decided to group this year’s outfits by theme.

While I endevoured to include as many idols as possible, it is likely that not every cool costume will make this post. However, this is where the comments section comes into itself — please feel free to include all of your favourite outfits, whether featured in this post or not, in the comments below!

We begin with the most epic K-pop Halloween showdown of all time.

First up, chicken-loving Onew outmemed everyone by dressing up as KFC mascot Colonel Sanders. The guy even had a bucket of fried chicken with him. Then, emerging from a huddle of coordis armed with face paint, was Kim “Ronald McDonald” Kibum. After making a fashionably late entrance, he wasted no time in perpetuating the junk food rivalry:

These two were pretty much the #1 reason why Shinee was trending on Twitter that night. But Onew and Key weren’t the only idols to lay their bodies at the altar of Food. Melody Day looked particularly eatable on their way to Music Bank: bonus points for making healthy choices! Another healthy choice was Rap Monster dressing up as a wholesome egg at BTS‘ Halloween party. OK, it was a gutedama onesie, but it was still pretty cute, especially compared to the amount of effort the rest of his group put into their outfits. Like Jin, who was a pumpkin. True Halloween spirit, right there.

Bloody Hell, This is How You Do Halloween

Speaking of Halloween spirit, a number of idols kept things creepy and spooky. Day6 went all out out with the horror make-up, with fake cuts and blood everywhere. YoungK was easily the hottest vampire this year, though BTS’ V and Seventeen‘s Mingyu earning honorable mentions. Exo-M‘s Xiumin also brought the violence as the red-haired Chuckie. We even had a mad scientist, thanks to Day6’s Wonpil!

As for the ladies: Oh My Girl threw on headgear and capes over their stage outfits to become witches, devils and even a bunny. Hyoyeon inched closer to the creepy side by dressing up as some kind of furry demon, and Sulli spent the evening as a bunnyboiler (or eater, rather) Alice. This last one was my favourite outfit of the night, and I bet it was IU‘s, too.

I’m trying so hard to not fall for Seventeen, But they won’t let me be! It doesn’t help that these kids are not only great performers, but in on their fandom’s jokes. The one fans call “church oppa,” Joshua, decided to mess with everyone and arrive as a priest. Meanwhile, Hoshi and Woozi dressed up as each other, and Dino went hyperbole with his maknae status by dressing up as a primary/elementary school kid. 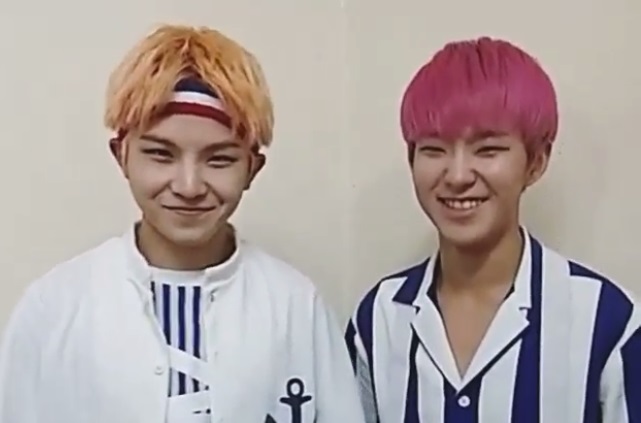 These idols aren’t muggles, that’s for sure. Gryffindors were well represented, with all Twice members donning the red on the way to Music Bank. Polyjuice potion ran freely, it seemed; it’s one way to explain the appearance of three Harry Potters. Day6’s Dowoon had the had, and Seventeen member DK‘s wand lit up; but Chenry Potter won the night with something better than any accessory — BFF Yerimione Granger! My only regret is that the other Hogwarts houses weren’t as well-represented; though, I can’t hold it against Slytherin queen Joy, who was too busy being a goddess. If only all the Edwards had come as Cedric Diggorys instead… 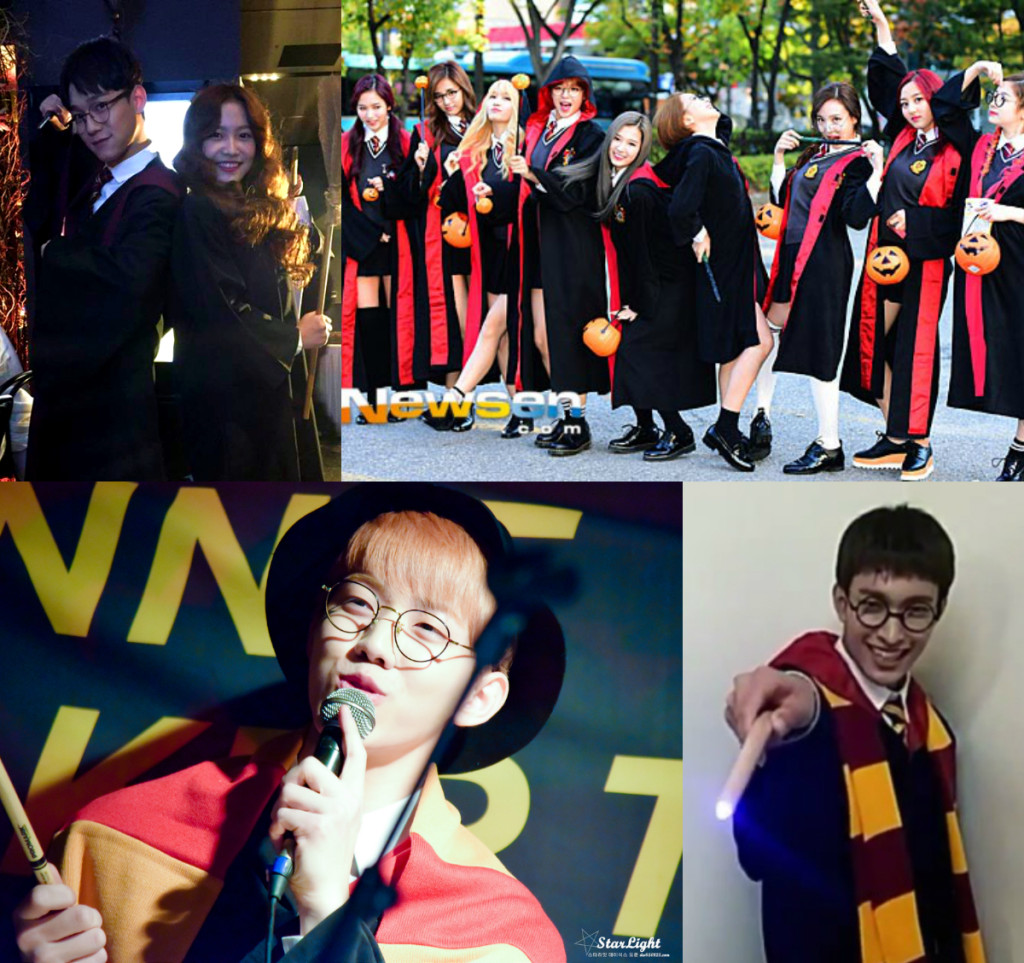 A Whole New World with Disney

In the world of Disney we had SNSD‘s Yoona and Yuri dress up as Minnie Mouse. Yoona’s sweet version and Yuri’s sexy version came together as an unintentional interpretation of the madonna-whore complex. There was also a Mickey Mouse, courtesy of BTS’ Jimin. On the Pixar side, Sooyoung aced it as Sadness from Inside Out; while in the new Star Wars section of Disney claimed J-Hope and Day6’s Jae (“Ghetto” Vadar, though?)

Seohyun and Go Ara both attended SM’s party as Maleficent; Seohyun looked impeccably evil and Go Ara hopefully made it through the night in one piece. First Kyuhyun, now Seohyun — these maknaes are out to get her, I swear. Another villain made his appearance in Seventeen member Jun‘s Captain Hook. And we got our Disney princess from an unexpected, but definitely not unwelcome, quarter: Jung Joon-young. Rocker Snow White? Yes please!

Also in the cinematic world, Super Junior leader Leeteuk slapped on a moustache to become Charlie Chaplin; and Henry was very current as Matt Damon‘s character from The Martian. Luna may have confused people on whether she was a full-limbed Imperator Furiosa, or a War Boy with a dog, but she looked amazing nonetheless.

Exo-K‘s Suho and Sehun were dapper as two of the Kingsmen (I know it’s originally a graphic novel, but this cosplay was undoubtedly inspired by the film), while Minho and Day6‘s Junhyeok failed as Jack Sparrow doppelgangers. SM himself, Lee Soo-man, attended his party as Zorro. Red Velvet‘s Seulgi made a mean Harley Quinn, while Seventeen’s Jeonghan portrayed a more laidback version of Harley in a black and red suit. Jeonghan was a perfect example of how to be subtle but effective with his styling.

While all this was going on, Krystal went ultra meta by dressing up as Tao — no, wait, she was Edie Sedgwick. Never mind… At least she was in good company with Kai‘s David Bowie.

And because I have have no idea where to tell you this: Heechul dressed up as Po AKA as the red Teletubby. 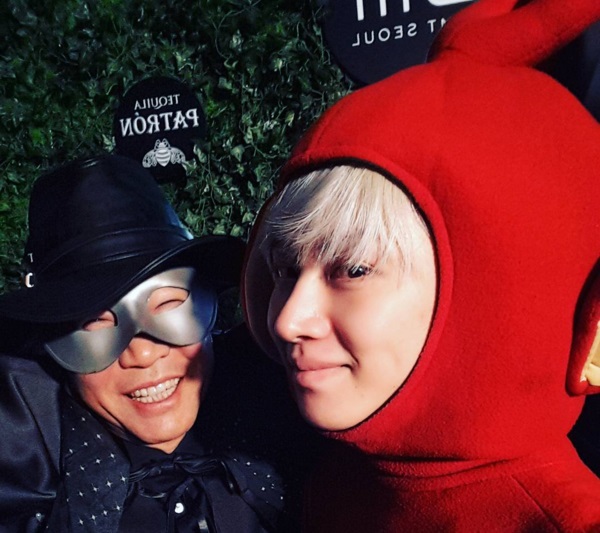 The other evergreen theme was anime: Jonghyun apparently confirmed his weeb status among Shawols with his third anime-inspired outfit. This year he was Inuyasha, though the differences in costume meant he had to tweet a clarification. It has to be said, that his previous costumes were more faithful to their source material.

One of Jonghyun’s previous Halloween avatars, Naruto, reappeared this year in the form of BTS’ Suga. His bandmate Jungkook was Detective Conan. Meanwhile, Changmin showed of his low sodium diet by dressing as One Piece‘s Ace; and Irene gave us a throwback to the ’80s character Arale Norimaki, from Dr. Slump and Dragon Ball (Irene dressed as the Dragon Ball version). Long-running series Bleach was also represented in Day6 singer Sungjin‘s shinigami.

Studio Ghibli didn’t get left out, either. Wendy won minds as Spirited Away‘s No Face; and Taemin won hearts as Howl of Howl’s Moving Castle, all because he had promised a fan he would do this months before. If someone happens to come into contact with him sometime in the next 12 months, could you ask Taemin about fulfilling our Pandava fancasting? Thanks!

And look, some of you may find Changmin’s ab flashing a but much; but Ace’s voice actor, Furukawa Toshio, approves. So:

Over to you, now: what were your favourite outfits from this year? 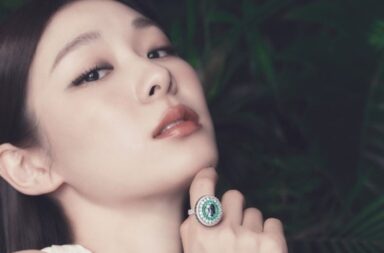