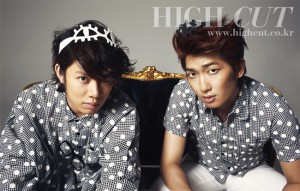 SM Entertainment continues to roll out the comebacks in the first quarter of 2015! Next up will be the return of cross-group unit M&D, made up of Super Junior‘s Heechul and Trax‘s Jungmo. Rumors of the unit’s return had been circulating since early this year, but on April 9 SM Entertainment made the comeback official with the release of a single teaser image and a promised release date of April 20.

The unlikely duo first debuted as a unit four years ago with the single “Close Ur Mouth.” M&D — an abbreviation of Midnight & Dawn — is undoubtedly SM’s most musically unanticipated unit, though Jungmo and Heechul are known friends. Pulling from Jungmo’s rock background and Heechul’s more pop flavor, the duo have one of the more unique colors in SM Entertainment.

This time, SM Entertainment has confirmed the group will return with their first mini album 가내수공업 (Cottage Industry). Music show promotions for the lead single “I Wish” and a second track are set to begin April 16. Keeping with SM’s recent trend of relinquishing creative control, it also appears that the duo participated a great deal in the preparations for this comeback, with both helping with lyric writing, music video direction and physical album design.

Much like the “Shut Ur Mouth” debut, this comeback is expected to be a star-studded affair. G-Friend member Yerin was spotted filming for the music video with a questionably styled Heechul at SM’s Coex Artium earlier this month — Kara‘s Hara and Sistar‘s Bora are also expected to participate in the comeback.

Between Super Junior D&E, Red Velvet and Exo promotions, SM sure is succeeding in dominating the music industry in 2015. Even if M&D’s music isn’t to your taste, it’s always exciting to see Trax members escape the SM basement.

Readers, are you excited for this comeback? What other units would you like to see make a return?