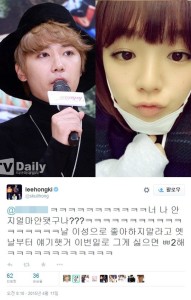 FT Island’s Lee Hong-ki got into some strife on April 12 when dating rumors surfaced about him and the Japanese model Ai Shinozaki. While his company, FNC Entertainment, quickly leaped to deny rumors stating that the two were just friends, Hong-ki took to twitter to address the matter further.

He replied to a ‘fan’s’ comment that condemned the possible relationship with a message that seemed to stun many.

“ㅋㅋㅋㅋㅋㅋㅋ You haven’t known me for that long, huh??? ㅋㅋㅋㅋㅋㅋㅋㅋㅋㅋ Don’t like me as someone of the opposite sex (boyfriend), I’ve said that for a while now. If you hate me for this, then bye ㅋㅋㅋㅋㅋㅋㅋㅋㅋㅋㅋㅋ”

He has since deleted that tweet, but the message is clear: he doesn’t care what his fans think of him dating. He hasn’t apologized for this incident either and there is probably little chance that he will in the future — not that he should. This seemed to turn quite a few eyes to this incident as this isn’t a very common direction for an idol to take. He was quickly labelled by netizens as immature and like a junior high student. However, was this action really immature and irresponsible for him to take?

While in some cultures, celebrities dating rumors are taken lightly, dating rumors are seen as serious business within the Korean entertainment industry. In some cases, it leads to harsh criticism and a possible drop in popularity with fans losing interest if the celebrity is really ‘off the market’. SNSD’s Taeyeon and EXO’s Baekhyun were outed and subsequently objected to the following media and fan circus. Taeyeon actually apologized to her fans at an airport. If that doesn’t strike you as wrong, then you might want to think again. Not just them, as Sulli’s dating scandal with Dynamic Duo’s Choiza lead to her taking a hiatus from the entertainment industry. There are so many examples — from Super Junior’s Sungmin to IU. In Hong-ki’s case, his response can ruin that relationship between fan and idol, subsequently losing FT Island fans. In that sense, this could be called an irresponsible move on Hong-ki’s part. 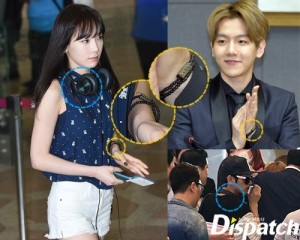 However, there has been a stark change in recent years with many idols coming forth and admitting they’re dating. SNSD’s Tiffany and Sooyoung admitted that they were seeing fellow celebrities in 2014. Though suffering some backlash, they have been pushed through and are generally accepted. These couples seem to be made up of older idols whose fans have been able to grow up and pursue relationships of their own.

That said, the question remains: are idols supposed to patiently wait for the approval of fans to date? I mean, what do most people wish for in their life? To date? To get married? For most people, this is a definite. So why deny someone else the same dreams?

However, this is what is encouraged, or at least not discouraged, in the K-pop sphere. K-pop is marketed on fantasy, further than just the alien, vampire and werewolf concepts, where fans are encouraged to create a emotional connection with artists, seeing them as their everything. This seems to equate in some people’s eyes to an imaginary contract where idols have to give up all prospects of a private life for their career and fans. As there is no written contract between fans and the musician not to date. For example, Got 7’s Jackson revealed he has a three year dating ban written into his contract on the variety show, Dating Alone, and we all know 2NE1’s Sandara Park and Park Bom are plagued by a dating ban even though they are both grown women in their late 20s. The control over dating has been institutionalized and made ‘normal’ in the eyes of most. Yet, does it make those that do not wish to participate in this different? 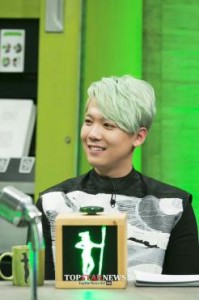 Hong-ki’s message is a reality check for all those fans out there that like him for those reasons. It also provides a hard line stance against fans who don’t like idols dating, especially when he told the fan that he was okay with him/her not being his fan anymore. It’s the implication that if you have a problem with your favorite idol dating, then you are the problem. Facing fans with indifference may seem rude and immature in the context of the idol industry; however, it is a very much needed response to these ridiculous attitudes. Ultimately, this incident doesn’t seemed to have deterred Hong-ki or FT Island with them rocking their recent comeback with the album, “I Will ”. So, why can Hong-ki get away with it without a massive dip to his popularity, while other idols would not?

Lee Hong-ki has built himself an image quite different from the ordinary idol, especially if his nail art obsessed rocker image is anything to go by. He has always been known to have a bit of a 4D personality, taking boundaries as just a drop in the ocean. FNC Entertainment’s CEO even admitted that Hong-ki has ‘acted out more’ in relation to dating. Hong-ki’s blunt honesty is a characteristic he has had from debut; he even stated on the variety program Witch Hunt that he didn’t care what other people think when he is dating. So after building up a personality that pushes the idol bubble, especially when it comes to dating, it really isn’t that surprising that he responded in such a way. In effect, it isn’t surprising that he can get away with saying these things either. As he pointed out, he doesn’t care if his fans don’t want him to date.

Super Junior’s Heechul mirrored Hong-ki’s attitude when he addressed the issue of dating  in his own unique way on the television program War of Worlds. He stated he told fans from his debut to not see him as their ‘everything’ and to live their lives. You know what? He says it worked too. Apparently, fans are now telling him to date, instead of sitting at home hugging his Anna from Frozen pillow. Heechul is an idol with a very unusual character; he is seen as SM Entertainments ‘free’ voice. He seems very much in charge of his own image and what he says. It is no wonder that he and Hong-ki are friends. 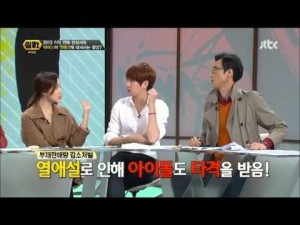 oth Hong-ki and Heechul are still considered idols, despite there deviation from the common stereotype. They have made it clear to their fans where the boundaries of their relationship lie. Despite neither having publicly confirmed a relationship, they are challenging the expectations of idols by showing that idols and fans can exist outside the fantasy ‘relationships’ that are created. By doing so, it further shows that idols can take back control over their personal lives from fans.

I think that it is better for idols and companies to take a hard stance against fans that only like them because they want to date them. YG Entertainment said it best when releasing a statement on the rumored relationship between G-Dragon and Kiko Muzuhara: ‘We tend to respect the privacy of our idols’. These small stands and dating reveals are necessary to change the attitudes towards idols dating. Who knows? Maybe we will have the K-pop version of Taylor Swift on our hands. After all, there is nothing wrong with dating lots of people as long as you’re not doing it at the same time, without consent.

What are your thoughts on idols dating, and Hong-ki’s management of the issue?