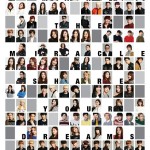 It’s a brand new year so what better way to celebrate it than to look back at the year-end Gayos that took place during the past week. Gayo Daejuns are probably the most anticipated stages of the year, aside from perhaps performances at MAMA, since they’re attended by the biggest names in the industry and feature a wide selection of special stages in which different artists form one-time collaborative performances. We’ve listed some of our favorite performances in our coverage of each gayo held by KBS and SBS and now we want to know: Which performances from the most recent sleigh of Gayo Daejuns did you enjoy the most?

Gaya: I enjoyed that backup dancer who hit Min in the face at the KBS Gayo. Not because he hit her in the face, but because he was so into the performance, and nothing was going to stop him from executing his moves, not even an idol’s face! That right there is dedication personified.

Miyoko: I’m pretty sure nothing is going to top the MFBTY collab stage for me. Not only did Tiger JK, Yoon Mirae, and Bizzy put out one of my favorite albums from this year, but their stage also pulled all the rappers I’ve been dying to see perform together, and then some: Eun Jiwon, Zico, Bang Yong-guk, Baro, and Rap Monster. It’s a dream come true.

Johnelle: I tend to be SBS biased when it comes to stages, so the SBS Gayo performances were among my faves. I agree with Miyoko that the MFBTY stage was great with the mix of the old school and the new generation of rappers. I also think the SBS stage for Exo‘s “Growl” was among the best because “Growl” really needs a circular stage to show off the choreography to its fullest and of course for the 360 views of Exo.

I also enjoyed B.A.P‘s stage of “One Shot” mostly because, for the first time ever, I feel like I haven’t seen them in a while and it was good seeing them. In addition, I really liked B1A4‘s stage of “What’s Happening?” because it was cute and fun, and my little niece loves them and was so excited to see them perform.  My favorite performance though was done by the ‘Bad Girls of K-pop, Lee Hyori and CL‘s collaboration performance.

Gabrielle: I’m with Johnelle with the Bad Girls of K-pop performance. I loved it. Great transition between “Miss Korea” and CL’s “Bad Girls,” and I just loved it. They seemed to really be into the performance and it made me like a song that I actually really disliked. I’d love to see them do something like that again. They rocked it.

Lindsay: Hands down, my favorite performance of the week was Shinee‘s Key and SNSD‘s Tiffany doing “Bang Bang” on MBC. It seems like Key was heavily affected by his time in “Bonnie and Clyde” because he is rocking that retro swing style. The song, the dancing, the outfits were all perfect. And on top of that, they both speak English well and likewise the lyrics of the song are completely understandable. There were a lot of excellent collaborations in these three shows, but this is my pick for the best.

I also enjoyed the circular stage performance of “Growl” that Johnelle mentioned. It had the closest feel to the camera work in the MV and I even liked the remixing and dance break. However, I am never going to understand Exo’s stylists’ obsession with using bandannas as loin-clothes.

Despite being mostly boring, I actually enjoyed a couple of the SBS performances too. I thought Beast did an excellent job on their “Shadow” stage, especially with their live singing. And I thought that Shinee’s remix of “Dream Girl” was excellently executed, not that I expected anything less of them, and I thought the rainbow suits matched the song and performance.

Nicholas: In defence of the KBS show, although it was the one with the thinnest set list, it was also the only one I could easily catch off TV, so here goes. Hands down, I had to give it to Yoo Hee-yeol for just being good music, as well as IU for being one of the few artistes who could overcome the microphone problems.

As for the crappiest one, without doubt it was Trouble Maker. Air-humping does not a sexy performance maketh. Miss A also deserve some brickbats for me with their version of “Hush;” surely they could’ve done more with such a promising introduction!

The best idea no one did? A 25 man version of “Sorry Sorry!” With all the promotion given to Exo, as well as how Exo are so capable at covering other groups, as shown by their version of “Everybody,” why not just have all the guys up on stage with their established seniors? That would give new meaning to the word scale.

Gaya: Seriously, that “Two Moons” stage was perfect thanks to the absence of Kris and Chanyeol. Any time we get to see Kai and Lay dance together is a good time for me.

Fannie: I came into this year expecting the most out of the SBS Gayo (based on previous years of viewing) but, surprisingly, I enjoyed the MBC Gayo the most this year.

My favorite part of SBS was Hoya‘s segment in the JYP special stage; the boy’s got some irresistable moves. From MBC, I really loved miss A’s “Hush” stage, the Hyori & MFBTY stage, and the ballad version of Shinee’s “Dream Girl” also provided some sweet relief that Henry Lau hasn’t completely been replaced by Lay as SM‘s resident piano slave.

Every single Kara stage was bittersweet to watch, especially the last one for MBC which more or less took us through all their career hits. I guess with 2014 already upon us, it really is the final goodbye to Kara as we knew it, which is kind of depressing but at least they got to say goodbye to their audience with a set of final performances as a group of five, which is more than what the Wonder Girls got.

Ambika: For me, this year’s sets seemed a bit lackluster overall. There were good stages, but something about it all spoke of not enough time to properly prepare and practice something that would be exciting. That being said, my favorite part from the KBS Gayo was Fei and Chan-sung‘s dance. It was a short segment, but it left a greater impression more than anything else in the show for me.

From SBS, I liked the CN Blue, Dok2, and Double K set that Johnelle mentioned. The members really got the crowd going with what seemed like a prerecorded performance or at least one in a separate room or something. Lim Chang-jung‘s “Open the Door” was also a favorite. Everything about that song and dance makes me laugh, so I’m glad it was performed.

My favorite performance from MBC Gayo would probably be B1A4’s pop rock version of “What’s Happening?” The group has a lively set of performers, but I liked the twist and energy they brought to this stage.