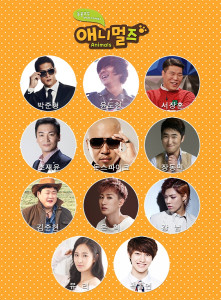 The cast consists of a nice balance between variety veterans and newer faces. Jang Dong-min and Kangnam in particular are currently considered trends in the area, while for members such as Seo Jang-hoon and the Kwak Dong-yeon, although they have previously appeared on TV programs, this will be their first fixed appearance. The latter, still a high schooler, is also the maknae of the cast, while Yuri will be the sole female member.

According to MBC, Animals will showcase celebrities and animals living together in an “animal town,” and effects of long term interactions between animals and humans. Although the broadcasting company boasts a fresh and unseen format, netizens are skeptical of the viability of the concept. The show will also be taking the highly competitive Sunday position of Dad! Where Are We Going?, and its first episode is scheduled to air on January 25.

Readers, are the any particular members you’re looking out for in the cast of Animals? What is your take on the concept of the show?