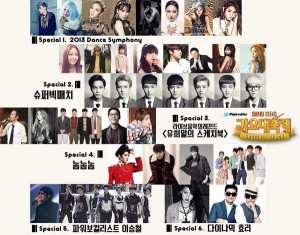 Friday’s KBS Gayo Daechukje kicked off the year-end music programs. Featuring the smallest list of attendees out of the three programs, the show was decked in different collaborations to fill the hours. This year’s line-up was better than last year’s, which was essentially a Music Bank special rather than a real year-end program. For the special stages, there were six different sets: (1) a ‘dance symphony’ with different pair-dancing routines; (2) a rival round where vocalists or dancers went head-to-head (in three different rounds); (3) a stage with Kim Yeon-woo, IU, Daybreak, Yoo Hee-yeol, and Shinee‘s Onew; (4) a Gag Concert special featuring 2pm‘s Taecyeon and Nichkhun and Shinee’s Min-ho; (5) a Lee Seung-chul performance with Infinite; and (6) a Lee Hyori and Dynamic Duo collaboration. Also present was a round of performances of songs from the ’90s.

Some stages hit the mark while others were only so-so. Honestly, if KBS had done more of those Gag Concert skits with rotating cameos, the program would have livened up much more. As it was, the program was riddled with strange audio and odd choices in camera work. The audio was especially a problem, with stages either sounding shaky or having a backtrack that was far too loud, making live singing useless. In addition, for several of the collaborative performances, there was a lack of real collaboration on stage, leaving them empty. As for the other performances, of songs from earlier in the year, they weren’t recreated in ways that worked well, and so had not come across as very worthy of marking the year-end special.

Nevertheless, below here are performances that I feel could be taken away from the night. Please comment with your favorites!

I’ve included this just for Bora’s part. I’d like to see her have an entire dance break to herself because I think she’s captivating enough as a dancer to do well in one.

This was Fei’s show, and Chansung might as well have been an unknown face dancing with her because I certainly wasn’t looking at him. With all the spins and steamy glances at the camera, Fei owned the performance right down to almost ditching Chansung once it was over. It was a great surprise to see her put some of her Dancing with the Stars background to use for the show because, oh right, she won her season.

I was expecting Ailee to work the stage, but Hyorin’s voice came right up with her. The two voices were a good match, with Hyorin’s coming across as more melodic and Ailee’s being more throaty. When strong vocalists sing alongside each other, you often get one overpowering the other, but this performance wasn’t case. Both girls committed to the sassy nature of the song, and the stage was one of the pleasures of the night.

A Pink‘s Eun-ji and Beast‘s Yo-seob: Jamie Foxx and Beyoncé‘s “When I First Saw You”

These two are clearly used to working with one another, and this performance was appealing to the ears. Mark called a subunit of these two Bubblemaker, and I’d be willing to hear more from them.

IU and Daybreak’s covers of Kim Kwang-jin‘s “Letter,” Toy‘s “That I Was Once By Your Side,” and Daybreak‘s “Got It Covered”

With few sound issues plaguing her performance, IU seemed to be one of the lucky ones of the night. Daybreak’s lead vocalist Lee Won-suk on the other hand, wasn’t so lucky with the audio. Despite these irregularities, IU and Daybreak sang a series of songs that delivered an unlikely catchiness that stood out during the night.

Of the ’90s stages, this was my favorite. It also helps that this was one of the better songs that they covered. The only thing I wish was for some sign of interaction between the performers.

From her vocals, down to her demeanor, this was probably one of Ailee’s own strongest performances of her song — even on this night of unsteady sound. The fact that she’s able to pass off a seemingly regular performance for a year-end special appearance, says a lot about her stage ability.

This stage was strange. I wouldn’t call it one of the best of the night, but it’s the kind of stage you hear about and need to see only once, if only to satisfy curiosity. Lee Hyori’s songs were essentially by herself while for Dynamic Duo, she took over the chorus. It was an oddly appealing change to the song — something you’d have to hear to even consider as okay or not — but definitely not an adjustment that I’d want to hear on the regular. Each part was okay on its own, but as a whole makes me worried for future hip-hop stages of her songs on MBC.