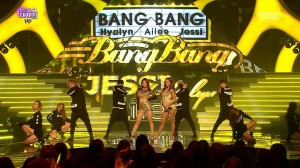 The 2014 MBC Gayo Daejun, or Korean Music Festival, marked the end of Gayo season, and quite literally the end of the year 2014 for K-pop (which might be a relief considering the drama that unfolded this past year). While the SBS Gayo Deajun struggled with sound issues, and the KBS Gayo Daejun struggled period, the MBC Gayo stole the spotlight for the second year in a row with dynamic special performances and a production that seemed to go off without a hitch.

The annual MBC Gayo Daejun has the advantage of taking place on New Year’s Eve, which does give the show a special flare. To top it off, the show was co-hosted by trendy idols Hyeri and Soyu along with Lee Yuri, Jeon Hyun-moo, and Kim Sung-joo. While Hyeri’s MC abilities remain questionable, she no doubt brought the touch of aegyo the audience and producers expected.

In lieu of awards, the MBC Gayo Daejun continued their format of white and blue teams, which perform ‘against’ one another with special stages in addition to group performances. Since the MBC Gayo comes last, a good majority of the performances this year were remixes of groups’ 2014 hits; and some of the remixes were better than others. The MBC Gayo Daejun also combined a variety of pre-recorded and live performances, which allowed groups like EXO to virtually be in two places at once to ring in the New Year. In the end, the Blue Team took the crown with the most viewer votes by the conclusion of the broadcast.

Ramblings aside, let’s take a look at the performances that truly set apart this year’s MBC Gayo Daejun from its counterparts.

HitMaker and Big Byung kicked off the music festival with the glorious “Stress Come On,” before GOT7 and BTS engaged in the first battle of the evening. Whoa man, did those two stages get the fan girls going. The special choreography, combined with the well executed camera work set the show off on a good, high energy foot. (But was the Limp Bizkit really necessary?)

On the White Team, MBC also brought back SM the Ballad‘s “Breath” with SNSD‘s Taeyeon and Shinee‘s Jonghyun. Their vocal colors match well in general, and accompanied with the stripped-down nature of the stage, the performance was short and sweet and not at all disappointing. (Anyone else notice how Jonghyun’s bow-tie matched Taeyeon’s dress?)

Veteran singer Hong Jin-young — who newer K-pop fans may recognize from her recent guest appearance on Roommate — graced the stage with the calm, but somehow uplifting “Cheer Up.” After all these years, the woman still has it, and it was refreshing to see her stage after a slew of high-energy dance performances.

CNBlue took the honor of being the first performance of 2015 with “Can’t Stop.” Block B‘s Zico added a rap verse to the track, making the collaboration stage even more enjoyable.

VIXX‘s studded black leather and freaky contacts certainly garnered attention with their performance of “Error” and its intense dance breakdown.

As mentioned, the MBC Gayo Daejun was littered with remixes of 2014 hits. Sistar‘s Soyu and Junggigo took the stage yet again with a jazzy rendition of “Some” that may have fit better in a dimly-lit jazz bar than a bright pink and blue stage.

SNSD also performed a “remix” of “Mr.Mr” — although I’m still struggling to find what qualifies the performance as a “remix” aside from the extended dance breakdown before the bridge. Something about SNSD in all black (a la “Run Devil Run”) is truly magical, even if the song is less than stellar.

2PM, instead of simply performing their 2014 hit “Go Crazy,” performed a hit medley featuring classics like “Hands Up,” and “Heartbeat.” Although, Taekyeon‘s red get-up (complete with a cane and top hat) was probably the highlight of the entire performance.

AOA brought back a hint of their band concept for a short performance of the classic “”Met You by Chance.” The group, sans Y, also performed a piano version of “Miniskirt”  before performing “Like a Cat.”

Taemin made his first Gayo appearance of 2014 to perform “Danger” and “Pretty Boy” (Featuring Kai of Exo). Even with all the complex dance moves, Taemin maintained pretty stable live vocals, with some help from the MR in the chorus.

SM, specifically Exo, was everywhere this Gayo season. Thankfully though, they mixed up their stages with the inclusion of various b-sides and special tracks in combination with the mandatory “Overdose.” For the MBC Gayo Daejun, the boys performed “Thunder” (live!) before segueing into “Overdose.” The “Thunder” choreography really was a wonderful way to begin 2015.

While Infinite and Exo have seen a lot of each other this awards season, their MBC special stage with L, Chanyeol and Baekhyun performing “Wedding Cake” was subtle and sweet and significantly better sound-wise than their SBS tribute stage. Plus, we got to see a lot of Chanyeol’s closed-eyes emotional guitar playing, which is always cute.

One of the dark horse special performances of the evening came from maknaes Joy (Red Velvet), Ha-young (A Pink) and Chanmi (AOA) who performed “Coming of Age Ceremony.” The concept and choreography removed the girls from their cutesy images and allowed them to showcase a sexy side many fans did not know they possessed.

Eunji  (A Pink) and Superstar K2 winner Huk Gak also impressed with a sweet performance of “Break Up to Make Up.”

MIB‘s Kangnam took to the stage with veteran singer Tae Jin-ah for the mandatory trot performance of the evening. At times, the fun performance seemed like a battle in and of itself as Kangnam and Tae Jin-ah engaged in fierce eye contact, alternating lines before dancing around the stage. If Kangnam’s M.I.B career doesn’t work out, he certainly has a place in variety and potentially trot.

One of the stranger special stages was made up of boy groups Boyfriend and BTS, who performed “We are the Future” and “Turn Around and Look at Me” in taekwondo uniforms. The martial arts component was impressive, although slightly confusing given the song choices.

Almost hands down, the special stage of the evening goes to Ailee, Hyorin and Jessica Ho who covered the 2014 hit, “Bang Bang.” Not only was the song a perfect choice for the three vocalists, but the accompanying set was impressive and clean. If there were an MVP award for 2014 Gayo performances, it would go to Ailee, as she managed to slay every stage (and Ariana Grande track) given to her between the three Gayos.

Overall, the stages were clean, the collaborations impressive and unique. MBC managed to make their Gayo Daejun fun and exciting despite being last in the Gayo line-up. And nothing beats being wished a Happy New Year by Nichkhyun and Taecyeon with a fake moustache.

Readers who tuned in (or caught performances the next morning), did you have a favorite stage? Which Gayo was your favorite in 2014?