Is Infinite Falling With "Man In Love?"

It’s been easy to forget that Infinite hasn’t come back in almost a year; Sung-gyu and Infinite H‘s first mini-albums have filled that gap very nicely. But, more Infinite is never an unwelcome prospect, and Woollim‘s boys are back with their 4th EP New Challenge, lead by title track “Man In Love” (AKA “A Man In Love”).

After the melancholic trio of “Be Mine,” “Paradise,” and “The Chaser,” a lighter release was much-needed. “Man In Love” is that release, replete with sunshine, smiles and lots of cuteness. For newer fans of the group, “Man In Love” is a chance to become acquainted with a side of Infinite that had been before showcased in “She’s Back” and “Nothing’s Over,” as well as Christmas single “Lately.” The track has served the group well so far, having just had their first music show win for the year on SBS’ Inkigayo.

However, as much as “Man In Love” is familiar, there are parts which stand out… and not necessarily for the right reasons.

As a song, “Man In Love” has that unmistakable Infinite sound, that percussion-driven ’80s feel. However, it is too aggressive for this kind of song and makes for uncomfortable listening. The verses feel sparse and the members’ voices harsh at times, while the drumbeat threatens to overwhelm the rest of the song — honestly, at one point it felt like my eardrums felt like flogging stones at a dhobi ghat. Overall, it doesn’t sound as melodic as it could be, especially for the bright and sunny concept with which it is paired.

Infinite MVs, a lot of the time, use visuals to enhance the emotions of the song, conveying its message through aesthetics and not narrative. With “The Chaser,” no one really knew what was going on — there was light smashing, perpetual car-rolling, a key, a box and very few clues on how the viewer was to piece it all together. The plot is rarely the focus… something which can be said for most MVs. However, “Man In Love’s” overall narrative is a straightforward visualisation of the song; of how a man would show his love. Each member has his own way to display his affections:

Sung-jong finds a gift box outside his door — with a live cat inside. Instead of questioning the suspicious lack of breathing holes in the box, however, Sung-jong instead uses his new-found pet to procrastinate, putting off getting ready for a meeting with his love until kitty provides some fashion advice. Hurrah! Our maknae is now appropriately attired to steal hearts — thanks, stylist cat! 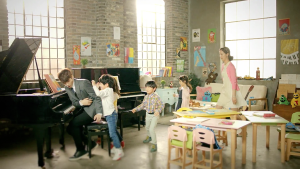 … or perhaps it was teaching a piano lesson that Sung-jong was trying to put off, which is kind of cruel because Woo-hyun could use all the help he can get. Though this day-care centre seems perfectly fine with allowing random people onto their premises, it draws the line at Woo-hyun’s apparently terrible playing, at which point the children riot. Woo-hyun finds a solution in practising after hours, though (why didn’t this occur to him earlier?) and deciding to present a giant teddy bear in lieu of a serenade.

Physics student L cannot seem to concentrate in class thanks to his extracurricular texting, and after being admonished for his distracted behaviour, he does what any sensible uni student would and ditch class. Unfortunately, this doesn’t stop him from seeing love hearts everywhere, and we leave him smiling alone in the middle of campus.

Dong-woo hits the books for some inspiration. The gaining of knowledge literally takes him to a higher place — the MV opens with him climbing up stairs, followed by a study session in his stairwell-library, before finishing up on the building’s roof.

Sung-yeol (who is sporting some really nice hair here) has wisely deduced that the best route to the heart is through the stomach, and thus heads to the kitchen to start baking. Despite getting flour everywhere, Sung-yeol manages to successfully make a batch of fortune cookies, each with a little love note inside. All together now — aawwww. 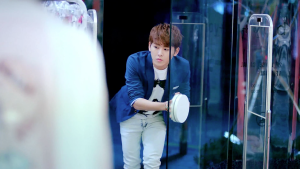 The first of my two favourite storylines sees Hoya‘s hesitant foray into consumerism as he tries to pick out a gift for his special someone. While the gender-based stereotypes related to shopping make this storyline rather trite, it’s saved by Hoya’s comedic asides as he tries to pick out a gift. The quick-cut editing featured here to match with the pace of Hoya’s rap also adds to the humour, allowing the jokes to be seen but not lingered on for too long. Though almost driven to frustration, Hoya eventually manages to find a suitable gift of a necklace.

And lastly, Sung-gyu spends the day gathering mysterious supplies; these are revealed to be light bulbs which he uses to create a pretty light display atop a building. The lights look lovely against the night sky, and makes for the perfect visual to go along with the song’s climax.

Another cute touch was how the members popped in and out of each others’ scenes. Dong-woo walks past the door to Sung-jong’s apartment; Woo-hyun finds Sung-yeol playing at his piano, and Sung-gyu gives an oblivious L a very judging look as they cross paths. Infinite’s MVs are always good at creating a particular ambience, and little details like this are a part of that.

Infinite, as we all know, are a group known for their dance; and while “Man In Love” sticks to the expected style, there are no real stand-out moves. In fact, some moves even seemed like Super Junior‘s usual dance sequence after the middle-eight — as seen in “Man In Love” during it’s own middle-eight. Leaving some of the more difficult moves to dancers Hoya and Dong-woo, while practical, was also a confusing tactic; seeing all seven members work together to pull off a certain move perfectly is one of the biggest appeals of Infinite, and that is just not here. There is unity, but not the high level of cohesion we’re used to seeing from the group. 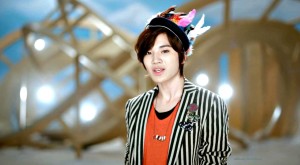 Something else which further detracts from said cohesion is the styling. Though not completely matching, Infinite’s performance outfits have always followed a set theme. But the theme here seems to have been “hot mess;” though some of the outfits work well — L’s green suit and Dong-woo’s black-and-white suit come to mind — the overall effect was loud, more akin to what we might see (and have seen) on SHINee than Infinite. Also, someone needs to get that monstrosity off Sung-jong’s head. I’ve seen more than enough questionable feathered head-gear to last me a lifetime, Woollim, and I don’t need more, especially from K-pop. That is not cute. Nor were the familiar dance sets and the random flare lenses. On the upside, everyone’s hair looked great (especially Sung-yeol’s).

Though it’s great to see Infinite trying out different things, “Man In Love” didn’t capture attention in the way their earlier releases have, earning the MV a 2.7 out of 5. But still, I must congratulate Infinite on one thing — taking out a music show prize for a less-than-stellar song. This is a definite sign of growing popularity, so well done Infinite, you are moving up in idoldom.

Readers, what did you think of “Man In Love?” Which was your favourite storyline? And which performance outfit did you like the best? Leave your comments and more below!