Infinitized: The Chaser of None

Adding to the plethora of comebacks and debuts, Infinite has returned with their new album, Infinitize, and the music video for their title track, “The Chaser.” It’s hard to imagine that Infinite will only be celebrating their second anniversary since debut next month. They are one of the most impressive of the newer idol bands and are definitely climbing their way up in the idol rankings.  A good portion of my day was spent analyzing the MV and agonizing over the perfection that is Infinite.

The music video opens with their intro track, “Infinitize,” a key flying up into Sung-gyu’s palm, and Myung-soo rolling like a buffalo in a car, which he continues to do throughout the music video, creating hilarity. At about 0:52, the intro ends and the actual song, “The Chaser,” begins. The song itself is good – loud, brash, and dramatic, but still good. It fits very nicely with the action-filled, fast-paced video. “The Chaser” opens with choreography that is so very Infinite. The flawless, swaying, mirror-like dance is reminiscent of their old choreographies, but still entertaining to watch. The dancing focuses a lot on arm movements with the boys constantly gesturing, waving, pushing, and posing their arms almost in a ballet-like way. The boys themselves look gorgeous as they twirl about, their solemnity oddly fitting with the cool aesthetics of the music video and seriousness of the lyrics. No flirty winks or cheeky smiles–everything about their performance is meant to convey a level of directness and intensity.

When first watching the music video, everything seems very random and nonsensical. Myung-soo hazardously rolls about in a car (how does the car keep rolling? Where is the momentum?), Dong-woo smashing lights on his bike, Sung-gyu in a field, Sung-yeol also on a bike and then in a mirrored room, and the others standing about in rooms as well. It makes no sense–why are they doing these things? How does this music video 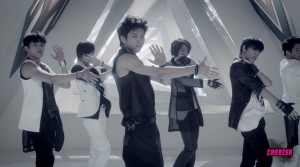 correlate to the song? It turns out that the music video contains a heavy amount of symbolism, all having to do with the song.

“The Chaser” is about a boy that refuses to let go of his old girlfriend, continuing to pursue her and promising to protect her despite her wanting to leave him. The boy “chases” after the girl,which is conveyed here by having the members of Infinite appear to be chasing someone throughout the MV. No girl actually appears in the MV, leaving this all up to interpretation. Knowing this,he music video almost makes sense, but continues to raise unanswered questions: the purpose of the key and the box at the end, why Dong-woo is smashing lights, the mirrored room, and why Myung-soo is rolling in a car nonstop. The boy’s actions can best be interpreted to represent the subject of the song’s inner turmoil. Myung-soo’s tumbling car represents the subject’s uncontrollable nature, how he’s unable to control his love for the girl and continues to pursue her. The light-smashing may also symbolize this loss of control. The mirrored room signifies reflection, the speaker realizing his obsessive nature. The box is most likely the girl’s heart with the key being the “key” to unlocking it. At the end of the video, the box remains unopened, showing the futility of the subject’s actions. 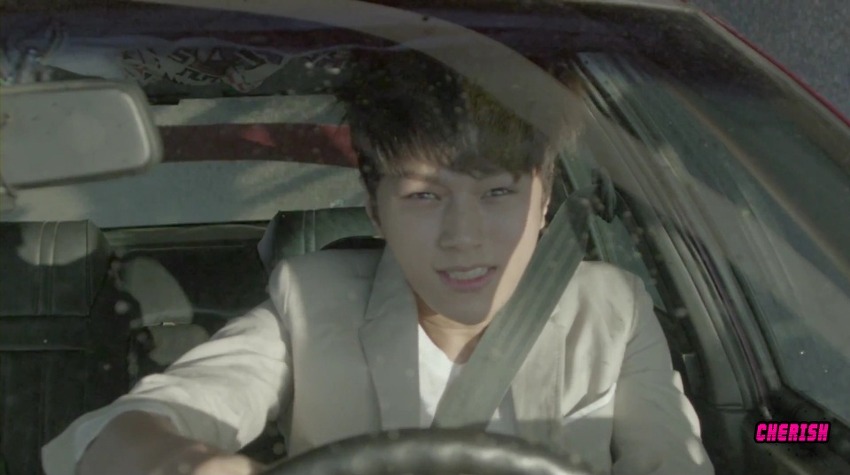 The level of symbolism in the music video is astounding, to the point that it’s a bit over-wrought, especially for a video and song that doesn’t make a political or social statement. You can only really spot the plot if you look for it and analyze the MV, otherwise it makes no sense at all. However, compared to countless other music videos that only provide simple, cheap entertainment with pretty visuals and fun dancing, the complexity of “The Chaser” is refreshing. And it is fun to watch Myung-soo roll about in his car.

Intellectual factors aside, the aesthetics were stunning. The entire video was in muted tones and all the scenes were shot beautifully, capturing 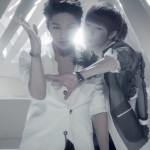 the interesting set, key points of the choreography, and of course, the boys’ pretty faces. The fashion comprised of black, white, and steel blue with the boys wearing blazers like always. And for some reason odd, sheer skirt-things. The hairstyling and makeup is fantastic–I’ve never seen Infinite look so good. Personally, I prefer Myung-soo with longer hair, but he looks good regardless. Maknae Sung-jong looks especially gorgeous with his emo-fringe and eyeliner and Sung-yeol also impresses during his little modeling scene at the beginning, doing a little disco move and strutting.

In contrast to Infinite’s previous music videos, Sung-jong and Sung-yeol got a surprising amount of screen time and lines, whereas other members, namely Woo-hyun, hardly got any. It also felt like I was seeing and hearing Sung-gyu most of the time. I would’ve liked to hear and see more of Dong-woo and Woo-hyun, too. Compared to their previous works, this music video doesn’t display much difference. It’s very, very familiar. The dancing, the styling, the aesthetics–they don’t show any progress for Infinite’s growth as idols.

The primary downfalls of “The Chaser” are its lack of uniqueness in composition when compared to other Infinite MVs and an overly convoluted plot. In terms of visual appeal, performance, and creativity, it’s wonderful: stunning to look at, fun to watch, and an inventive way to express the song. The boys sell the song well with their delivery of the dance and lyrics, displaying the seriousness the song requires. Even the small amount of acting they do isn’t shabby. However, the plot is buried beneath odd imagery and symbolism, making it confusing and even laughable at times. Also, because the MV bears a striking resemblance to Infinite’s past works, it doesn’t show Infinite’s progress or ingenuity. It does fit within Infinite’s image — everything about it screams “Infinite,” but it doesn’t show much growth for the group.