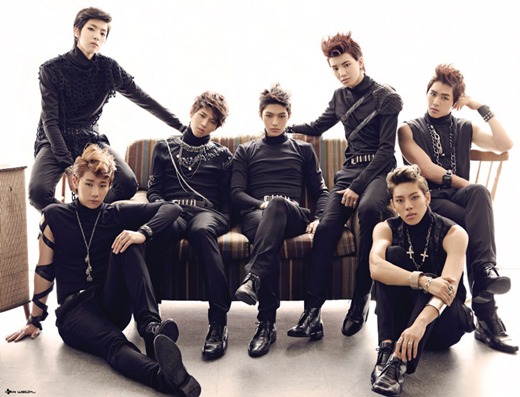 On September 26th, INFINITE released the repackaged version of their album Be Mine, Paradise.  Be Mine was the up and coming group’s first full length album and it was also their most successful effort.  The album peaked on the Gaon Charts at #10 and it’s title track “Be Mine” finally garnered them a first place win on Mnet’s M!Countdown.  Paradise is INFINITE’s thank you to fans before they focus on their Japanese promotions, is it a worthy method of appreciation?

Paradise has thirteen tracks, the original ten tracks from Be Mine: 01. Over The Top, 02. 내꺼하자 (Be Mine), 05. 3분의 1 (1/3), 06. Tic Toc, 07. Julia, 08. Because (Sung-gyu Solo), 09. 시간아 (Time- Woohyun Solo), 10. Amazing, 11. Crying (Feat. Baby soul), and 12. Real Story.  The three new tracks are: 03. 파라다이스 (Paradise), 04. Cover Girl, and 13. 내꺼하자 (Be Mine- Remix Ver.). “Paradise” is a nice mid tempo song- it’s not a dance track or a slow love song so seeing how they perform the song live will be interesting.  I like the funky little synthesizer line in the verses, the orchestration in the chorus, and the little guitar riffs thrown in as well as their great vocals.  I’m not a fan of “Cover Girl,” the opening rap was awkward and there’s a sort of dissonance in the music.  There’s also a problem with the mixing in my opinion, it’s not as crisp and clean as INFINITE’s songs usually are which is a problem I noticed in a few tracks in the Be Mine album also.  The “Be Mine” remix wasn’t disappointing, but wasn’t anything spectacular either.

The MV for the title track “Paradise” was released shortly after the release of the album.  Through teaser pictures of the INFINITE members that were released leading up to the release of the album, we knew that they were going for a darker, manlier, and more sophisticated look… well, either that or Edward Scissorhands.  The MV is dark and brooding with even the day scenes of the girl mired in shadows and kind of creepy.  Check out the MV.

The lyrics of the song tell of a failed/failing relationship where being together was almost like being imprisoned, and while being together is a paradise for one, it’s totally not for the other.  I like the song, it is something different and changes it up a little in terms of musicality.  INFINITE always turns out solid MVs and while “Paradise” isn’t my fave MV of theirs, it’s a good MV.  The cinematography is great and I like the transition of the shots between the house and the train. The boys look good in their black suits and it shows their growth as Kpop artists after debuting a little over a year ago.  My only critique would be with the styling of some of the boys’ hair.   I know they were trying to make them look older, but some of their hairstyles- Sung-jong, Sung-gyu, and Hoya‘s in particular, were horrible.

I’m always kind of leery of repackaged albums because it always seems like a gimmicky way for artists to make money off of their fans.  You know, slap on a couple of extra tracks that you cut from the original release, take some new pictures, and voilà… new album.  And although I do feel that ‘repackaged’ albums are a cheap way to release a ‘new’ album, I have bought some of them myself.  I will say though, that a lot of the time repackaged albums tend to be better than the original album that they were ‘repackaged’ from so I usually just buy the repackaged album.  I’m an INFINITE fan, I think they work hard, are talented, and put out some great songs, MVs, and live performances- and I’m glad that they are finally getting some of the recognition they deserve.  Paradise, while not a perfect paradise found, is definitely on my list of albums to buy.