Girl’s Day is one of the more divisive groups currently active in K-pop. While they have a loyal and devoted fan base, they also have large numbers of detractors. Some dislike them for the aegyo-infused concepts of their more well-known singles, and still others have strong dislike for the variety antics of main vocalist Minah.

On March 14, Girl’s Day released their expansive 14-track début studio album.  Containing a mix of hit singles and new tracks as well as a remix of “Don’t Let Your Eyes Wander,” the album shows considerable musical growth.  Though far from a perfect first effort, Expectation shows that managing company Dream Tea Entertainment is now willing to take risks (even if they aren’t yet quite sure what they are doing). 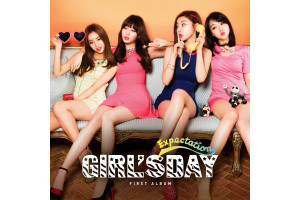 “Girl’s Day World” leads off the album. Combining peppy drum beats with sultry singing, the track conveys the evolution of Girl’s Day to a more mature group. With their intro, they follow the suit of many K-pop groups by boasting about their potential, though it’s a bit disappointing to hear that boils down to what wonderful girlfriends they would all make. The harmonies are rich, harkening back to the mid-1990s girl group R&B heyday, sans the girl power.

“Expectation” is the lead single on the album, which showcases the sexy style that characterizes this album (at least compared to earlier releases).  While there’s no need to sound (er..pound?) the plagiarism alarm, the instrumentals have a well-trod beat structure that harkens back to several Western hits.  K-pop songs have the reputation of being hook-heavy, with the rest of the song simply existing to fill time between the hooks, sub-hooks, and post-hook hooks. Surprisingly here, the filler is ultimately more interesting than the hooks or the chorus. The verses and bridge are packed with syncopated rhythms and dynamic singing, all building up to a chorus that’s 90% “Ooohs.”  It really sounds like the producers exerted themselves writing the verses, then ran out of time before they could finish the chorus.  It’s a shame, especially given the magic that happens after the middle eights, where beautiful harmonies and a high energy beat help this song finish strong. One other thing I really liked about “Expectation” is the restraint the producers showed on using autotune.  This track could have easily followed the trend and been even more modulated and processed.  While the sound isn’t unique, this stylistic choice saved “Expectation” from being utterly unrecognizable from more than a dozen similar sounding songs.

“Don’t Mind” is one of those rare ballads that finds the right balance of warmth and ethereal, breathy vocals.  It’s also one of the few K-pop ballads where the performers are listed as the lyricists.  The voices just melt like chocolate as the members describe a moonlit date.  The instrumentals are guitar driven, which help gives this track a different sound from the more synth-driven ballads.  My only complaint would be the occasional modulation of the vocals during the harmonies. It detracts from the lightweight, elegant construction of the rest of the song and gives the wrong impression about the member’s vocal abilities.  Gregg Pagani, the producer behind the lyrics, hasn’t ventured into K-pop much before, but I’m certainly hoping that he decides to stick around. “Don’t Mind” is easily the stand-out track on the album. 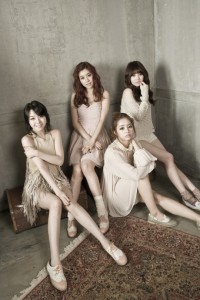 “Easy Go” decided to save us reviewers from abusing our slash key when placing tracks into genres, delivering a pure dance track.  With short repetitive English phrases and addictive dance beat, the producers have clearly drawn inspiration from T-ara.  The minor key tonality and the minimal use of blending in the verses, however, saves “Easy Go” from being a “Roly Poly” clone.  The rap sections, which as few and far between on this album, were particularly well-executed during this song, despite it clearly not being one of the group’s strengths.  Sandwiched between two slower tracks, “Easy Go” shows the breadth of “Girl’s Day” and keeps the album from dragging in the middle. It’s an infinitely listenable tracks, even if it is a little outside of their speciality.

After hearing this track, I’m a little surprised that this wasn’t the lead single for the album.  It has the standard construction of K-pop hits, complete with hooks, distinct rap sections, and an unobtrusive instrumental section.  The chorus is strong, and the post-chorus is stronger, and the “nananana” hook in the break was a welcome, retro-fueled addition.  That said, I’m not a huge fan of this song.  It a fairly standard electropop track, devoid of much character.  There’s ultimately nothing wrong with “Don’t Trust Her” but it seems like a paint-by-numbers track. 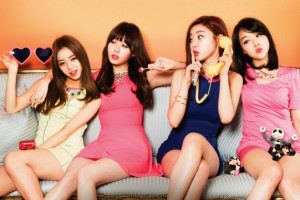 “White Day” was, ironically, the new track on this album that was not released on White Day.  That’s easily the most interesting thing about both the song and it’s video, by the way.  The dynamism is so lacking that you can skip minutes ahead or behind in the song and not interrupt the musical flow.  The “single drop of water” sound is poorly layered within the percussion, and distracts from the smooth feel of the song. Once you hear it, focusing on anything else becomes nearly impossible.  The vocals are fine, the harmonies lovely, but while Sojin and Minah have grown as vocalists, they aren’t quite ready for a vocal showcase track.  Furthermore, Yura and Hyeri are given even less to do during the song than normal. “White Day” becomes a perfect example of the trainwrecks that can emerge when a promising group is mismanaged.

“Oh Great” is a positive upbeat ballad that uses the contrast between clear vocals and fuzzy harmonies to construct a successful, if ultimately non-descript song. It’s starts as genuinely unremarkable, but improves as the song goes on, picking up speed and adding complex instrumentation and unexpected rap sections. The bridge and immediately ensuing key change allow this song to end on an exceptionally strong note. The story mirrors this dynamism as it captures the moment where two shy people in love confirm their attraction for one another. It doesn’t have the hook-heavy structure to work as a single, but as an album track it stands out for its bright vocals and swelling sound.

Girl’s Day chose to arrange their album with new tracks at the beginning and a selection of old favorites at the end. While a common choice, listeners immediately notice the shift in sound at the tail end of the album.  “Twinkle Twinkle” “Don’t Forget Me” “Hug Me Once” and “Oh! My God” are the previously released singles, and while arguably catchier than anything else on the album, they show producers scared to deviate from a set sound or to let their members perform to their vocal abilities.  The biggest problem with “Hug Me Once” is its placement directly after “Twinkle Twinkle” on the album.  Listening to these songs one after another, it’s hard to see “Hug Me Once” as anything other than a messier version of their much-maligned previous single.  The 2012 track “Don’t Forget Me” definitely seems like a step in the right direction, but it suffers from messy instrumentals and a video that clung too closely to the cute concept. 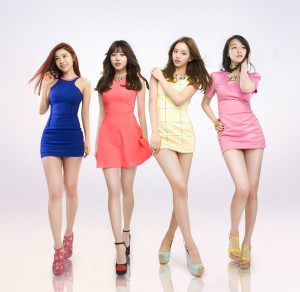 With Expectation, we hear the highlights of a group that hasn’t quite identified their signature sound and isn’t entirely sure how to go forward. We hear tracks like “Expectation” which are marketable yet unremarkable, tracks like “Oh Great” which are lovely yet unmarketable, and otherwise redeemable tracks like “Twinkle Twinkle” that suffered from a poor visual interpretation of K-pop trends.  There’s no question that the group is talented, but there is still a sense that Dream Tea Entertainment is struggling to find the best outlet for that talent.

If there is a way forward, I’d say it’s by seeking help from others. The three stand-out tracks on the album were among the four not produced by the Nam Ki-Sang team.  Outside producers seem to be more skilled at galvanizing the member’s voices to produce high-quality album tracks, and I think with the right hooks they could finally find the strike of lightning and the success that has so far eluded them.