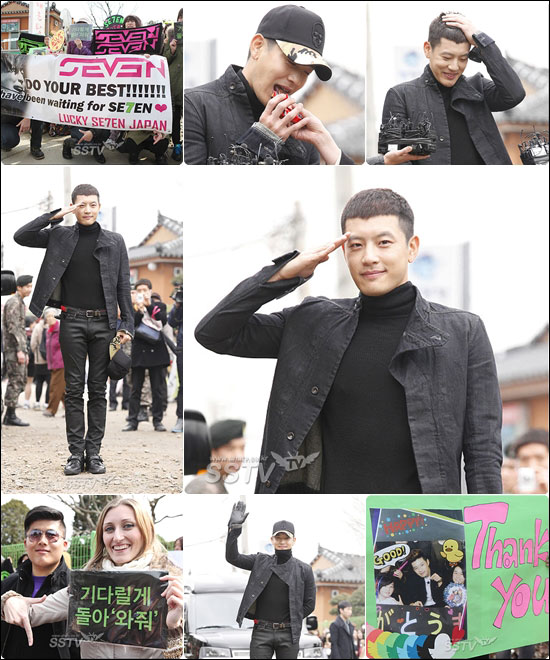 YG Entertainment‘s resident superstar sunbae Choi Dong-wook, better known as Se7en, has entered into his two years of military service. On March 19th, Se7en officially enlisted in the military and after 5 weeks of basic training will be serving at the Uijeongbu 306 Reserve for 21 months.

Se7en commented that he thought Yoo Seung-ho‘s secret enlistment was cool and felt sorry for a having a fuss about his enlistment. There were a few hundred fans and the media at Se7en’s send off, but none of his hoobaes from YGE because of safety concerns according to a statement form the agency.  Also missing from the farewell was Se7en’s long time girlfriend Park Han-byul, who is said to have been in China for filming.  Park Han-byul not being there is not unusual as many celebrity couples in the past have said their goodbyes in private rather than in front of the masses.  What was a little disturbing was that Se7en had said that they haven’t seen each other for a while… is a break up of one of K-pop’s cutest couples forthcoming?

Se7en debuted on March 8, 2003 with his debut album Just Listen. To celebrate his tenth anniversary in the industry, he held his Thank U concerts for fans in Japan and Korea.  He also uploaded the MV for the song “Thank You,” which has a montage of images of Se7en through the years, as one last gift for fans to tide them over for the next two years.

Best of luck to the soldier Choi Dong-wook, stay safe and healthy and serve your country well.