YouTube has become essential for musicians, especially amateur ones who achieve recognition through cover songs. In K-pop, there’s recently been a string of non-commercial, promotional cover songs on YouTube from idols, and bands in particular — i.e., the groups that play instruments. Far and away, the bands that have done the most are post-idols Lunafly and hybrid-genre group, LEDapple. Of course, professional musicians play covers all the time, but rarely as a sole means of promotion. These groups have the support of entertainment companies, and in theory don’t need to do covers for publicity.

Besides the general benefits of cover songs, in the K-pop world, covers on YouTube give groups the power to promote on their own terms, while still retaining the essential TV-like format of production. Fans are used to a deluge of TV appearances from their favorite idols, even when they’re not promoting a single. In order to do this, however, they need to fight for timeslots and conform to TV stations’ formats. We’ve looked at idols covering songs before, but in the case of Lunafly, LEDapple and other non-dance groups, the important point is the control, personalization and international reach afforded by the medium of YouTube.

Life is difficult for the idol band, as they traditionally have to “hand-sync” on music shows. It does feel unfair for bands, because while it can be time-consuming to lug and organize instruments, things like water on stage, pyrotechnics, confetti cannons and other safety hazards are no problem for dance-based groups. CNBlue fought to play live for their Re: BLUE promotion cycle, and while their “win” could signal a change for other bands, it might still be difficult for small groups with lesser industrial pull.

Enter YouTube. Every Tuesday since January, LEDapple has released a song — mainly cover songs — as part of their “Music Note” series. The official notes for these spell out LEDapple’s motivation:

“Through ‘Music Note’ […] they prove that they are a skilled band by showing off their vocals, and live performance skills that could not be easily found on broadcasting.”

In other words: “Hey, we’re a legit band that can legit play instruments, and TV shows won’t let us do that, so we’re doing it here.” LEDapple is fighting off accusations that other idol bands have faced: that they aren’t a real band. Specifically with LEDapple, a group that has gone through many member shifts, “Music Note” has shown their cohesiveness as a band. When LEDapple does promote on music shows again, they’ll do so with their own proof of talent, and it won’t be too glaring if they hand-sync on TV. 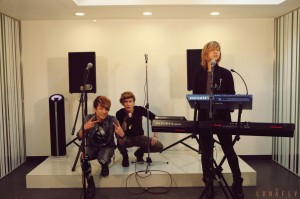 To push the “talent” idea a little further, it is ironic that cover songs, which musicians have historically rolled their eyes at as “unartistic,” become artistic and individualized in K-pop. We know that most groups do not write their own music, and that’s totally fine, given the amount of K-pop songs produced in a year, and the countless other talents idols display. However, cover songs are a way for idol bands to prove their chops not only through playing instruments, but also through rearranging songs. LEDapple has given One Direction’s “Kiss You” a punk edge, while Lunafly has brought an acoustic harmony to everything they’ve touched, showing the groups’ music styles.

The videos themselves are also an opportunity for creativity. If you watch LEDapple’s covers from first to last, you’ll notice a progression in filming technique. First off, they begin with home video-esque performances, showing that they can perform live. Then the videos take on a psuedo-music video quality, complete with storylines and scene cuts. However, an amateur feel is retained in the videography, which inspires emotional connectivity with the band’s members. This quality signifies LEDapple’s personal hand in crafting these videos, a distinction from material to come from an entertainment company. With song covers on YouTube, a “real band” image is enhanced; YouTube is essentially the garage band of the internet, and ‘raw’ covers like these drastically differ in tone from professional, stylized videos.

For bands like Lunafly that shun the K-pop way of promoting, cover songs offer the ability to continuously give fans material. From the beginning, they’ve uploaded covers of pop songs and played requests at concerts, which has contributed greatly to their substantial fanbase. Cover songs keep Lunafly in the search engine results, give fans what they want, while also buying time to write new material, without having to do delve into other entertainment avenues for appearances and promotions. Recently, they’ve opened an official USTREAM channel with the intention of broadcasting their bi-weekly show, Lunafly Music TV. By taking the band’s career path into their own hands, Lunafly has expanded on their small repertoire to find more channels of exposure; this has upped their chances of performing at concerts and carrying out other promotional activities.

One can’t ignore the appeal that these covers continue to have toward international fanbases. Both Lunafly and LEDapple have foreign members, and like all K-pop groups with foreign members, they are designed to appeal to a broader audience. Covering songs that are international hits makes it more likely that non-K-pop fans will find their music, and for some, in a familiar language. Lunafly has exclusively covered English-language songs, occasionally adding in Korean, though they’ve released both English and Korean versions of all their original songs. LEDapple does a mix of both English-language and K-pop covers, making it feel like the bands genuinely want to connect with both Korean and non-Korean fans.

There are other K-pop groups uploading covers to YouTube that don’t fall into the “idol band” category and do not speak English, but rather use covers to promote their vocals. JYP’s ballad duo 15& is currently releasing their “15& Sound” series, which covers past K-pop hits. Tritops, another vocal group that has had its fair share of organizational issues, recently received praise for their uploaded cover of SHINee’s “Dream Girl.” These cover songs give lesser-known groups the page hits they need to keep their careers buoyant.

There is one downside: legality. This is not a K-pop specific issue, but does affect channels that contain obvious home-made content. YouTube is a gray area when it comes to copyright infringement, but unless a group obtains the appropriate license — variable fees are applicable to the use of artists’ songs — video recording cover songs is illegal. Copyright holders don’t often kick up a fuss, but YouTube leaves it entirely up to the copyright holder. While these videos give groups control in terms of artistic style and content, there is always the possibility that they could be taken down by the YouTube legal team. In fact, very recently, LEDapple’s YouTube channel was momentarily suspended, due to what Starkim Entertainment called an “error.” They also replied to the copyright infringement issue saying that they “objected to the notification received for infringement of copyright and it has now been resolved without issues.” It’s difficult to say if this will happen again, but of course, the beauty of YouTube (and the wider interwebs) is that one can probably count on another member to share and re-upload the suspended videos.

These bands are not necessarily doing anything different in terms of promotional strategy, but the method and venues are different. This approach does offer new challenges and will in the long term, change their audience, but given who they are targeting (younger, tech-savvy and possibly cosmopolitan individuals) this is not a bad thing. Most importantly, these covers allow idol bands to show their musical talent, and give fans opportunities to interact with them on more personal levels; these are functions that only social sites (like YouTube and USTREAM) can provide.

What do you think of these covers, Seoulmates? Are there any favorites that we haven’t mentioned here? Personally, I’ve come to love BOB4’s sound — though their lack of a band YouTube page is frustrating. (Brownie points to those who can find all their covers.)

For more discussions about YouTube and the law, you can start at these places: Wired UK, How YouTube Thinks About Copyright