MR.MR's Debut: Who's What Girl?

On October 4th the band MR.MR, comprised of members Jin, Chang-jae, Tei, Do-yeon, and Ryu, released their debut MV, “Who’s That Girl.” The name MR.MR stands for the idea that they are “men among men,” and is also shared by a band from the 80’s – although that was Mr. Mister, technically. This name foreshadows their concept goal of being chic and manly.

The MV begins with an electronic beat, a shot of a sparkling chandelier, and then a shot of a stereo, blasting out the song’s beat. From there on out it is a fairly typical low-budget K-pop MV. The camera people have plenty of face shots of each member. This is an understandable move in a debut video since we aren’t familiar with the group yet and need to get to know their faces if we are going to become fans. These solo shots are interspersed with dance sequences which take place in a couple random, and rather stark, rooms. The rooms where the solo shots are taken aren’t as empty but they seem completely random. Here a bathroom, there a staircase, and here a room with a giant mirror? These sets, unfortunately, don’t add anything to the song or video. The lighting choices were also odd, ranging from strobe light to strange hanging light bulbs that got in the way of the singers’ faces. They probably would have been better off doing a more story-oriented video that followed the lyrics of trying to find out who exactly this sexy girl is.

The dancing, quite frankly, also isn’t anything special. For a video where being sexy is definitely part of the concept it felt like they could have done a lot more with the dance. There were hints of other K-pop dances showing up too, a Super Junior “Sorry Sorry” hand rub and a continued theme of lapel usage which hearkened back to Teen Top’s “No Perfume on You.” The difference between MR.MR’s jacket dance and Teen Top’s is that in “No Perfume on You” the lyrics are about smelling perfume and likewise a dance involving your shirt makes sense, but in a song like “Who’s That Girl” that has nothing to do with jacket lapels, well, the dance seems a bit odd. Speaking of the lyrics, they too, are nothing special. When considered together, the beat of the song and the lyrics make up a pretty typical pop song. No deep message, a lot of bass, and lots of the repeated question, “Who’s that girl?” 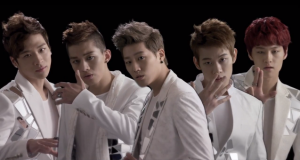 However, since we are always looking for something that stands out about debut groups, MR.MR has something; there isn’t a rap section in this song. Does this mean there isn’t a rapping member at all? It is fairly apparent from the song that these boys can sing well and thus the lack of rap in the debut is pointing towards MR.MR being a purely vocal focused group. This would set them apart from many other groups, but whether it would be in a good way or not is questionable. Many K-pop fans enjoy the rap break-downs in songs, but, on the other hand, sometimes these raps come across as more awkward than anything else and ruin a perfectly good song. If MR.MR sticks around for a bit, this point of interest would be something to keep an eye on. Another interesting point about this video is the outfits, or sometimes the lack thereof.

Along with showcasing their vocal abilities, these boys have chosen to showcase their chocolate abs and nipples. The two main outfits for the group shots of the MV are a white suit with what looks like chunks of mirror on the lapel, and a black suit for which the undershirt is entirely made of mesh. Overall, these outfits match up with the sexy, mature, manly concept. Suits are a safe choice for a new guy group as they are often used for MV and concert costuming in K-pop. However, the see through shirt is a little more daring. As far as gaining fans goes, a daring choice like this could be what makes it for them. It immediately played on the sexy factor which may keep any watcher who found the members attractive interested enough to look up more about MR.MR. A couple of the members also show off their stomachs completely shirtless, which also assures fans that these guys won’t disappoint when flashing some abs during a live performance. All in all, the outfits, 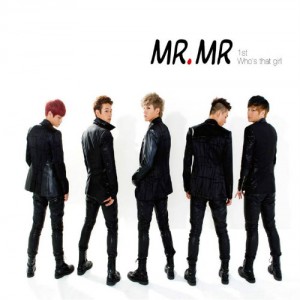 although not overly exciting, might be one of the better things about this MV.

Unfortunately, the song wasn’t catchy enough to stick in your head for long, the guys were attractive but not very unique, and the MV itself was unoriginal. That being said, MR.MR may still have potential as a vocal group. If they were to do a song more along the lines of TVXQ’s “Before U Go” instead of a song as boringly electronic as “Who’s That Girl” it could play more to their vocal ability and sexy bodies. Hopefully they will go in a direction like that for their next release instead.

What do you think Seoulmates, any interest in MR.MR?