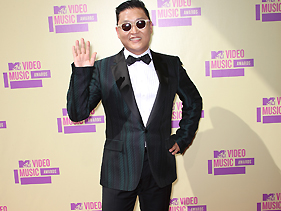 By now, everybody and their mother — and I mean that quite literally — has probably seen the masterful music video for South Korean rapper Psy‘s slightly subversive and uncommonly earworm-y hit “Gangnam Style.”  Everybody and their mother is likely also aware that Psy (known to his wife, kids, and the South Korean authorities as Park Jae-sang) has (1) recently signed a contract to join US record label Island Records under the management of Scooter Braun, who is manager to both songstress Carly Rae Jepsen and one Justin Bieber (maybe you’ve heard of him?), and (2) earned himself a VIP invitation to the well-attended and popularly viewed MTV Video Music Awards, at which he performed “Gangnam Style” alongside The Wanted.  Psy stood on the very same stage as did some of the most iconic musical artists in the world, including Rhianna, Nicki Minaj, Wiz Khalifa, One Direction, and Taylor Swift — and an appearance at the VMAs seems to be only the beginning of what could potentially be an extremely viable (and potentially lucrative) shot at breaking into the seemingly impenetrable US market.

It doesn’t need re-stating, but “Gangnam Style” has definitively turned Psy into an overnight viral sensation.  The song has earned extensive international media coverage, far more than has any other K-pop song, and has surpassed SNSD‘s “Gee” as the most viewed K-pop music video on Youtube (at the time of this writing, it’s resting comfortably at a cool 112 million hits).  A number of prominent American celebrities, from T-Pain to Tom Cruise, have Tweeted about it.  Even reputable publications like The Atlantic and The Washington Post have published pieces analyzing the song and its success.  For a K-pop act, this is more than one could have ever hoped for — and many followers of K-pop, both in South Korea and abroad, are downright reveling in Psy’s success, which can be seen as the culmination of years and years of effort (and probably millions of dollars) to finally get a Korean artist into the American spotlight. 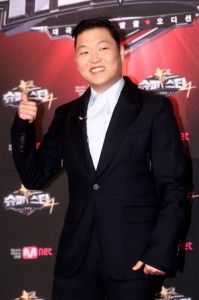 To be fair to Psy, he actually hits a surprising number of points on my own personal checklist for success abroad, one that I’ve been privately devising since my homegurls SNSD appeared on David Letterman last winter.  He was educated at both Boston University and Berklee College of Music and possesses a strong command of English, which is essential to any promotional career in an English-speaking country.  He knows music, knows the music industry, and is directly involved in both the creation and performance of his material — as in, he does what most K-pop stars can’t and writes his own songs.  Unlike a shocking number of K-pop stars, he’s also decently talented as a rapper and a performer — and ridiculously charismatic for someone with his physical attributes.  Psy has very nearly got the total package, and now that his foot is in the door, he’s in probably the best position possible to make some serious inroads into the world of Western music as a Korean artist.

But here’s the rub: Psy only got his foot in the door at all because “Gangnam Style” is gimmicky, plain and simple.  The music video is comical purely because Psy is a chubby Asian doing a stupid and easy-to-imitate horse dance, and the song caught on largely because the hook is partially in English and therefore easy to repeat.  Psy’s musical background, his talent, his witty lyrics blasting the ostentations and exceedingly opulent lifestyle of Seoul’s richest citizens, and his own self-deprecation are most likely of little import to a good chunk of the millions of people who’ve watched the music video on Youtube.  Psy’s acceptance by a predominantly American audience does not indicate a changing attitude towards Korean pop music, nor should it be misconstrued as one.  Psy’s victory is a victory for Psy and Psy alone — and not only does that victory come at the price of potentially being pigeon-holed into the role of chubby Asian gagman, it also holds very little promise for any other Korean music acts that hope to follow in his footsteps.

I admit that this is a harsh condemnation of what really is a milestone event — after all, it isn’t everyday that a K-pop icon makes it to the VMAs.  However, it is important to be realistic about what makes Psy appealing to an audience that, with the exception of a small percentage of viewers, has no familiarity whatsoever with K-pop — and quite frankly, it is hard not to notice that Psy isn’t exactly your typical K-pop celebrity or idol.  He’s not pretty, he’s not polished, and his music video isn’t a glittery, over-the-top spectacle featuring gorgeous, heavily made-up women, guyliner-sportin-yet-somehow-still-beastly men, a twenty-frame slow-motion release of a white dove, or anything like that.  Rather, “Gangnam Style” is funny to look at.  And that’s pretty much all there is to it.  Even for viewers who have no idea what is being said, the image of Psy doing his ridiculous horse dance in a tourist bus full of middle-aged Korean women is funny, as is the image of him doing his ridiculous horse dance on a speedboat, on a merry-go-round, and in a parking lot.  “Gangnam Style” doesn’t seem to take itself too seriously, and comes across as more of a hapless gag than a serious effort.  Perhaps this indicates that a lot of K-pop takes itself too seriously for an American audience, but whatever way you spin it, it is noteworthy that what comes across almost as a parody video is what stole the spotlight — and not a (poorly sung) English language version of a K-pop song crafted with US success in mind. 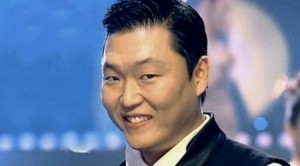 Is this assessment wrong?  It could be.  And I don’t doubt that a lot of curious listeners are clicking around Youtube as per the site’s recommendations for more K-pop-related content, which could lead them to some of K-pop’s more famous (and more typical) offerings.  But if the slapstick comedy of Psy is what brought them in, they’re unlikely to be satisfied with the rest of what K-pop has to offer.  Consider this: when I was in early high school, this video of a pudgy white man lip-syncing and dancing to a Romanian-language pop song called “Dragostea Din Tei” (originally sung by Moldovan band O-Zone) became one of the earliest viral Youtube sensations, and it ultimately led to this song that nobody could properly sing along to (save the “numa numa” part) being played at every subsequent school dance, party, karaoke room, and bar I went to.  One would probably have difficulty finding a young twenty-something-year-old who couldn’t identify the song or its origin.  But as popular as the song was and is (and I still hear it from time to time), Romanian-language pop music didn’t take suddenly take off in the USA, nor did O-Zone ever enjoy widespread popularity.  As it is with “Gangnam Style,” it was simply an insanely catchy song with an easy-to-imitate hook that was accompanied by a gimmicky music video (though admittedly not the original music video) featuring a somewhat unattractive man doing a a stupid dance.  And that’s the short and skinny of it.

Does this mean that Psy’s success is undeserved?  Not at all — after all, he was the creative mind that produced the video, however gimmicky, and wrote the song.  However, that “Gangnam Style” was the first music video to break the mold in the US doesn’t exactly inspire confidence in the rest of K-pop doing the same.  But maybe Kim Shin-young and Jung Ju-ri should start seriously thinking about becoming singers with an eye on the American market.  If gags and gimmicks are the best way to sell K-pop abroad, then the arbiters of the Korean Wave can and will likely be some of the most unexpected people in K-entertainment.