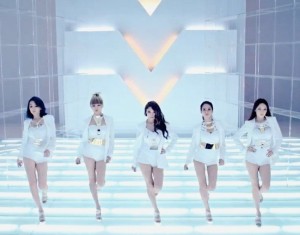 It’s been more than a year since Kara promoted with Step, which marks their last Korean release. The girls came back with Pandora, building up expectations with their claims of a more mature and feminine sound. On August 22nd, the girl-group held a live showcase to present the album to the public and their song is currently making its way through the music charts. So is this long-awaited comeback really worth the hype?

The album starts with “Way,” a fast-paced dance-pop track with Kara’s cutesy print all over. The girls harmonize well, as expected, although the decision to make it the introductory track is questionable. The song is catchy and energetic, but doesn’t stand out. It sounds like basic bubblegum pop, entertaining due to a bizarre combination of silly game sounds and an emotional violin.

The mismatching lyrics head a completely different way. They talk about loyalty and confronting hardships together with a beloved one, using a rich imagery to get the message across. Their dark approach contrasts with the upbeat, cheerful tone of the song:

Since the sun is watching over you,
I look at you in the moonlight as I hurt alone
Will you stay there? I will make you a gift and I won’t be too late
Even if I face a rain shower and my heart gets drenched
Even if I face rough winds and my heart freezes
I’m on the path to you, the path that leads to you – will you accept me?

“Pandora” impressed me right away. It begins with a slow build-up, only to hastily shift to a retro-sounding electro track. The synth-pop song is fast-paced, high-spirited and I love the guitar riffs, especially the moment where Nicole concludes her rap. The song is short and leaves no room to breathe, skipping incredibly fast from one part to another. The downside to such an engaging composition is that it gets tiresome and the layers of the melodic line don’t always fuse that well. At times, “Pandora” sounds disjointed and chaotic.

Hara and Ji-young’s rap is thankfully followed by Nicole’s, who finishes the rap break on a high note. The song takes then an abrupt slow-down, much like they did in “Step,” and while it’s still misplaced, it serves a good reminder to everyone on the Kara-can’t-sing bandwagon that some of these girls are talented. Kara sounds amazing here. Hara’s parts are well distributed and her voice keeps the mysterious allure of the track. Seungyeon finally stepped up her game and showed great improvement in the vocal department that could make her the vocal powerhouse of her group.

“Pandora” to me is the best I heard from Kara as a five-member group. It plays the group’s strengths, the producer is the same that took care of “Mister” and “Lupin” (Sweetune) which assures the consistency of their musical style, it’s catchy so it’s more than probable to seclude them a top spot for the music charts and it’s not as forgettable as their previous tracks. Plus, it’s actually different enough from their past songs and doesn’t run the risk of sounding too much like anything Kara has done, while still keeping a familiar image. They could have played the Pandora card better, since the legend is a potent inspirational source, but they did a good job overall. 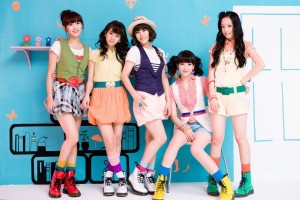 Compared to “Pandora,” the next track takes Kara a few steps back and puts them in their “Pretty” pastel-colored clothes. “Idiot” is about a love confession and it’s that type of feminine, sweet cuteness Kara used people to in their beginnings (again, as five). However, the song is messy and the girls sound like they’re struggling to keep up and hit the high notes. This is the weakling of the album: it’s not even mediocre, but downright bad. It’s insipid, boring, says nothing about Kara and looks as if nobody spent too much time on this track.

The last song on the album is “Miss You,” a ballad which incorporates the trumpet’s playful sound and piano notes in a jazzy-pop track. The Christmassy jingle bells make it sound like a sweet carol. The song is cute and is matched by the cheerful tone of the lyrics. The pre-chorus is the most entertaining part and the chorus concentrates all the energy of the girls into a joyful, but nostalgic verse about waiting for their lost love. “Miss You” fails to expose the girls’ vocals; they actually sound covered by the background track. The song is enjoyable, but it’s not distinctive enough and it’s easy to forget.

To sum up, the mini-album is weak. When I began listening to it, I thought “Way” was a filler and it will get better later. “Pandora” got my hopes up and it is indeed something Kara can be proud of. But then, after I got through the next tracks, I realized all the songs, with the exception of “Pandora” were fillers. The album has no sound on its own. There are three sweet songs, but have little to do with each other and the title track belongs 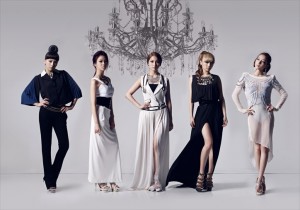 to a different album. Pandora’s main flaws are the obvious disconnection between the songs, the messy production and the overall incoherence in terms of musical style and image. I can’t say if Kara evolved or not; had they released “Pandora” as a single, I’d nod my head in approval. But “Idiot” begs to differ.

However, I look at Kara more as entertainers than singers and I live under the impression they love to work with their public. They went through many different image changes but there’s something about them that hasn’t suffered the slightest modification. All these concepts are mostly gimmicks they pull off for their relevancy, while their musical style keeps the same trajectory: their sound keeps evolving with small steps — and this is exactly what “Pandora” was about — while they release also tracks with a safer sound — like the rest of the album. These being said, my final rating for them is 3/5.

So what do you think of Kara’s Pandora? Was it worth the wait?