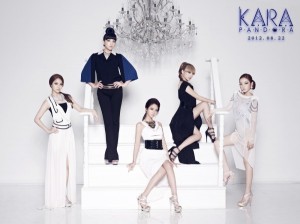 Almost one year after their last home effort with “Step,” Kara finally makes a Korean comeback with “Pandora.” This time channeling the old myth of Pandora’s Box as inspiration, the comeback promised a darker, more mature image for Kara, a group mainly known for their girl-next-door qualities. Before their actual comeback — complete with live showcase of the album — many were expecting a song much in vein of previous hit “Lupin,” which used the classic Sherlock Holmes antagonist as its muse and a much darker image for Kara.

What actually came out, however, was thankfully not a callback to “Lupin” as many feared. Yes, the song itself still contains the same elements that make Kara’s — or more specifically Kara’s main producer Sweetune‘s — signature sound; the dynamic synths, the energetic guitar riffs, and the generous usage of the hook are still present. But their new song “Pandora” has a different feel and sense that it doesn’t sound exactly like anything Kara’s done before. The synths have a more dramatic, sinister sound to them that goes well with the concept, the mood is much more urgent, and and the sound is more energetic, if not slightly chaotic at some moments. “Pandora” allows Kara to show new material to keep improving — which they definitely did this comeback; I haven’t heard the girls sound better — and yet still stay in comfortable territory where they work best.

The chaotic and climactic sound goes well with the dark theme of Pandora, and the girls vocals, as Maria described in her album review, have a mysterious yet alluring quality to them. That quality helps in allowing Kara to be portrayed as the temptresses that would be synonymous with the curiosity-killed-the-cat tale of Pandora. Furthermore, the song and its pacing has a very J-pop feel, fitting for Japan’s biggest K-pop group at the moment. 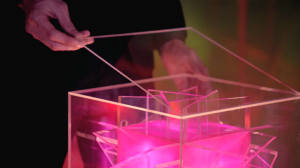 Similarly, the music video for the song is again, nothing Kara hasn’t done before, but the way the entire video is presented somewhat forgives that. The MV starts off with a lingering shot of a man uneasily contemplating whether he should open the box in front of him, symbolic of the titular item from the myth the song derived from. Fleeting shots are then shown of the MV’s main sets, which are presumably in the said box (meaning that we may actually have an MV where boxed scenes are actually justified through the story!), before the man slightly opens the box, waking the Kara girls and dramatically starting the video with the song’s hook.

Following that, the rest of the MV is basically standard fare, revolving between choreography scenes and individual ones. Each of of the girls had their own individual set along with two other sets dedicated for choreography scenes for the group to share, all being united through the futuristic elements. The first set showing all the girls started out unlit during the build-up of the song — saving a few choice gold flashes of light present in the entire MV — before lighting up, showing a red background. While the busy background did match the dramatic pacing of the song, at times, it became a bit too busy with its motion-filled lights that it distracted from the girls, the main attraction. 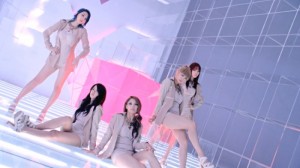 Furthermore, the gold lights, while complementing some of the solo shots almost like spotlights, ended up blurring others. The same critique can be made for the camerawork of the MV. The camera rarely lingered at one visual, instead flashing very quickly from one another, and while it followed the progression of the song fairly successfully, it also introduced some bad angles and again, distracted from the girls the whole MV is about.

The second group set was the one that took the box setting the most literally. While it was somewhat boring with its monochrome color palette, it worked slightly better as it better showcased the girls. It was also the setting for the middle-eight of the song, where the five girls are assembled poised next to the titular box, which emitted a pink hue that fittingly gave the room a warmer vibe during that quieter section. The individual scenes also added a bit more flavor in the MV. Hara and Jiyoung were in garage-like sets, and while the car and telephone booth respectively added in their scenes seemed like random additions, they added some color and helped with the futuristic feel the MV had. Nicole was in an oddly colored alley and Seungyeon was framed in a cylinder-shaped vent-like setting. Both sets really complemented the girls’ clothing and provided some pretty shots, but my favorite set would probably be leader Gyuri‘s. The green and yellow set was particularly notable and eyecatching in the video with its bright colors, and Gyuri’s purple outfit stood out from the set in a way that called more attention to her. 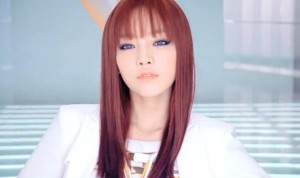 Other than the sets, the styling of the video was also gorgeous. All five of the girls looked stunning to say the least. Hara with her red hair and color contacts combo and Jiyoung with her blue hair looked especially attention-grabbing, and their looks worked with the futuristic feel of the video. There was an interesting fusion of futuristic and ancient elements that I felt worked, with the outfits appearing very modern, but the accessories and makeup adding an edgy ancient element as a callback to the myth the song uses as inspiration. The two influences combine to paint Kara as not only sexy, but exotic and alluring, which I imagine was the original intention of the stylists. My only critique would be the outfits in the second set of dance scenes looked way too short and a bit off, but otherwise, the rest of the styling of the video was a definite success.

As for the choreography, it wasn’t very technically-demanding and instead had a bit too much fanservice for my liking with the removal of the jackets and the abundance of hair flips. But regardless, there was a bunch of hand movements in the MV that managed to work with the theme without looking too gimmicky. The hypnosis-like spinning found during Seungyeon’s part of the first verseand Jiyoung’s series of reaching out hand movements in the second verse were favorites as they fit well with the theme of Pandora. 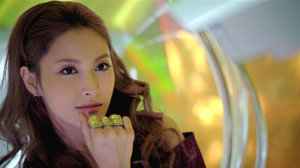 Overall a gorgeous, albeit slightly chaotic video, Kara doesn’t disappoint with this comeback. I only wish they explored the theme of Pandora’s Box a little bit more since there was a lot of potential with theme, a theme full of curiosity and consequence. But Kara just fails to channel it with this music video, which was too futuristic and bright to represent the old dark tale of Pandora, even with the exotic elements added. Even with the girls’ facial expressions, they could have told the story better. Sure they looked alluring and sexy throughout, but the lyrics have them as temptresses. Other than one particular look of Gyuri looking calculating and a satisfied look from Hara following the climax of the video when the box is fully opened, no other signal is really given of man and the box the MV revolves around.

Ultimately, while I mourn the missed opportunities of this MV, it doesn’t change that it’s still a great release for Kara. Rather than a callback to their series of “mature” comebacks with “Lupin,” “Jumping,” and “Speed Up” from their Japanese double A-side from this year, “Pandora” can only be seen as an evolution of their image and sound and a honing of their skills. Kara’s Pandora gets a 3.8/5 from me for some gorgeous visuals and unique styling, albeit some missed chances and distracting effects. What do you think, Seoulmates? Were you charmed by Kara’s “Pandora?” Or did your curiosity avoid their trap? As always, your opinions are widely encouraged!