Counterpoint: The Circumstances Maketh the Man

The Guerilla Date episode on August 18th started off rather innocently, as one of KBS’s regular segments where stars walked on the streets to “get closer” to the fans and get asked random questions. Near the end of the street interview segment, Beast’s Doojoon was presented with a challenge to piggyback a fan for ten seconds. 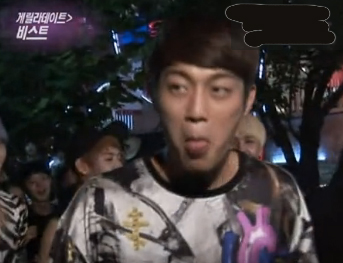 As my colleague Dana described in a recent article speculating about the incident and subsequent blame game, in what could have probably been the most orchestrated highlight of political in-correctness, the MC chose the largest girl in the crowd, much to Doojoon’s surprise. The face pretty much said it all. To the girl’s credit though, she did make a valiant attempt to avoid to avoid the joke being turned on herself, by offering to carry Doojoon, amidst the laughter and then later jokingly saying it was tough to carry him.

For most, their first reaction would be to call it another insensitive move by Cube Entertainment, especially after the Craigslist posting, which explicitly stated that “White models” were preferred for their music video shooting. It could also be argued that these two instances of open discrimination and insensitivity come across as ironic ironic too, given Cube’s push for international acceptance, as well as how commonly their acts  state intentions to (or tour) countries which other companies ignore.

So to not acknowledge that fans come in varied races and sizes, or at least push for ideal types in fans, is at best hypocritical. After all, it is not skin colour or weight that determines a fan’s loyalty and will

power to buy an act’s albums, or attend concerts.

However, interestingly, the fan community, as well as Korean media have not made such a play on this incident. Below are a few possible reasons why.

For one, it could be an issue of perspectives. Doojoon, having spent most of his formative years in a training academy, likely has spent much of his time being surrounded by good looking and pretty fellow trainees, hence the possible perception that fat or ugly people were just anomalies. Also, having seen many fellow trainees (or possibly himself) lose weight after a bout of dieting and quickly enough for debuting, or just in time for promotional activities, he might also have the impression that weight loss is surprisingly feasible for everybody and that it is not too much of a trouble.

Never mind that being selected to be an idol trainee also does entail above average looks, and that idol-dom is probably as far fetched from the real world as it gets. Where the temptation to eat conveniently, but unhealthily is far stronger, where we are not surrounded by trainers and dieticians 24/7 to give body maintaining advice, and where the idea of physical activity is more run in the park and taking stairs, less hours spent in the gym with treadmills and weight machines.

And most importantly, in the real world, we just do not really care about our weight or looks all too much, as long as we are pleased with the way we look, as well as being healthy at our current weight. 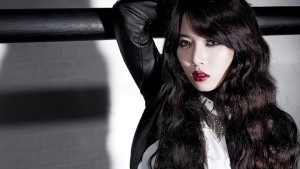 So in light of all that, maybe an idol having largely been in an environment of hot bodies, going out, seeing somebody not within his “ideal type” and having a culture shock at the other party’s expense was understandable, though still not forgivable.

His behaviour could also be viewed in light of how in Korean entertainment, as long as one does not have the “ideal type” characteristics of looking good and the gender specific characteristics (manly for males, feminine for females), the person is expected to play up those odder characteristics for laughs or be permanently made fun for those characteristics.

While guys do get such stick from time to time (witness Daesung and his good old “small eyes flat nose” jokes), females seem to get it far worse. At least for some guys , they can get their negative characteristics overlooked in light of the positive things they do in the public eye.

A good example is HaHa, who while not being famed for physical prowess or looks, is recognised for his glib tongue and ability to charm the socks off female guests (or others long enough to stay alive in a Running Man game). There are even some guys who are recognised for being the epitome of the anti-sexy common man, like Yoo Jae Suk and get plaudits for it.

Females on the other hand, always end up getting none of this recognition, and inevitably end up being known for their coarse girl or not ideal type acts. Think Kim Shin Young and her jibes about her size and weight, plus doing most dances in the form of a parody.

Or how about Shim Bong Sun, and her famously tough screen persona, which always involves verbal battles with guests? Or Jung Juri, with her famous “ugly faces” act?

In light of that, an MC pulling out a plus sized woman for the amusement of the camera could be viewed in Korean context as just fair fodder for entertainment, with Doojoon playing things up for laughs. As a telling sign , the females were notably more muted on their reactions, watching more quietly as the guys got their fair share of cheap thrills, judging from their laugher.

Taking all this into consideration, it could be understandable (though still not justifiable) that he could act in such an insensitive manner toward a fan. Add prevailing attitudes about gender imbalances (witness the muted reactions of the watching females) and usual circumstances which shaped his perceptions of physical beauty, and you have an incident which raised the heckles of international fans, but where local reaction has been a fair bit more muted.

Perversely, such counterpoints also made his actions very hard to judge on a fully right or wrong scale, instead being largely a grey area from my point of view. Despite me calling the behaviour for what it is, discriminatory and shallow, as well as mocking how obvious how defined their ideals of beauty were, judging from how Beast were more forthcoming with fan service for the prettier people, it would be hard to say whether my reaction would have been different if I were to be found in exactly the same circumstances as him, with the same environmental contexts he lived in.

To sum up, while we are quick to judge, we should also remember we come from a place where certain types of political incorrectness and insensitivity are far more frowned upon. Hopefully, in taking the chance to call out wrong behaviour, we should also recognise celebrities who go beyond their call of duty to speak out for positive actions, and recognise them for using their fame positively.

So Seoulmates, what are your takes on this? Do you believe that the circumstances make questionable actions justifiable, or that the right thing could (and should) be done?