Going Ghost with Arang and the Magistrate 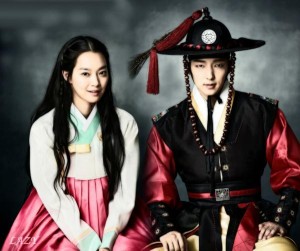 After a bit of nagging by a friend, I made the effort to watch Arang and the Magistrate, MBC‘s new drama replacing I Do, I Do. As one that watches dramas with considerably less frequency than keeping up-to-date with music, I hadn’t encountered leads Shin Min-ah or Lee Jun-ki in any previous dramas, so I didn’t know what to expect with their acting. Though my lack of encounters with Lee Jun-ki most likely had to do with his military stint that began right at the start of my immersion into K-pop. Familiar faces in the drama are Kim Kwang-gyu, who seems to excel at these minor roles in historical dramas, Yoo Seung-ho, with a rather glorious length of hair as the Jade Emperor, or King of Heaven, and Park Joon-gyu as a rather crotchety King of the Underworld.

Warning: Spoilers for the first four episodes ahead.

Arang (Shin Min-ah) was the daughter of the magistrate before she was murdered in a mysterious manner. She has returned as a ghost attempting to plead with the following magistrates to find her murderer as she has no memories of her own to fall back onto. However, the previous three died. Thus, enter Lee Eun-oh (Lee Jun-ki), son of a prominent noble and a peasant woman (or servant). He’s on journey with his faithful manservant Dol-swe (Kwon Oh-joong) to find his mother, who disappeared from her previous residence without leaving many clues behind. Through an unexpected series of events, Eun-oh becomes the new magistrate and decides to help Arang with her mystery for the sake of finding his mother: Arang claims to have awoken as a ghost with the very same hair adornment that Eun-oh had given his own mother. As such, his belief is that helping Arang retrieve her memories and find her murderer is the way to find his mother. 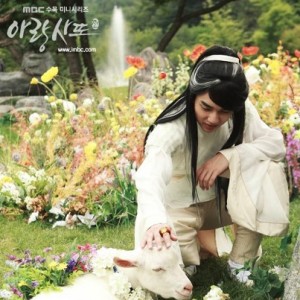 After numerous tiffs with the grim reapers and shifty shaman magic, Arang is able to strike a deal with the King of the Underworld and the King of Heaven: return to Earth as a human and kill your killer within three months or receive special punishment in Hell. Add in a town where a certain noble, Lord Choi (Kim Yong-gun), controls important aspects of life, the mysterious son of that noble, and the other ghosts in town, Arang and Eun-oh have their work cut out for them.

Arang and Eun-oh are running blind from the start. There are little leads to their investigation, and some leads are found to fall through rather quickly. Each necessary character has more than one persona–the one from three years ago and the present one. The drama has developed most of the present ones but has touched little on the ones of the past, which is reasonable for four episodes. More supernatural elements also seem to be at play, with the effect of peach blossoms, red beans, and the ability for a body to stay preserved for three years, so I look forward to that development; that is, as long as the drama doesn’t end with some contrived intervention.

This drama isn’t a serious one. While the major themes hold severity, the way the action is carried out is comedic and without stress, often in a bizarre way that is thoroughly enjoyable. The fight scenes are realistic–except for those awkward jump motions–and the whimsical music that sometimes accompanies them creates an every day ruckus rather than a fight for life or death. Along the same note, the effects presented can seem a little cheesy when first seeing them, but they do make the drama a fantasy and aren’t overdone. The grim reapers’ ghost collectors as well as signs of the shaman’s magic when capturing the grim reaper are tastefully done.

Speaking of the shaman, Hwang Bo-ra does a wonderful job as the reluctant accomplice to Arang’s deeds. As a conduit of magic that herself cannot see ghosts and can only see them, it must be trying to act as if can’t see Arang, but she does it well. 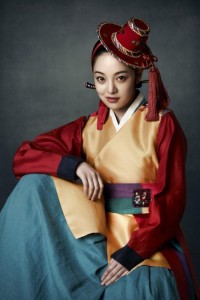 In fact, nearly all the actors of this drama have been acting well. The chemistry between Arang and Eun-oh is very present, and their arguments are all the more amusing to watch. Arang is a determined spitfire while Eun-oh is determined to not involve himself with others. The loyalty and care between Dol-swe and Eun-oh is also evident, especially in the doggedness with which Dol-swe fights to keep the body of Arang (now identified as Lee Seo-rim) from Lord Choi. Even with the shaman and Arang, there’s the sense that although the shaman continuously tries to get rid of Arang, if Arang didn’t turn to the shaman for her desires, the shaman would be rather lonely. Also, the King of the Underworld and the King of Heaven are a joy to watch as they continuously play badook. While they do take their positions seriously, they also argue over petty things and act greedily or greasily in certain situations. And lastly, those three assistants to the magistrate are a comical trio. Underlings of Lord Choi and Eun-oh and the magistrate, they are caught in quite the hard place and find it difficult to save their own skin.

Episode 3 really pounded home the sense of mortality for any being, even when that being has been living as a ghost, unseen by humans, for three years. Death has a sense of finality that turns regretful and sorrowful when it arrives in an unpleasant and unrecognizable way. And in Episode 4, when Arang can finally see herself in the mirror, it’s not the fact that she’s pretty that she marvels over, it’s the fact that she has evidence that she’s really human. It’s a chance at the life she can’t remember, even if it’s for a short time and filled with purpose. Thankfully, even after Arang’s identity as Lee Seo-rim is discovered, no one calls her by that name. Had they done so, I might have torn my hair out with frustration considering Arang is most likely only similar to Lee Seo-rim in appearance because of those lost memories.

My only complaints are minor. The scene with Eun-oh and his mother was necessary, but a tad overdone and unfortunately flat as a result. It also would have been more useful to show that hair-accessory moment in the past rather than at the moment of relevancy. Also related to Eun-oh, it baffles me that no one in the town has yet to check up on his family history. His source of power is that he’s the son of an influential noble, yet no one seems to have confirmed this fact. In addition, while Arang has been human for less than an episode, it’s surprising that none of those that saw her face on the dead body have made the connection. This could be magic at work, but I’d like that to be more explicit. Regarding the cinematography, there are some moments intending to show expression or emotional conflict that run just a little too long. This is really minor and odd to bring up, but I found that they broke the flow an episode had wonderfully built up when they lingered just too long on Lee Jun-ki’s face: he’s attractive, but I’d rather see more plot unfold. 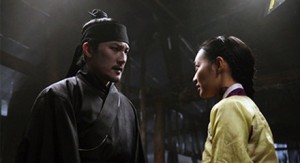 The first four episodes left me with more questions, like any good drama does. The ending implying that Lord Choi’s son, Choi Joo-wal (Yeon Woo-jin) is embroiled in something rather fantastical was expected, considering the numerous warnings about the full moon plying his scenes, but also curious is the head grim reaper, played by Han Jung-soo, who was responsible for bringing Arang out of the human world in the first place and still has not caught her yet. All the characters are very much tangled in a web, and it will be very interesting to see how each pertinent member is related to Arang as Lee Seo-rim and what role they may have played prior to her death. The concept of investigating a situation from three years ago, of delving into connections that haven’t been touched for a while is complicated, and I’m eager to see how it’ll happen.

This drama is very much recommended and hasn’t gotten too far in, so catch up quickly if you haven’t already been keeping up!