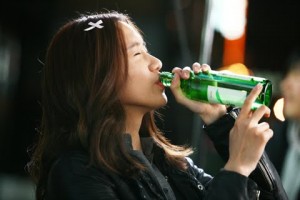 Avid fans of Korean entertainment will be well aware of the slim green bottle filled with clear liquid.  It makes its appearance in many forms, especially in dramas and movies; sometimes, it will sit near a babbling and/or sobbing woman who will naturally need to be carried off to safety by some handsome leading man, while other times it is found in abundance alongside middle-aged men who sit together at a restaurant, gradually growing louder and more merry until a fight inevitably breaks out.  Occasionally you’ll see Lee Hyori or UEE waving one around and looking entirely too happy for someone who is probably going to have a raging hangover in the morning.  Of course, I am talking about soju, my friends — the Korean liquor of choice, an alcoholic product traditionally made from rice and often consumed neat (i.e. straight, without ice, without mixing, no frills).  Soju is at the root of most adult social gatherings and 99% of bad decisions made in Korean dramas (hyperbole intended, but you get the point).

Dramas and movies might present comically exaggerated scenarios involving soju and the consumption of alcohol, but they are undeniably grounded in reality.  So let’s talk drinking for a hot minute, shall we?

Let’s start off with the alcohol itself.  We’ve already covered the infamous soju, which is perhaps the easiest to spot, but what else are Koreans drinking?

The above list is by no means complete, but these beverages are perhaps the most common.  Koreans will also occasionally (and with greater frequency these days) drink wine, too, but unless you’re eating Korean barbecue, wine might be an odd choice — my friends and I generally agree that most Korean soups and stews taste horrible with a wine accompaniment.  Your mileage may vary.

Koreans drink in all sorts of social circumstances; a bottle of soju will almost certainly break the ice or make merrier any sort of gathering between friends and family members.  However, alcohol also plays a large role in work culture in South Korea.  Workplaces can be dominated by excessive displays of formality that prevent friendships (or even polite acquaintanceships) from forming, so departments will often hold mandatory group dinners, called hwae-shik, for colleagues to relax and get to know each other after work has ended.  Hwae-shik are infamous for the involvement of alcohol, largely because it helps to break down the social barriers present in the office — and often the youngest or newest workers in the department will be the drunkest after the evening has ended (only after much cajoling from older or more senior employees, of course).  Hwae-shik horror stories are a dime a dozen, for they often result in male breadwinners staying out all night and arriving home drunk to their wives and children — but that’s another blog post.  I’m sure you’ll be able to spot a hwae-shik taking place in a drama near you with very little difficulty. 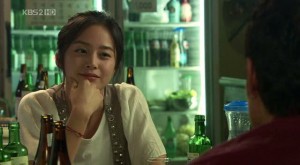 Korean students will often drink in events organized by school organizations, called MT in Korean.  Like hwae-shik, MT are intended for new students and older students to have the opportunity to mingle and get to know one another in a less rigid environment.  Unfortunately, there is often an element of hazing implicit in many MTs, and you can probably guess which students wind up being the victims.  New students will often be asked how much they can drink and then put to the test.  The standards do vary in terms of how much men and women are expected to drink, but drinking is by no means limited to males only.

Though there is much more that could be said about Korean drinking culture, we hope that you’re a little less in the dark after reading this post!  Questions or comments?  Leave them below — and easy on the soju in the meantime, okay?