A Man Of Many Masks: Han Geng's "Clown Mask"

It’s been almost three years since that faithful day in December when it was announced that Han Geng was filing a lawsuit against SM and leaving Super Junior. Like 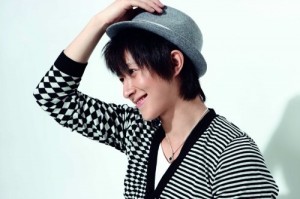 Jaejoong, Junsu, and Yoochun before him, Han Geng felt that his contract with SM was unjust, and after the courts ruled in his favour, Han Geng returned back to China to the dismay of his Korean fans.

To be honest, I was a little worried about Han Geng’s career post-Super Junior. During his time with Super Junior, Han Geng’s voice was pretty weak, especially in comparision to the other weak vocals left over in Super Junior. His dancing skills are commendable, but his absence in Super Junior isn’t a great loss musically. His departure didn’t made that much of an impact in the vocals department then if, let’s say, any one of KRY had left instead. However, what Han Geng lacks in vocal talent, he gains with loyal fans. Despite his difficult time in Korea, his time spent with Super Junior helped him gain a considerable fan base in China, especially with the promotions with their sub-unit Super Junior-M, which he was front and center of.

His fans — Gengfans as they like to call themselves — were extremely supportive and loyal to Han Geng, some going as so far as writing a song dedicated to him, “Wings Of Love,” which was included in his first solo album Geng Xin. Because of the support, Han Geng was able to get a lot of success from his first solo album and gained a lot of exposure in the mandopop scene. He garnered a lot of attention, and popularity awards, and even landed  several acting roles and commericial contracts. Thankfully, Han Geng was able to maintain a fairly successful career post-Super Junior. He’s not taking over the mandopop scene by storm, but he’s done well for himself, especially considering his vocal skills. To be fair to Han Geng, pop music doesn’t require you to have the best voice around. You can easily sing like an angel and never make it at all. The key is to be likeable, and that’s what Han Geng is: a likeable little dancing machine, and the fans love it. Oh, and having a nice face doesn’t hurt either.

Regardless, I was still a little wary at how well the title track of his upcoming album Wild Cursive, “Clown Mask” would sound. “My Logo,” his title track from last year, had a catchy hook and some nice choreography, but was forgettable. “Clown Mask” is just as heavily auto-tuned, but surprisingly catchier. But what makes the song even better is its music video and lyrics.

The central theme of the MV is confliction and one’s true self conflicting with the mask one assumes to conceal their true self. Han Geng 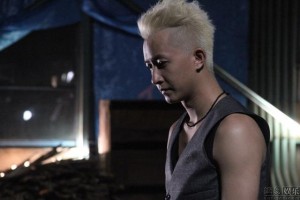 plays what seems like an android version of himself, who looks like he’s on a quest to find the perfect mask, to create the perfect human. But every time he tries on a mask, his body struggles in what seems like a reverse case of graft-versus-host disease as  the host body rejects the masks.  When one does take, it’s hard for android Han Geng to adapt. A more human version of Han Geng appears from within android Han Geng,  and despite its supposed imperfections, human Han Geng is able to dance with ease, while android Han Geng struggles. This scene could be a metaphor of how our “perfect” masks are never truly perfect. Our masks limit us emotionally and physically because we’re not being true to ourselves. We come across as stiff and uncomfortable, but when we get to be ourselves — the so-called imperfect selves — we can easily let loose. The two Han Gengs show the divide between reality and fantasy, and the ambiguity of that divide; are our masks fake or facets of our true selves? One of the lyrics of the song alludes to this:

Illusions and reality are all tangled anyway.

In parts of the MV, android Han Geng feels like his world is falling apart and he continues to struggle with the mask. The scene where android Han Geng throws up his hands in resignation while glass or rain falls around him could be a metaphor for a person succumbing to a mask. At the end of the MV, there is a shot of a television where human Han Geng seems to be preparing a masterpiece of himself. Aftewards, the camera cuts to android Han Geng smiling. This could mean that he has finally realized that it is he who is behind the creation of the mask, that he is the one who is control, and is not bound by the mask. Or he could be checking himself out.

Although the special effects and editing are slightly cheesy and the scenes with the multiple heads look like they were ripped out of the first Spy Kids movie, Han Geng’s acting is surprisingly good. The make-up makes his skin appear synthetic, fitting for his role as an android. The music really fits with the robotic theme of the MV and the pace of the song matches the editing. Some of the synths sound like a pulse, and the airy voice in the background gives it a haunting quality. This set is very gritty-looking, especially in the underground dance battle scene, and gray, with all of muted colors. The only source of color is Han Geng and his masks, and it gives like the MV a post-apocalyptic vibe.

Despite having no clowns in the music video, sadly, the theme of the MV is reminscent of a sad clown painting. The mask of a clown, which is percieved 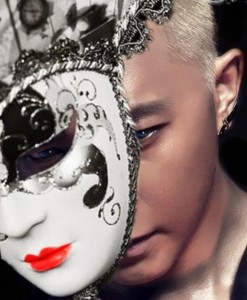 as being happy, conceals the sorrow of the soul behind it., sorrow perhaps stemming from having to hold up a facade of happiness.

The clown mask laughs more happily than anyone,
But it can’t hide the eyes that are red from crying.

The depth of the lyrics and the MV are refreshing to analyze, a complete contrast from “My Logo.” Although its symbolism is a bit obvious at times, figuring out each symbol means at a deeper level is thought-provoking. But my opinions on the MV are ever-changing. With each view of the MV, the meaning behind it can change by paying attention to every minor detail. The continuity and the strong flow of the MV is an added bonus, and everything has its place. This might be the first MV that makes the song instantly better, but I’m curious about what kind of choreography Han Geng will do with the song.

I’m really glad that Han Geng is doing considerably well post-Super Junior and post-SM, and hopefully “Clown Mask” and its MV will provide more attention and success for Han Geng in the future.

Traveling Back to “Youth: The Best of Times” with Han Geng