Welcome to Seoulbeats‘ first installment of Fashion Spotlight, where we’ll focus on the style of a particular group or idol. To start off, I’ve decided to praise the fashion style of Infinite’s Sungjong.

Usually when people think of an fashionistas in K-pop, they’ll think of Big Bang’s G-Dragon or SNSD’s Jessica. Without a doubt, these two idols have great style — some may disagree about G-Dragon — but they’re not the only idols that manage to look effortlessly fabulous 24/7. Sungjong’s casual, classy, vaguely feminine style has often made him stand out among his band mates when it comes to fashion. Sungjong generally combines simple cuts, colors, and patterns to off-set his style. Rather than enhancing his look with accessories, Sungjong lets his clothing stand out by wearing one striking piece, like a brightly colored shirt. Fit is also important — skinny jeans or Bermuda shorts and loose-fitting shirts are the norm for Sungjong. 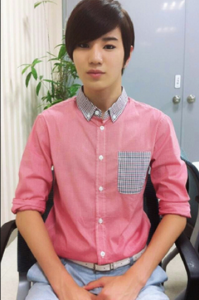 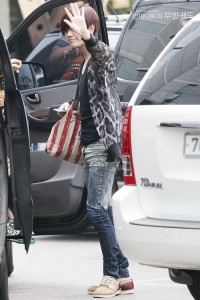 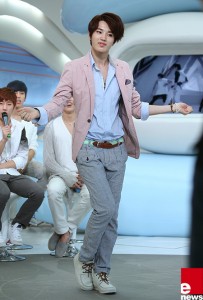 Perhaps the most noticeable thing about Sungjong’s style is how often he wears pink. He frequently wears black as well but salmon-pink appears to be one of his favorite colors, him having more multiple pieces of clothing in that shade. Above, on the left-hand corner, we see Sungjong in one of his prim button-up shirts — he frequently wears dress shirts — this one with a sketchy pocket and matching collar.  The brightness of the shirt is further enhanced by Sungjong’s pale blue shorts. In the center picture, Sungjong wears a much less colorful outfit, instead opting for a sheer leopard-printed cardigan, ombre skinny jeans, and a black tank top. His earth-colored shoes don’t entirely match but add an interesting contrast to the otherwise dark outfit. In the final picture, Sungjong looks like a young urban professional in his grey slacks, blue shirt, and pale pink blazer. The cuteness of the color scheme is contradicted by the masculinity of the clothing’s style. 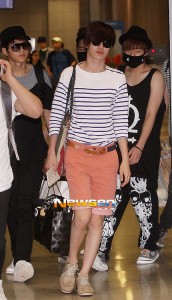 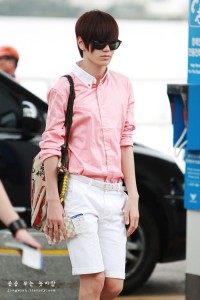 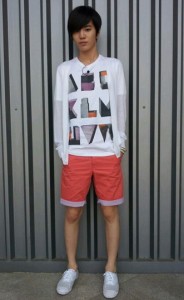 Sungjong’s salmon-and-striped airport outfit is a personal favorite of mine. It’s a very preppy look and I love how the brown boat shoes go with the pink shorts. Sungjong appears to have a preference for knee-length shorts because he wears them very often, like in the next two photos. In the center photo, Sungjong wears crisp white shorts and a silky pink shirt with a pair of black shades. A simple outfit but classy and the colors look great on him. The fit is fine, too, not too tight nor so baggy that it swallows him. Sungjong has a tiny figure by nature — his twenty-four-inch waist can attest to this — and so poorly fitted clothing could either bury him alive or cause him to look emaciated. Luckily, Sungjong smartly wears clothing that is a little loose but form-fitting, often more tight around his hips and waist to display his figure. 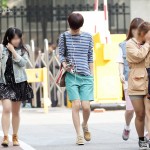 One of my favorite outfits Sungjong has worn was his blue outfit worn on the way to Music Bank and to a radio show a few weeks ago.  Sungjong wore what he typically wears, belted Bermuda shorts and a loose-fitting top along with his favorite shoes, but the color scheme of it pleased me. Mixing two different shades of the same color can be overbearing or clashing, but Sungjong’s navy-striped shirt and aqua-blue shorts went surprisingly well together.

Sungjong is one of my top fashionistas in K-pop. His clean, preppy sense of style has endeared me and always causes him to stand out a little amid his other reasonably well-dressed band members.

Do you like Sungjong’s style? Who else has great style in K-pop?